Letter From the Editor

Wave after wave builds the tide. When the Asian American Arts Alliance (A4) was established in New York City in 1983, it was created to meet the needs of a rapidly growing cultural sphere that required resources and support. There was a wellspring of Asian American artists creating works that would become part of the bedrock of how we, as a community, would come to understand ourselves.

Edward Said had recently published the groundbreaking “Orientalism,” laying the foundation for post-colonial studies. Theresa Hak Kyung Cha wove together worlds and ages to describe the elusive experience of being an immigrant in “Dicteé.” Christine Choy had begun directing some of her first documentaries advocating for the rights of Chinese American workers. Artists like Tomie Arai and Nina Kuo explored AAPI feminism in thrilling multimedia paintings. Corky Lee’s photographs captured the lives of everyday Asian Americans, pushing back against monolithic perceptions.

A decade earlier, in 1972, Basement Workshop—the same grassroots arts organization that would birth A4—published “Yellow Pearl,” a portfolio of works by over 30 emerging Asian American artists that included writing, music, and visual art. In its introduction, the collection’s authors explain how this body of work is “an expression of an emerging consciousness of being Asian in America.”

“We need to write about the [Vietnam] War, Attica and our people’s history,” it reads. “We need to express our loves, our loneliness and our dreams. Through ‘Yellow Pearl,’ we share what we feel, what we think, and what we are with our brothers and sisters.”

50 years after its publication and 40 years after the founding of A4, we are experiencing a similar watershed moment in Asian American history and culture. Now the wave is even bigger and farther-reaching. To my mind, there hasn’t been any other time that AAPI art and artists have been this visible and supported. And just as “Yellow Pearl” celebrated the Asian American identity of its time through the promotion of its culture, so too does the Amp.

In an original photo essay, Sunny Shokrae shares the experience of attending Disco Tehran in solidarity with Iran’s current wave of protests as an Iranian American. Writers Ryan Lee Wong and Hua Hsu tell us how writing such specific coming-of-age stories as AAPI would have felt unimaginable 20 years ago. Vrinda Jagota gives us insight into how the musician Sirintip interpreted climate change data into music for her upcoming album. Jacinda Tran documents how an exhibition at a NYC courthouse speaks to Corky Lee’s continued, reverberating legacy. Mira Dayal muses on how Bharti Kher’s Ancestor (2022) explores the dualities of Indian motherhood.

Despite the enormous range of diasporic cultures, religions, and histories, what binds Asian Americans together are the experiences shared in the United States. One such experience is that of erasure. In addition to celebrating the AAPI cultural community, The Amp also serves as a record, capturing these conversations, happenings, and works for audiences today and, perhaps more importantly, in the future.

Here’s a funny thing: I’m writing this editor’s letter while visiting Seoul where I’m finding the term “Asian American” to be… confusing. The American part is obvious. But Asian? As in, the whole continent? When I try to explain this magazine to distant relatives, it takes them a second to remember that, in the United States, I am an Other. But in having to explain this to my non-diasporic family members, I am simultaneously reminded of exactly why this identity continues to be so critical and empowering.

By extension, it has affirmed why it’s so important for a magazine like The Amp to exist: to cultivate an understanding of what this identity and experience means. To give voice to our artists and recognize our vibrant complexities and multitudes. To let the world know who we are on our own terms, for generations to come. 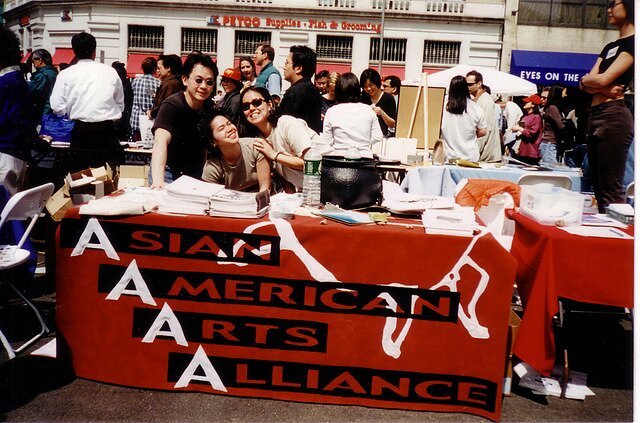 Members of the Asian American Arts Alliance in 1989, soon after the organization officially changed its name from The Alliance. Image courtesy of A4.
Share
FacebookTwitterEmailCopy Link
Next Story