I meet musician Sirintip (she/they) on a relentlessly sunny morning in October following a week of cold rain. We settle into the outdoor tables at PlantShed, a Lower East Side cafe and plant store filled with 8-foot-tall fig plants, temperature-controlled glass cases full of glossy anthuriums and roses, and terra cotta pots and essential oils. They picked the spot partly because she loves plants and partly out of convenience—it’s en route to the Red Hook studio where they will be producing actress Melanie Smith’s forthcoming album later in the day. She is dressed impeccably in black leather pants, a beige tailored blouse with puffy sleeves, tortoiseshell sunglasses, and red lipstick.

Sirintip’s mother is Swedish and their father is Thai. She was born in Bangkok, Thailand and lived there until they moved to Sweden when she was 11. After studying music in undergrad, they moved to New York City to get a masters degree in jazz at the Manhattan School of Music, and she has been living in the city ever since.

When we meet, Sirintip is a few weeks away from releasing their sophomore album, carbon. At a cursory listen, it could be described as a collection of love songs. On “oasis,” they sing about someone being their “castle in the sun” with a lush grandeur evocative of R&B crooner Snoh Aalegra. “red eyes” appears to be a euphoric pop anthem about breaking free from a toxic dynamic with someone. But these lyrics are a Trojan horse. Every song on the album is actually inspired by a topic related to climate change, from air pollution to rising global temperatures to the poaching of Thai tigers.

Their interest in creating politicized music began when she was a high school student living in Sweden. They wrote a song for a school fundraiser following the 2010 earthquake in Haiti. Though she admits the songwriting was “really on the nose,” they found that the music and message really resonated with her audience. On her 2018 debut album, they included an environmentalist song called “In My Garden,” which was about the hope she feels when planting seeds in the winter knowing that they will bloom into flowers in the spring.

Fittingly, that song itself was a seed that would grow to inspire carbon. “I noticed that when I was very clear in my message, a lot of people would tune out because it was too much for them,” she tells me. “It wasn’t until 2019 that I came up with the idea of building the concepts into the music.” During the beginning of the pandemic, they treated their studio as a sort of laboratory, spending every day researching a different topic. “That process was very liberating for me,” she adds. “I never went into my music studio trying to write a good song. It was more like, ‘How can I use this topic and turn it into music?’”

Sirintip’s sophomore album, carbon. Album artwork designed by Nitcha Tothong.
“When you’re reading numbers as someone who’s not a mathematician or a scientist, you don’t understand what you’re looking at. But when you turn it into pitches, now you can hear it.”
On “plastic bird,” a song about plastic pollution, they took trash from their kitchen and turned it into instruments. Elsewhere, her approach is impressively technical and methodical. On “1.5,” she pulled information about global temperatures from 1880 through 2012 from NASA’s website and then used a computer program called TwoTone to assign every temperature a tone. They then recorded their vocals one note at a time and sampled those recordings in order to make it sound like she was communicating data. Finally, they chose to write the song using the Dorian minor scale which, like all minor keys, is generally melancholic but, according to Sirintip, “is happier because it has major sixths.” She wanted the song, and her music in general, to “express that ambiguity that yes, we are dealing with warmer weather, but it is important that we have hope.”

Beyond motivating her listener into action, Sirintip sees their work as a way to concretely conceptualize information that might otherwise feel too abstract. “When you’re reading numbers as someone who’s not a mathematician or a scientist, you don’t understand what you’re looking at. But when you turn it into pitches, now you can hear it,” she says. After receiving a grant this past July to join 25 scientists in Oregon who were studying plankton, they turned 1.5 seconds of data captured from an underwater imaging system into another song on the album.“I represented the value of the biomass of the plankton,” they explain. The larger the number of plankton, the higher the intervals between notes would be, allowing us to clearly hear when large masses of plankton were encountered. “Art and music make these really difficult scenarios or facts become more comprehensible,” she says.

While Sirintip rooted much of the work on this album in science, her practice is not solely data driven. It’s important that her art is as poetic and personal as it is informative. For example, on “1.5”, they didn’t play the notes associated with each year linearly. Instead, she chose to focus on years that were significant to them and to the world.

“I once asked a scientist who is also a musician what the biggest difference is between being a scientist and being an artist. She said science can be very creative but there’s no room for self expression. I think for art to move people, you need self expression.”

Sirintip’s mixed heritage and global upbringing are also expressed in her music. While they sing primarily in English, their songs are often supported by backing vocals sung in Thai. The song “red eyes” is a particularly poignant fusion of their cultural influences. She was curious about endangered Indo-Chinese tigers in Thailand and decided to write a song from the animals’ perspective as they saw the red lasers from the guns of hunters who were poaching them. She sees the song as a metaphor for the tokenization people of color often feel when they are dismissed but also upheld as trophies when they succeed. The song also incorporates Thai percussion and a Moog that pianist Kengchakaj Kengkarnka set to a 14-tone Thai tuning system.

“I once asked a scientist who is also a musician what the biggest difference is between being a scientist and being an artist,” they say. “She said science can be very creative but there’s no room for self expression. I think for art to move people, you need self expression.”

Throughout our conversation, it gets hotter and hotter outside. So much so that, between peeling off layers of coats and sweaters, Sirintip and I mention how fitting it is to discuss climate change on a day that’s so unseasonably, alarmingly warm. The sunlight is stark, illuminating the gold eyeshadow dotting the corners of their eyes and giving the sidewalk a high-contrast, film noir look.

We wrap up our conversation and amble around the PlantShed cafe as we discuss Sirintip’s upcoming performances in the city and the multimedia suites about climate change that she plans to create during the next few years. An expert on houseplants, they advise me to stop over-watering mine if I want to keep them alive, and someone working at the store offers us two opulent pink roses for free. Despite the latent anxiety stemming from subject matter at hand, it’s a lovely morning, full of excitement and hope.

–Vrinda Jagota is a writer living in Brooklyn. Her interests include, in no particular order, South Asian American music, Taylor Swift, and trying to understand why everyone started self-identifying as an empath a few years ago. 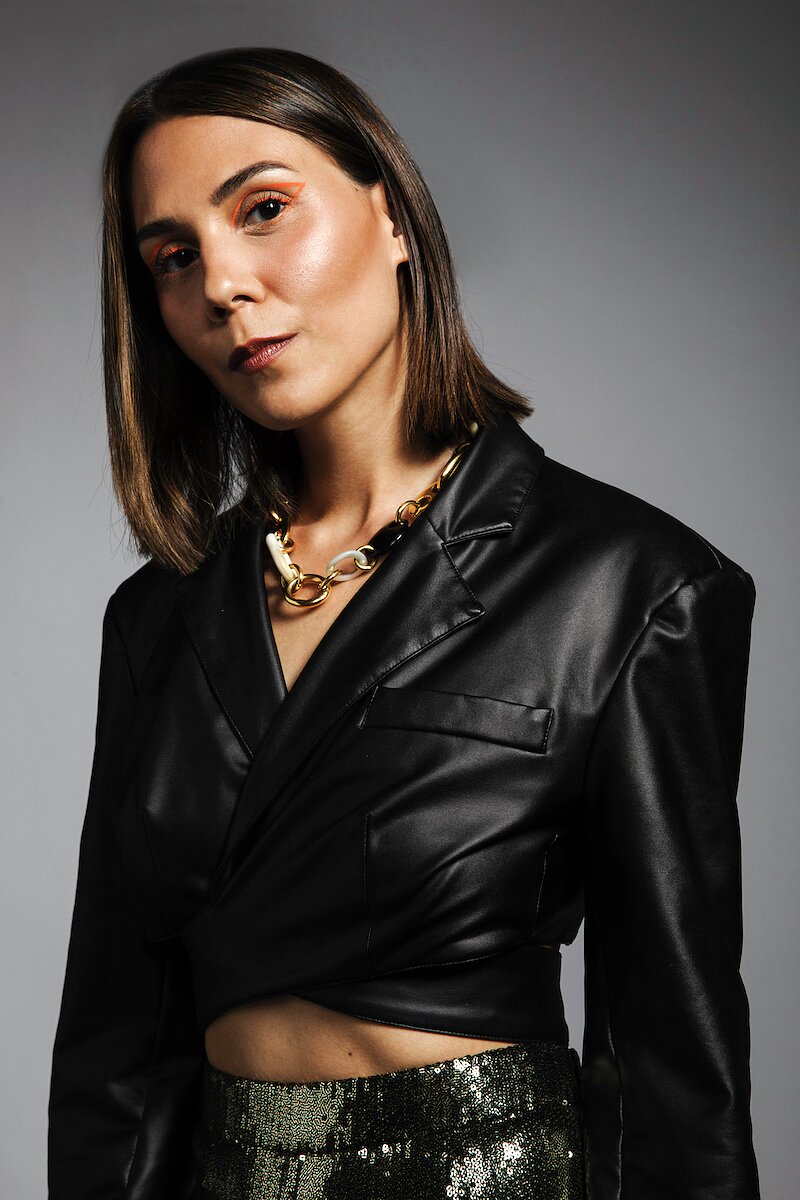