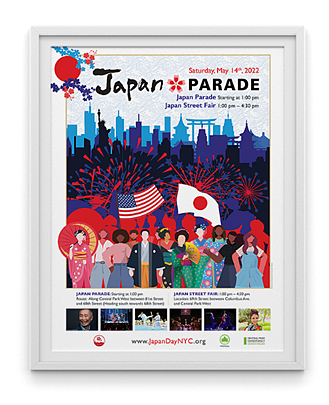 The Japan Parade will show the New Yorkers the comprehensive appeal of Japan. Everything from drums, dance, and martial arts to animation. This event will also further strengthen Japan-US exchanges.

We organized this street fair near the end of the Parade route to showcase the delicious Japanese cuisine. The theme will be “Festival Yatai (Outdoor) gourmet” and will introduce various Japanese street foods such as Ramen, Soba, Okonomiyaki, and more with the cooperation of local restaurant officials. In addition, Japanese tea will be provided by a donation from a company that supports the Japan Parade.

Furthermore, we will have a few activity tents including a tote bag charity tent. In conjunction with the Central Park Conservancy, we have put special effort into various initiatives to help maintain our beautiful home park, including planting cherry trees in the park. This year, we are collecting donations that will go toward supporting Ukraine.

George Takei will serve as the parade’s Grand Marshal and Sandra Endo currently with Fox 11 News Los Angeles will MC the event.