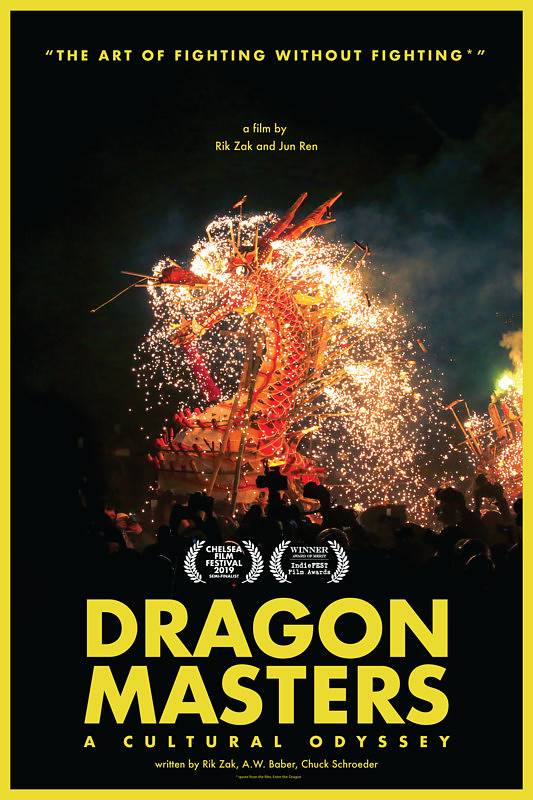 DRAGONMASTERS: A Cultural Odyssey is the untold story of the Chinese dragon in America. When this symbol of good fortune and benevolence first arrived, it found communities in trouble and was soon employed by their handlers to battle prejudice, violence, and exclusion. A mix of documentary interviews, archival material, and vérité footage, this 67-minute “authored-documentary” film has multiple storylines that capture the evolution and cultural impact of the Chinese dragon and its Masters in America. It is filmed in six locations (New York, California, Canada and China).
The director’s talk will be co-hosted with 21 Pell Street. When you sign up for this event, you will receive a link to watch the movie at your leisure. You’ll then receive a link for the talk an hour before it starts.
Rik Zak is an award-winning creative director and Professor Emeritus at the Alberta University of the Arts (AUArts). Currently, he is a Creative Director at Schroeder Inc., a New York content and brand development agency with clients worldwide. Rik has practiced and researched Chinese dragon dancing in New York and its related traditions with Shifu Chia Meng Woo (胡介民師傅, 1913 -2010) for over 45 years. Shifu Woo was a Shaolin Master teacher who had studied and practiced traditional dragon dancing in Shanghai during the 1920s and 1930s then taught for 40 years in New York City. Rik has taught and coached a dragon team in Calgary and New York for over three decades.
Jun Ren (任俊) is an NYC/Shanghai-based creative director and film director. He has a bachelor’s degree in design and a master’s degree in film directing from the School of Visual Arts in New York. His mission is to build a bridge between progressive Eastern and Western media creatives and connect next-gen audiences of all cultures.
David Y. Lei (李萱頤) In 1964 David organized his first dragon team for the Chinese New Year Parade in San Francisco and became the Chinese New Year Parade director in 1977. He continued to manage the Chinese new year parade until a decade ago. In 1966 David co-founded the Chung Ngai Dance Troupe, a nonprofit performing arts and martial arts organization that continues to provide free dance lessons to Chinatown youths. He is the founding board chair of the Chinese Performing Arts Foundation in 1994 to help fund Chinese performing arts and conduct/publish research including on lion and dragon dancing. In 2014 David put together the team to restore the oldest surviving Chinese performance dragon in the world for the New-York Historical Society’s exhibition “Chinese Americans: Exclusion/Inclusion” - this dragon named “Moo Lung” (舞龍) is now on permanent display at the Bok Kai Temple in Marysville California. David has a passion for building communities, youth education and the arts and is/was on the board of the following: The Chinese Performing Arts Foundation, Asian Art Museum, The Chinese American Community Foundation, Academy of Chinese Performing Arts, World Arts West – San Francisco Ethnic Dance Festival, the Bancroft Library, the Asian Chefs Association and the Center for Asian American Media. His current passion is to Interpret Chinese art/culture/rituals in the American context. For additional bio: http://www.chineseamericancf.org/leadership

CHINATOWN ARTS WEEK is a festival celebrating the cultural richness of Manhattan’s Chinatown.T!C has produced several cultural events throughout the week, all of them are free to the public. By presenting grassroots Chinatown artists and emerging Asian American artists in the same context, we hope to bring the generations together and connect with a wider arts audience. ChAW also highlights cultural happenings presented by our neighbors, to increase awareness of Chinatown’s cultural assets. Beyond this week, we hope that visitors and neighbors alike will recognize and engage more in Chinatown’s cultural offerings.

Think!Chinatown is a 501©(3) non-profit based in Manhattan’s Chinatown. Our mission is to build intergenerational community through neighborhood engagement, storytelling & the arts. We amplify the voices of our neighbors & advocate for equity in resources for Chinatown, honor histories that represent us & value intergenerational learning, and present grassroots arts of Chinatown & emerging Asian-American artists in context of each other. Think!Chinatown is here to listen, to respond, and to build Chinatown’s capacities as a strong & vibrant immigrant neighborhood of NYC. Find more about T!C and Chinatown Arts Week at: https://www.thinkchinatown.org/

Chinatown Arts Week 2020 is made possible in part with public funds from Creative Engagement, supported by the New York State Council on the Arts with the support of Governor Andrew Cuomo and administered by LMCC. It is also funded, in part, by a grant from the NYC & Company Foundation, Con Edison, and contributions from many generous business and individual supporters like you!