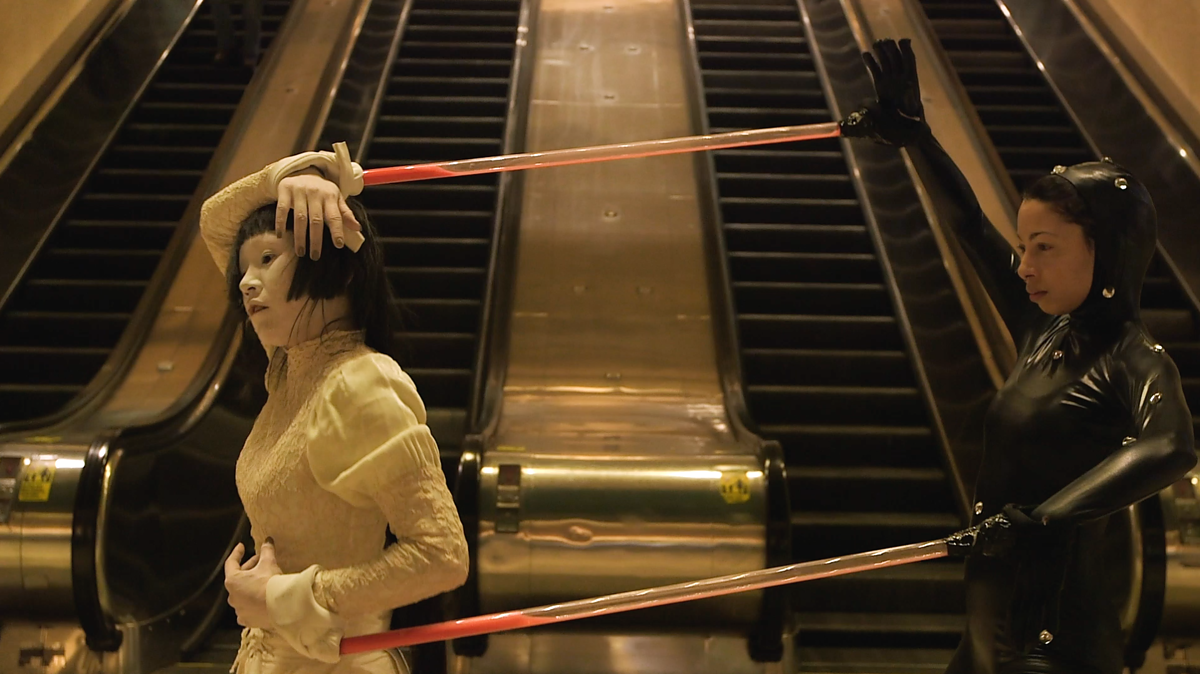 Vangeline Theater/New York Butoh Institute presents the New York Butoh Institute Festival 2020 online, October 15-25, 2020. The Festival will feature an exciting program of butoh workshops and exclusive Zoom performances of works by butoh dancers from Asia, Latin America, South Africa, New York, and the United States. Vangeline’s nonfiction book, Butoh: Cradling Empty Space, will also be released during the Festival with a free book giveaway. Tickets are $5-$10 and can be purchased at www.vangeline.com/online-tickets.

Festival Highlights
Thursday, October 15, 2020 at 8pm ET
Sitting with it, a collection of butoh short films via Zoom.
The six short films are a hybrid between film, poetry, visual arts, and butoh. The last four of the short films featured are a direct response to the 2020 pandemic.

Friday, October 16 at 8pm ET
Broken Body by Ruta De La Memoria (Chile) via Zoom.
Broken Body tells the story of three pregnant women who disappeared during the Pinochet dictatorship in Chile. Presented in association with Theater for the New City.

Saturday, October 17 at 5pm and 8pm ET
Live butoh improvisation by Yuko Kaseki (Japan) via Zoom followed by a discussion with the artist.

Friday, October 23 at 8pm ET
Red Flag on a Red Planet, live performance by Vanessa Skantze (Seattle), followed by a discussion with the artist.

Saturday, October 24, at 5pm and 8pm ET
Rising of the Unchained Silent Screams, a solo created and performed by Tebby W. T. Ramasike (South Africa) via Zoom followed by a discussion with the artist.

In partnership with the Hokkaido Butoh Festival, a free screening of Butoh dancer Saga Kobayashi’s 2020 performance will be available online during the festival. Kobayashi was a principal dancer of the founder of butoh Tatsumi Hijikata.

About the Artists
Sher Chew is a performance artist and butoh dancer from Singapore whose art practice is a persistent exercise in articulation. In defiance of the structural limitations of literacy and its inherent violence, she wields the materiality of the body as her primary mode of expression. In order to transcend her default physical vocabulary, she provokes new forms of embodiment by performing ritual interactions with symbolic objects or through applied constraints. By using her body as a site of negotiation, she rescripts innate patterns, seeking emancipation from deeply embedded genealogical systems of control. www.sherchew.info

Kori Koolman is a multidisciplinary artist and an art educator from Israel. She is based in New York. Her works have been exhibited and screened nationally and internationally, at film festivals and art institutions. For the past six years, she has been a student of the Vangeline Theater / New York Butoh Institute.

Yuko Kaseki is Butoh dancer, performer, improviser, choreographer and teacher, based in Berlin. She studied with butoh dancer Anzu Furukawa at Performing Arts Art University Braunschweig. She moved to Berlin in 1995 and founded the company
Cokaseki. Her works incorporate the spirit of butoh and borrow from Performance Art using objects, texts, and soundscapes. Her strong interest in breaking the border of physical existence leads to projects with mixed ability artists and performers. www.cokaseki.com

Stéphanie Larrière is a native French and Brooklyn-based teaching artist, educator, and performer who has been leading multidisciplinary dance and music groups in New York as a professional tap dancer. She has been discovering and embracing butoh dance over the last couple of years under the teaching and guidance of Vangeline and the Vangeline Theater/New York Butoh Institute, a revelation to her approach to dance and life. Over the last year, she has been integrating butoh into performances with musicians, singers, and light and shadow puppeteers.

Melissa Lohman is a performance, dance, and visual artist from New York City currently living in Rome, Italy. She completed her BFA in 2000 at the School of Visual Arts, NYC. She has been making solo work and collaborating with musicians, photographers, poets and visual artists since 1996. She creates pieces for theatrical and non-theatrical spaces. Among other disciplines she has studied, Butoh and Noguchi Taiso have informed her work. Melissa has been collaborating with Flavio Arcangeli since 2011. www.melissalohman.com

Nicholas Motyka was born and raised in suburban Western Massachusetts. Though his small town upbringing would be relatively standard, he began experiencing death from a very young age causing his already wandering mind to question life, its purpose and what might be beyond. Motyka’s fascination with the medium of filmmaking would grow exponentially throughout his childhood and teens eventually leading him to study at SUNY Purchase for only two years until dropping out in pursuit of a career in underground, independent filmmaking in New York City.

Azumi O E was born and raised in Kyoto, Japan. She is a former principal dancer of New York-based butoh company Vangeline Theater and performed with the company for over eight years. She worked as Butoh Master Katsura Kan’s assistant choreographer/main dancer on several world tours. As an expansion of her butoh career, she works as a dancer/choreographer for video sculpture artist Katja Loher, does collaborative work for MARCK’s video art and live performances. She is also part of a duo project with bassist Sean Ali, and is involved in many other interactive tech/sound/stage-visual projects, experimental film, and art/sound installations.

Tebby W.T. Ramasike, a South African choreographer, dancer, teacher/educator, researcher in dance, butoh practitioner, and cultural activist, arrived in Europe in 1995 after working with different theatre and dance companies in South Africa and abroad. In 1999, he founded TeBogO Dance Ensemble (TBO), renamed TeBogO Dance - TBO, which since its inauguration has been invited to perform and teach in Europe and abroad. A holder of an MA degree in Choreography from the Dance Unlimited Program in Arnhem, Netherlands, he was the first recipient of the international choreography bursary from the Michel Tesson Performing Arts Trust and subsequently the Creative Arts Foundation. In 2002 he became a member of World Dance Alliance Europe and currently, he is a member of UNESCO’s International Dance Council (CID). Co-authored an article on ‘Reverie’ for a chapter ‘Collaboration’ in the book, ‘Inventing Futures’. Currently, he is working on an interactive multidisciplinary crossover collaborative project and continues research on his concept of the Afro-Butoh.

Alana Rosa is an actress and butoh dancer from Brazil. In 2015, Alana received the award for Best Actress from the Brazilian Press Award. Alana has participated in the project Beyond Fashion at Garment District in New York since 2014. She has danced in the butoh offerings at Time Square lead by Vangeline Theater/New York Butoh Institute on September 11, 2016, and 2019, and presented her solo Between at the New York Butoh Festival 2018. www.alanarosa.com

Ruta de la Memoria, directed by Natalia Cuéllar, is a company from Santiago, Chile that mixes theater, butoh, and dance. Natalia Cuéllar, Actress and dancer, studied theater in Chile, and continued her artistic training in Europe, following the lineage of Grotowski. Later, she moved on to butoh, studying with different masters such as butoh dancers Makiko Tominaga and Minako Seki. In 2008, she founded the Ruta de la Memoria Company in Santiago, Chile, a company that focuses on the issues of gender, human rights, and memory. Cuéllar’s works have been critically acclaimed in Chile and dubbed "amazing" (Fabian Escalona), "impressive" (Marietta Santi ), "intense and shocking" (Pedro Labra Herrera - El Mercurio), and "spine-chilling" (Leopoldo Pulgar Ibarra). Since 2014, she has directed and organized the celebrated International Butoh Festival in Chile (FIBUTOH). www.fibutoh.com

Stacy Lynn Smith is a neurodivergent, biracial/Black dancer/performance artist specializing in butoh, contemporary dance and experimental theater, creating work through a unique lens of the "Other".  She was a principal butoh dancer with Vangeline Theater from 2008 to 2017. Most recently, she has been in a collaborative process with Jasmine Hearn, Donna Costello, Alex Romania, Rakia Seaborn, Jill Sigman/think dance, and Kathy Westwater. She is a member of the artist/activist cohort Body Politic. Stacy was selected by Eva Yaa Asantewaa as part of the curatorial board producing Black Womxn Summit and was awarded a 2020 Queens Arts Fund (QAF) New Work Grant.

Vanessa Skantze is a butoh artist who has performed and taught in the US and Europe for over 20 years. She became a student of Jinen Butoh founder Atsushi Takenouchi in 2003; having already co-created the sound/movement improvisation ensemble Death Posture in New Orleans. Currently based in Seattle, Washington, Vanessa is a co-founder of Teatro de la Psychomachia, a DIY space that has hosted national and international performing artists and musicians for more than a decade. Collaborations with sound artists have been a constant practice in solo and group performances; Vanessa embraces the art of deep listening improvisation as an essential communion with the body instrument and all life.

Vangeline is a teacher, dancer, and choreographer specializing in the Japanese art form Butoh. She is the artistic director of the Vangeline Theater (New York), a dance company firmly rooted in the tradition of Japanese butoh while carrying it into the 21st century, and the founder of the New York Butoh Institute. She is a 2018 NYFA/NYSCA Fellow in Choreography. Vangeline has taught and performed in Japan, Finland, Chile, Hong Kong, the U.K, Denmark, Germany, France, the U. S, and Taiwan. She is the winner of the 2015 Gibney Dance’s Beth Silverman-Yam Social Action Award and the winner of the 2019 Janet Arnold Award from the Society of Antiquaries of London. She is also the founder of the award-winning Dream a Dream Project, a dance program reaching out to the incarcerated population in New York since 2006. She is a member of the International Association of Dance Medicine & Science, and the author of the nonfiction book Butoh: Cradling Empty Space.