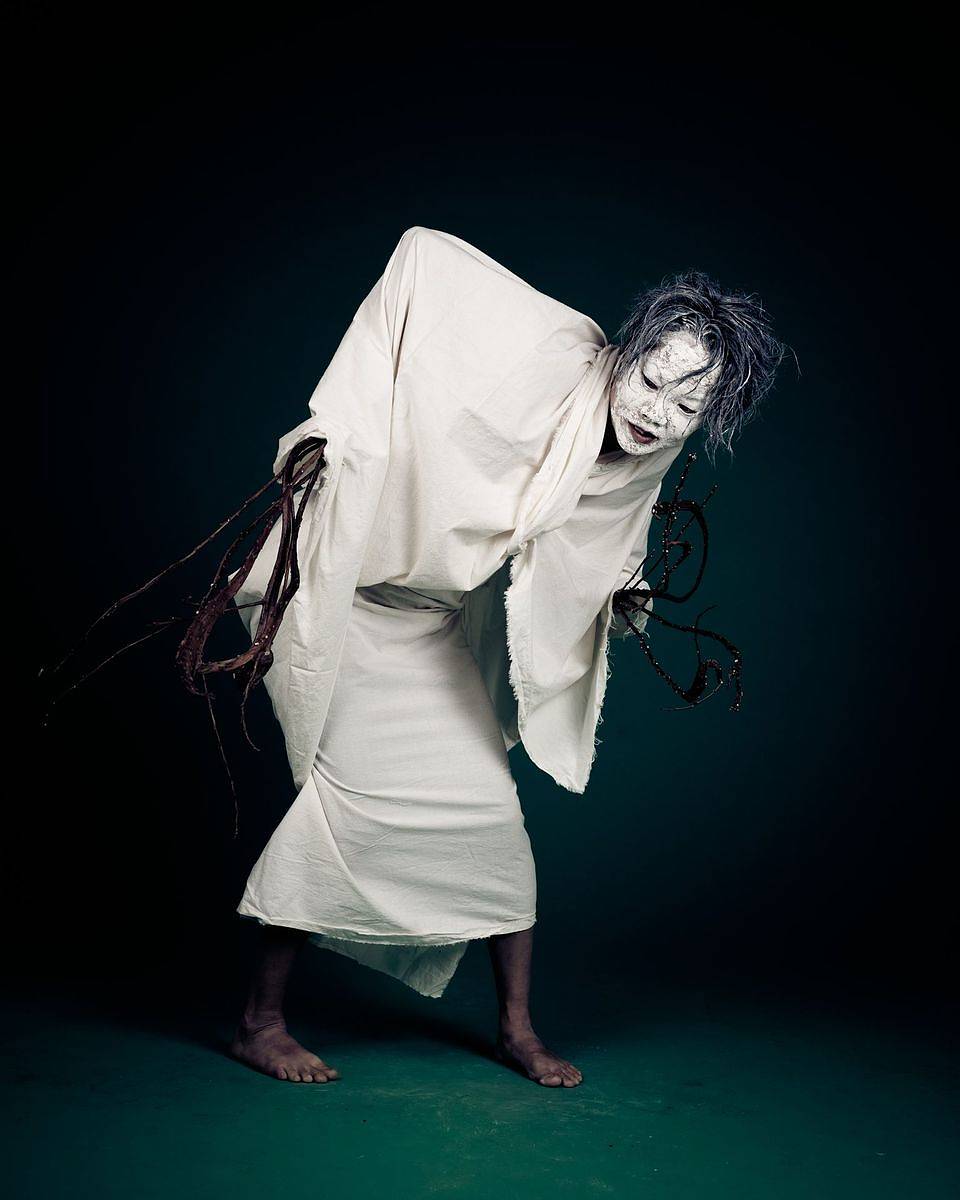 In celebration of Pride 2020, Vangeline Theater/ New York Butoh Institute is proud to present Queer Butoh 2020 (DIGITAL) in collaboration with Howl Arts. This year, we are proud to virtually present the works of Mee Ae, Dustin Maxwell, and Scoop Slone. At its origin, the introduction of Butoh in Japan was widely controversial. The first homoerotic Butoh performance, Kinjiki (Forbidden Colors) created by Tatsumi Hijikata in 1958, caused controversy amongst its spectators.
“Butoh is essentially the dance of the marginalized, and the LGBTQ population is still largely marginalized in the world,” says Vangeline, curator of this series. “This year, despite obvious challenges, it is particularly important to find ways to celebrate our LGBTQ artists for the 50th-anniversary celebration of Pride.” Artists Featured: Me Ae in Swoon; Dustin Maxwell in In a dark forest partly illuminated: portal, and Scoop Slone in Fragments.

Mee Ae is a Butoh-inspired Dancer and Choreographer.  She graduated from Bard College in 2000 with a BA in Drama / Dance, and landed in New York City in 2001.  In 2004 she began her training in Butoh with Vangeline, and her performance career with Vangeline Theater. Mee Ae currently lives in Ithaca, NY, and has been the recipient of several awards from Community Arts Partnership including the Artist in Community Grant, Strategic Opportunity Stipend, and the Fellowship for Artists.  Her work focuses on utilizing dance as an engine to empower and bring visibility to marginalized communities, through events such as The Arts & Mental Health, Queer Butoh, Ivy Q, We Step Into the Light, Dancing for Life, Go Go Go Variety Show, and One Out of Seven.
Dustin Maxwell is a movement-based visual artist currently living in New York City. He was born queer into a Mormon family of eight in Albuquerque, New Mexico, where he took his first ballet class at the age of three. As a teenager he studied modern dance and Barbara Clark’s somatic approach with his teacher, Joanne Emmons. In 2005 he relocated to Minneapolis, Minnesota, where he spent a decade studying dance and performing locally and internationally. He began studying Butoh with Gadu Doushin in early 2012. His work is sourced from ritual and sensitizing practices and aims to preserve those elements within “finished” works. Otherness, sexuality, spirituality, death and the magic of being are themes central to his art and life. His dances and performance installations have been presented in theaters, galleries, basements, alleyways and countrysides in Minnesota, New York and Germany.  He holds a B.A. in Dance from the University of Minnesota-Twin Cities. He is a 2019 Jerome Hill Artist Fellow and was nominated for a 2015 Sage Award for Outstanding Performer.
Scoop Slone’s creative practice explores identity, self-awareness, and self-actualization through performance, sculpture, and installation. Employing nonorganic modern materials that reference folk and primal tradition(s), Scoop investigates meaning and constancy as experienced through the solitude of alter ego, Geometrica 222. Character development draws on repetition, meditation, shamanism, sound, and phonation while referencing personal narratives, and genderfuck drag.
Scoop began an artistic career singing for Portland Opera and switched personas jumping into the NYC rock opera scene. Praised by NY Times for “gamely vocal stylings,” Scoop becomes known for vocal and character morphing in all genres of media/theatrical performance. An introduction to Butoh in 2018, coupled with costume/object fabrication, commenced a new artistic trajectory in Scoop’s artistic process and the public personification of Geometrica 222. July 2019 HEREarts debuted Future Perfect, with Scoop’s first Butoh performance exhibit and installation. Fragments is the second incarnation of that work in progress.

Vangeline (curator) is a teacher, dancer, and choreographer specializing in the Japanese postwar avant-garde movement form Butoh. She is the artistic director of the Vangeline Theater (New York), a dance company firmly rooted in the tradition of Japanese Butoh while carrying it into the 21st century, and the founder of the New York Butoh Institute. Vangeline is a 2018 NYFA/ NYSCA Artist Fellow in Choreography. She is also the winner of the 2015 Gibney Dance’s Beth Silverman-Yam Social Action Award and is the author of a forthcoming book about Butoh. www.vangeline.com

VANGELINE THEATER/ NEW YORK BUTOH INSTITUTE aims to preserve the legacy and integrity of Japanese Butoh while carrying the art form well into the future. The unique art of Butoh originated in post-World War II Japan as a reaction to the loss of identity caused by the westernization of Japanese culture, as well as a realization that ancient Japanese performing traditions no longer spoke to a contemporary audience. The Vangeline Theater is home to the New York Butoh Institute,dedicated to the advancement of Butoh in the 21st century.

Howl! Happening
Gallery | Performance Space | Archive
Like the neighborhood in which it was born and the Howl! Festival that began it all, Howl! Happening is a space of untamed creativity. Howl! Happening curates exhibitions and stages live events that showcase the historical legacy and contemporary culture of the East Village and Lower East Side. It  is  also dedicated to preserving the archives of artists who spent their creative lives working in this vibrant community and houses the Estates of artist Arturo Vega and  the  beloved  performance  artist,  Tom Murrin aka “The Alien Comic.” The history of the East Village is still being written. The mix of rock and roll, social justice, art and performance, community activism, gay rights and culture,  immigrants, fashion, and nightlife are even more relevant now and Howl! Happening aims to shine a light on artists from the past in the place where their art came alive and where they played and worked.  Howl! Happening is an Arturo Vega Project. Visit howlarts.org

This program was supported, in part, by public funds from the New York City Department of Cultural Affairs in partnership with the City Council.