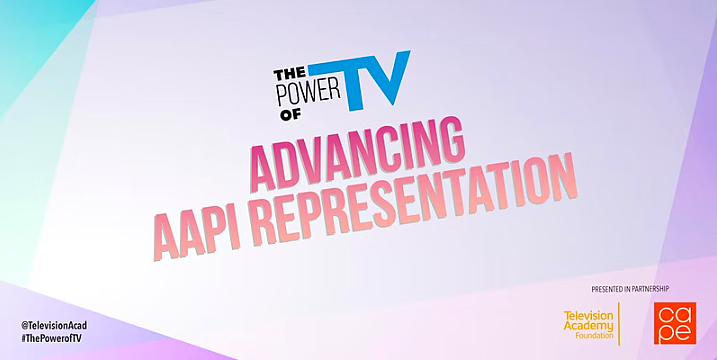 According to a 2021 Pew Research Center report, the Asian population in the U.S. nearly doubled between 2000 and 2019 and is projected to surpass 46 million by 2060, making it the fastest-growing racial or ethnic group in the U.S. Yet a significant representation gap both on screen and behind the screen exists. Moreover, programming continues to fall short of portraying the AAPI communities in a broad and inclusive manner. Most portrayals fall into the categories of silenced, stereotyped, tokenized, isolated and sidekicks/villains, according to a 2021 USC Annenberg Inclusion Initiative report.

Developed in partnership with CAPE, The Power of TV - Advancing AAPI Representation will assemble AAPI industry leaders who are driving inclusion in television, discuss their career paths to success, challenges faced when advocating for inclusivity, and explore what it takes to achieve greater equity in the television industry.

This is a public event and Television Academy members as well as the public are invited to attend virtually.

About CAPE
CAPE is the premier non-profit organization creating opportunities and driving change for Asian and Pacific Islander (API) success in Hollywood. CAPE works to shift culture through storytelling to create a better world. For over 30 years, we have fought for API representation in film and television, because what we watch on our screens should reflect the world in which we live and project a better one. CAPE advances representation for APIs in Hollywood through three main verticals: (1) nurturing and engaging creative talent and executive leadership; (2) providing cultural script consulting and talent referrals; and (3) championing projects for critical box office and streaming success. Follow @capeusa on Instagram and Twitter or visit our website at capeusa.org.