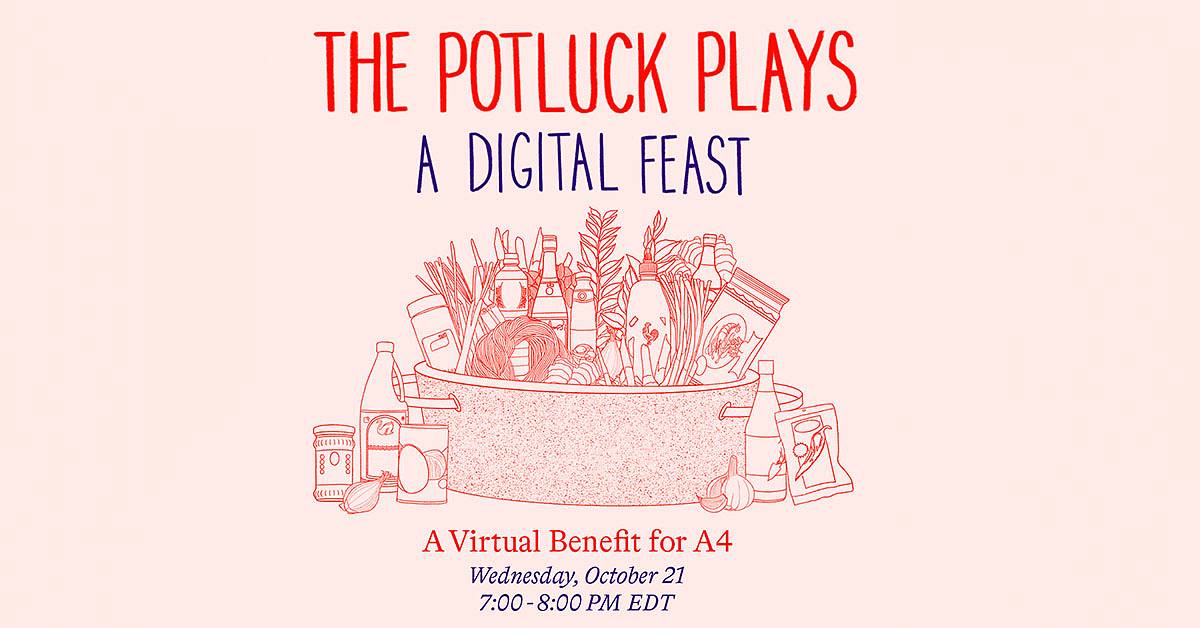 The Potluck Plays: A Digital Feast

Join A4 for our first virtual benefit performance!

We’re thrilled to invite you to participate in our first virtual benefit performance! We have commissioned A4’s 2020 Van Lier Fellow, Miranda Cornell, and 2016 Van Lier fellow, Seonjae Kim, to create a one-time only, interactive series of plays centered around food and community. And this year, we are excited to honor bestselling author Jenny Han (To All the Boys I’ve Loved Before) as our A4 Inspiration Icon.

Buy a ticket at $100 or more to receive special access to the event through Zoom, which will allow you to interact with the performers, decide what happens next, participate in a post-event Q&A, as well as receive a cookbook ‘zine illustrated by Felicia Liang and other special gifts!

Just want to watch without interacting? The event will also be livestreamed for free on Facebook.

$250 - VIP ticket: Receive all of the above, as well as a signed book by author Jenny Han, $30 gift certificate from Bessou, and a signed, limited-edition print (suitable for framing) by artist Felicia Liang

For additional information or to become a sponsor, please contact Anjali Goyal, Development Manager, at agoyal@aaartsalliance.org.

Your contribution will support A4’s programs, which seek to ensure greater representation, equity, and opportunities for Asian American artists and arts organizations.

The Asian American Arts Alliance is a 501©(3) non-profit organization. Your contribution is tax-deductible to the extent allowed by US law.

Seonjae Kim is an NYC based director and writer from Seoul, South Korea who received her BA at Northwestern University. She is the creator and director of Riot Antigone, an original Riot Grrrl musical adaptation of Sophocles’ tragedy that premiered at La MaMa Experimental Theatre Club in 2017. It will be published in a Routledge anthology of Greek adaptations as well as be released as an independent record later this year. Her work has been seen at Princeton University, Atlantic Theatre Company, Joe’s Pub, Playwrights’ Realm, the Bushwick Starr, Dixon Place, Williamstown, PEN/World Voices Festival, Rattlestick Theatre Company, Theatre Mu, the New Ohio, the New Group, Bryn Mawr College, and University of the Arts among other places. She is the Associate director of the Broadway bound musical KPOP. jae-k.com

Felicia Liang is an artist whose works celebrate identity and visual storytelling. She specializes in colored pencil and digital illustrations and weaves community building and activism into her works. Her clients include Noma, Harvard, Jing Fong, Pearl River Mart, and Atlas Obscura and her art has been featured in Artsy and Gothamist. Her portfolio can be found on felicia-liang.com.

A4’s 2020 Jadin Wong Fellow, Rohan Bhargava was born and raised in New Delhi, India where he trained at the Danceworx Academy of Performing Arts before relocating to New York City in 2012, where he earned a BFA in Dance from Tisch School of the Arts, NYU. In June 2015, Rohan founded Rovaco Dance Company, with which he has showcased work at reputed venues such as Ailey Citigroup Theater (New York), Gaertner Center for Performing Arts (Texas), DeBaun Performing Arts Center (New Jersey), Truro Center for the Arts (Massachusetts), Brattleboro School of Dance (Vermont), and The Southern Theater (Minnesota). Rovaco repertory has won “Outstanding Choreography” at Tamasha NYC, and the company has been commissioned by Mare Nostrum Elements, Rhythmically Speaking Dance, the Dance Gallery Festival, and the Alsop Entrepreneurship Award, which paired the company with composition students at Mannes School of Music. Additionally, Rohan has been a resident artist for the James Jay Dudley Luce Foundation, Dancewave, Sam Houston State University, and the CUNY Dance Initiative at LaGuardia Performing Arts Center. He currently works for Greater Ridgewood Youth Council, Kizuna Dance, Notes in Motion Outreach Dance Theater, and Peter and Co. rovacodance.com

A4’s Inspiration Icon, Jenny Han is the #1 New York Times bestselling author of the To All the Boys I’ve Loved Before series. She is an executive producer on all three Netflix films—To All the Boys I’ve Loved Before, To All the Boys: P.S. I Still Love You, and To All the Boys: Always and Forever, Lara Jean. She is also the author of the New York Times bestselling Summer I Turned Pretty series. Her books have been published in more than thirty languages. A former librarian, Jenny earned her MFA in creative writing at the New School. She lives in Brooklyn, New York. jennyhan.com

Purva Bedi is an actress and playwright. She is the co-creator of the comedy series Shrinkage, which is now streaming on Amazon Prime. Her extensive theater credits include Dance Nation, for which she was honored with a 2019 Drama Desk Award, Wives at Playwrights Horizons, Passage with Soho Rep, India Pale Ale at the Manhattan Theater Club, An Ordinary Muslim with New York Theatre Workshop, and many more. Bedi is an Associate Artist of Target Margin Theater and member of the Actors Center Workshop Company. Her film and television appearances include roles on Billions, High Maintenance, She’s Gotta Have It, Madam Secretary, Nurse Jackie, The Blacklist, The Assistant, The Surrogate, Sully, Americanish, Once Upon a Time in Brooklyn, and American Desi. Upcoming projects include writing two plays in development, Gorgeous Nothings with Dorset Theatre Festival and Dolly’s Dream Bimari. purvabedi.com

Amy Hill’s television and film credits number over 168. She is recurring on Crazy Ex-Girlfriend, UnReal, Preacher, and MOM. She’s a regular on Amazon Prime’s Just Add Magic. As a voice actor, credits include American Dad, Lilo and Stitch, King of the Hill, and HBO’s Happily Ever After. She started her career in theater working with the famed Asian American Theater Company in San Francisco and continued as a teacher, director, and artistic committee member there in addition to being a part of SF’s improvisation and sketch comedy scene. Hill has written and performed a number of one-woman shows, including the trilogy of Tokyo Bound, Reunion, and Beside Myself. She’s worked with regional theaters such as the Mark Taper Forum, Berkeley Rep, Seattle Rep, Actors Theater of Louisville, the Public Theater in NYC, and appeared on Broadway in Lincoln Center’s Twelfth Night that also aired on PBS’ Live from Lincoln Center. She is proud to consider East West Players as her LA Theater “home” where she has also performed, directed, and taught. amyhillactor.com

Maekalah Ratsabout is a stage actress based in the Twin Cities. She has appeared in Cinderella (Children’s Theatre Company), Hot Asian Doctor Husband (Theater Mu), and Joseph and the Amazing Technicolor Dreamcoat (East Ridge High School). Maekalah is in eighth grade and enjoys singing, acting, and writing. She is passionate about supporting other young actors pursuing theater arts and she’s excited to join and learn from veteran Asian American actors and artists.

Jason Tam was last seen on TV in NBC’s hit Jesus Christ Superstar: Live in Concert as Peter. Most recently, he was in the Broadway cult hit Be More Chill and Off-Broadway in the immersive show KPOP, for which he won the Lortel Award. Jason’s Broadway credits include IF/THEN, Lysistrata Jones, and the original Paul in the revival of A Chorus Line. He has also been part of numerous Off-Broadway and regional theater productions. Jason has been a regular on One Life to Live and Beyond the Break and can be seen in the documentary Every Little Step.