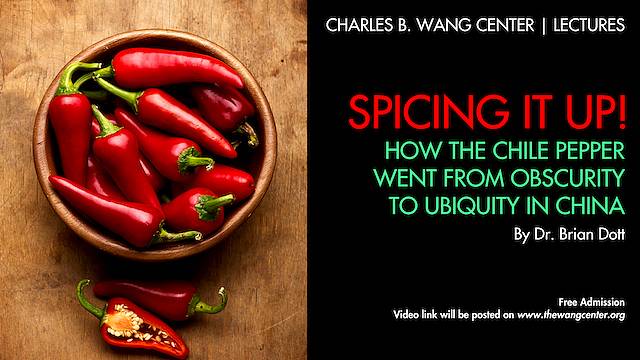 Spicing It Up! How the Chile Pepper Went from Obscurity to Ubiquity in China

It’s hard to imagine Chinese cuisine without the chile pepper. Yet there weren’t any chiles at all in China before the 1570s. Introduced from the Americas, chile peppers initially struggled to gain a foothold in China. Now they are so common that many Chinese assume that they are native. Brian Dott will discuss how the chile pepper arrived in China and how this drastic transition—from obscurity to ubiquity—took place. Part of the chile’s success in China is due to its versatility, and it eventually was integrated into traditional Chinese medicine, garden aesthetics, and literature in addition to cuisine. This incredible versatility also allowed for different regions to emphasize or deemphasize its different aspects, leading to an impressive diversity of cuisines and combinations. The humble chile has come to influence many aspects of Chinese culture, even changing the meaning of the Chinese word spicy ( la).

ABOUT THE SPEAKER
Brian Dott is professor of history at Whitman College. His specialties include ancient and modern East Asia, especially China, as well as religion and gender studies. His book Identity Reflections: Pilgrimages to Mount Tai in Late Imperial China (2004) details pilgrimages to that sacred mountain located in the Shandong peninsula. His most recent book, The Chile Pepper in China: A Cultural Biography (2020), studies how the Chinese integrated the chile pepper into their cuisine, medicine, and imagery.