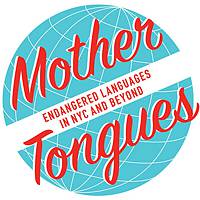 Endangered Languages in NYC and Beyond

Linguists estimate that half of the world’s languages will disappear this century. NYC is a living language lab where there are more spoken and endangered languages than anywhere else in the world. New York City is home to over 700 languages, and many of these are in danger of being lost. Mother Tongues is a call to action to preserve NYC’s linguistic diversity ranging from endangered languages to the NYC accent!

Please join us for the opening reception to hear, experience, and interact with these languages!

A recitation by Papa Susso, one of Africa’s great griots. A griot is the keeper of oral traditions in West African cultures, performing musical poems.

Mother Tongues offers audiences a unique opportunity to meet and learn about New York City’s remarkably diverse linguistic communities. Here visitors can engage with the Language Laboratory and Meet a Speaker-interactive mixed media booths that showcase individual speakers of endangered languages in the city. You will learn, for instance, that the word wanishi means thank you in the language of the Lenape, New York’s native people. Visitors can play games to learn the structure of certain endangered languages, visualize the language connections between New York City and the world, and add lines to the Khonsay, a multi-lingual poem.

Mother Tongues is sponsored by City Lore, Bowery Arts + Science, and the Endangered Language Alliance. Funded by the National Endowment for the Arts, the New York State Council on the Arts, and the New York City Department of Cultural Affairs.

We look forward to seeing you here!