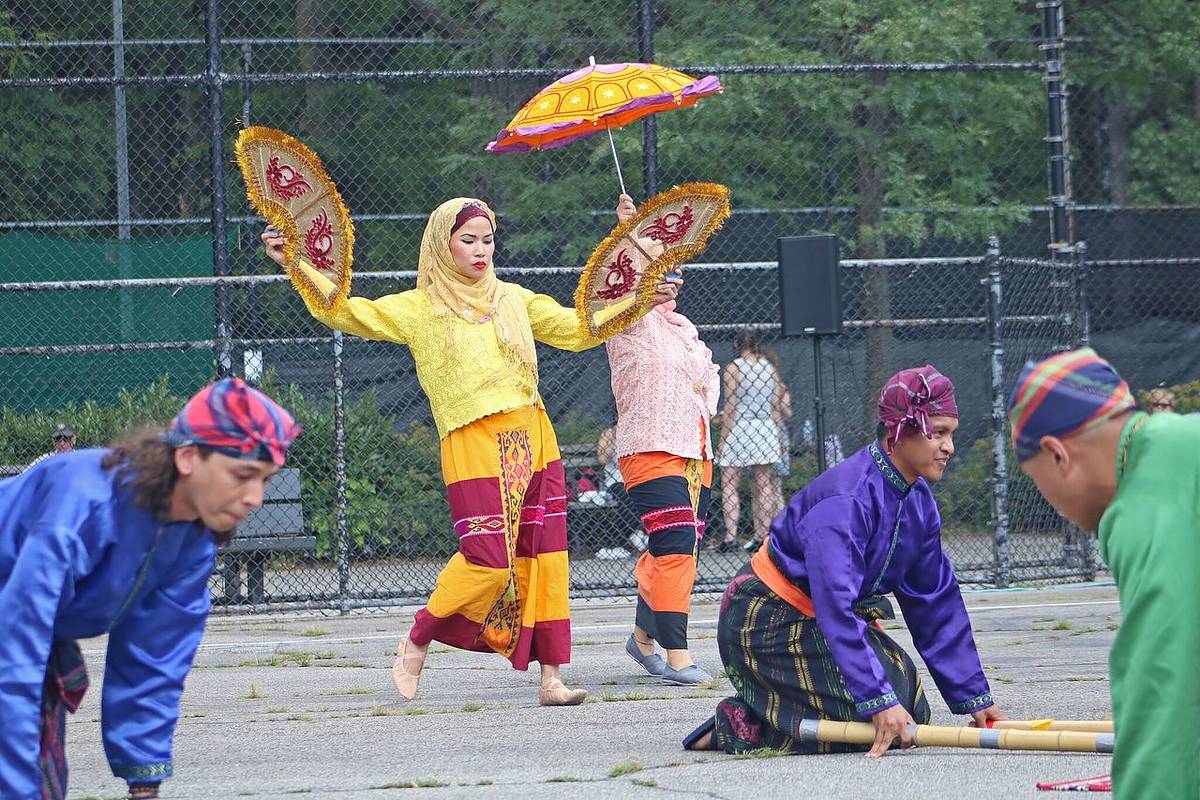 Potri Ranka Manis, the Founder and Artistic Director of Kinding Sindaw, will also lead a Filipino Indigenous Dance Workshop for La MaMa Kids on Saturday, March 14, 2020 at 11am at La MaMa’s Ellen Stewart Theatre, 66 East 4th Street (2nd Floor). Tickets are $10 for kids and free for adult chaperones, and can be purchased online at www.lamama.org/pananadem, by phone at 212-352-3101, or in person at the La MaMa Box Office one hour prior to the event, 66 East 4th Street, NYC.

Pananadem (Remembering)
Conceived & Directed by Potri Ranka Manis
March 12 - 15, 2020
Pananadem means “remembering” in the language of the Meranao people.  It is a way of looking back across time, to gain inspiration and perspective from one’s ancestors. In this tale, old and new align as a young group of refugees whose quest for inspiration leads them to a transformative encounter with displaced tradition-bearers who recall the legends of Derangen, the Meranao epic.

La MaMa Kids: Filipino Indigenous Dance Workshop
Saturday, March 14, 2020 at 11am
Learn and enjoy the Kulintang gong music, Sultanate court dance movements from the epic, legends and myths of the ancestral Philippine Melayu Nusantara heritage. This workshop will transport the participants to experience these epic stories through hand gestures, footwork and colorful scarves and fans together with musical instruments: talking gongs (Gandingan) drum (dabakan) and the mini kulintang called sarunay.

Potri Ranka Manis was born in Borocot, Maging in Mindanao, Philippines. The oral culture and tradition of legends, epics and myths that are told through dances, traditional chant called Bayok and extemporaneous vivid poetry called Kaparoonan of the Meranao. This was her everyday life as a child in Mindanao. The tribes interchange resources and barter in Mindanao.  This barter not only includes goods, but also culture, where welcome rituals, food rituals and healing rituals are being shared. Dances and music is always the culmination of these cultural exchange events. She learned not only the beauty and the art but the harmony, but also sharing the values carried through generations by chants, dances, kulintang music and weaving.

She grew up in a remote village, one of the ancient sultanates from the 4th century, when the Philippines, as a state, did not yet exist. Storytelling that is danced and chanted are everyday entertainment during Potri’s childhood. This is how she learned artforms, orally transmitted folk traditions. Examples of these include the malong, tubular, handwoven apparel worn, with designs individually made according to the stories of the wearer or the weaver.  Another example are musical pieces on the kulintang.  Kulintang are made of 8 graduated gongs and are played together with other bigger gongs called agong and gandingan.The gandingan is the talking gong, used to send messages from one village to the next.

Her expertise in T'Boli came from her time of living among them for six years as a Registered Nurse, to advance community healthwork in the area.   In her time there, she learned from tradition-bearers among the T'Boli, including their rituals, weaving, epic, dance, and music.

Her learning process of these dances are through life cycle from birthing, wedding, healing, and dying.  Her learning process of this artform also include responses to the lunar and solar eclipse, rain, planting season and hunting season. She developed the oral tradition technique in teaching students who grow up and are educated in the western discipline.  She brings in her students into the realms of the story, into the character and themes. The dances are taught nurturing the learner to put oneself in the story so they will not just copy the movement but be the character themself in the story. It is also emphasized every beginning of the classes or rehearsals or performances that the dance is in honor of the ancestors by reciting a salutation: “In honor of our ancestors who created and transmitted this tradition to us. With open heart, mind, body and soul, we would like to take this in as we use it to empower us to walk our path.”

The dance movements are named after the patterns of the natural environment. An example is the foot movement of the Tboli called hugging the earth, asking permission from the earth to allow the dance ritual to take place. The kuda stance is also taught as the learner becomes the horse. The madal tanum is a rice planting ritual, where dancers mimic planting. It is a reminder that rice is sacred and can only be made by a whole community. The dainty, firm but graceful movements imitates the waves of the ocean and the serenity of the lake. The flying movement of the Imuhen bird (bird of omen) is signified in raising and falling of the hands that is sometimes accentuated by the handwoven malong.

Overall the dances that she teaches is not to entertain but to advocate for the intentions of these dances and also an awakening call for the western dancers that there is that living tradition that is threatened by the encroachment of the corporate development that rob the indigenous of their land. She believes that in teaching and performing these dances, music and chants, the call for awareness of the existence and endangerment of the indigenous people who are the guardian of our environment, our forest and natural resources will be more emphasized and will call more involvement by the audiences that are reached by this traditional art.

La MaMa is dedicated to the artist and all aspects of the theatre. La MaMa’s 58th Season celebrates the centennial of its founder, Ellen Stewart, whose vision of nurturing new artists and new work remains as strong today as it was when she first opened the doors in 1961. La MaMa has presented more than 5,000 productions by 150,000 artists of all nations, cultures, races and identities. Cultural pluralism and ethnic diversity are inherent in the work created on our stages. Here, artists find a supportive environment for artistic exploration, and audiences are part of the development of an artist’s work over time.