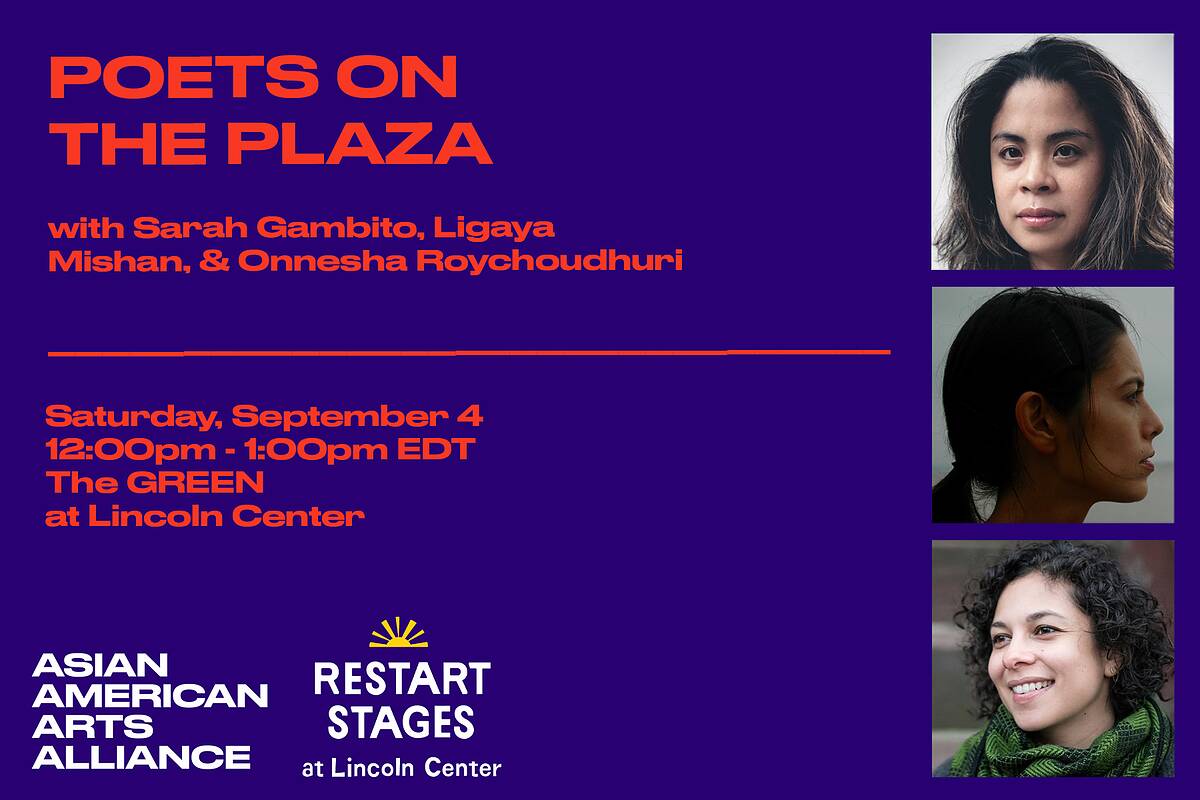 Poets on the Plaza

Join the Asian American Arts Alliance (A4) for Poets on the Plaza as we present three influential AAPI voices–poet Sarah Gambito, The New York Times essayist Ligaya Mishan, and writer and The Moth storyteller, Onnesha Roychoudhuri–who will share personal stories of ancestry, love, and resilience and the memories that drive us as we confront current issues of climate change, immigration, and representation.

This series is s a pop-up event on The GREEN (in front of the Lincoln Center fountain).

No RSVP is required.

SARAH GAMBITO
Sarah Gambito is the author of the poetry collections Loves You (Persea Books), Delivered (Persea Books) and Matadora (Alice James Books). Her poems have appeared or are forthcoming in The Iowa Review, POETRY, Harvard Review, American Poetry Review, The New Republic, and other journals. She holds degrees from The University of Virginia and The Literary Arts Program at Brown University. Her honors include the Barnes & Noble Writers for Writers Award from Poets and Writers, The Wai Look Award for Outstanding Service to the Arts from the Asian American Arts Alliance, and grants and fellowships from the National Endowment for the Arts, the New York Foundation for the Arts and the MacDowell Colony. She is Associate Professor of English / Director of Creative Writing at Fordham University and co-founder of Kundiman, a non-profit organization serving writers and readers of Asian American literature.

LIGAYA MISHAN
Ligaya Mishan writes for the New York Times and T magazine. She has been a finalist for the ASME National Magazine Awards, the James Beard Media Awards, and the IACP Food Writing Awards. Her essays have been selected for the Best American anthologies in Magazine, Food, and Travel Writing, and her criticism has appeared in the New York Review of Books and The New Yorker. In 2019, she was named the Mary Higgins Clark Chair in Creative Writing at Fordham University. The daughter of a Filipino mother and a British father, she grew up in Honolulu, Hawai’i.

ONNESHA ROYCHOUDHURI
Onnesha Roychoudhuri is a writer and storyteller. She regularly leads writing and storytelling workshops for organizations and universities across the country, including the Moth and Doctors Without Borders, as well as Rutgers University, Hunter College, and Western Connecticut State University, where she is an instructor in the graduate writing program. She is the author of The Marginalized Majority: Claiming Our Power in a Post-Truth America, named one of the best books of 2018 by Kirkus Reviews.