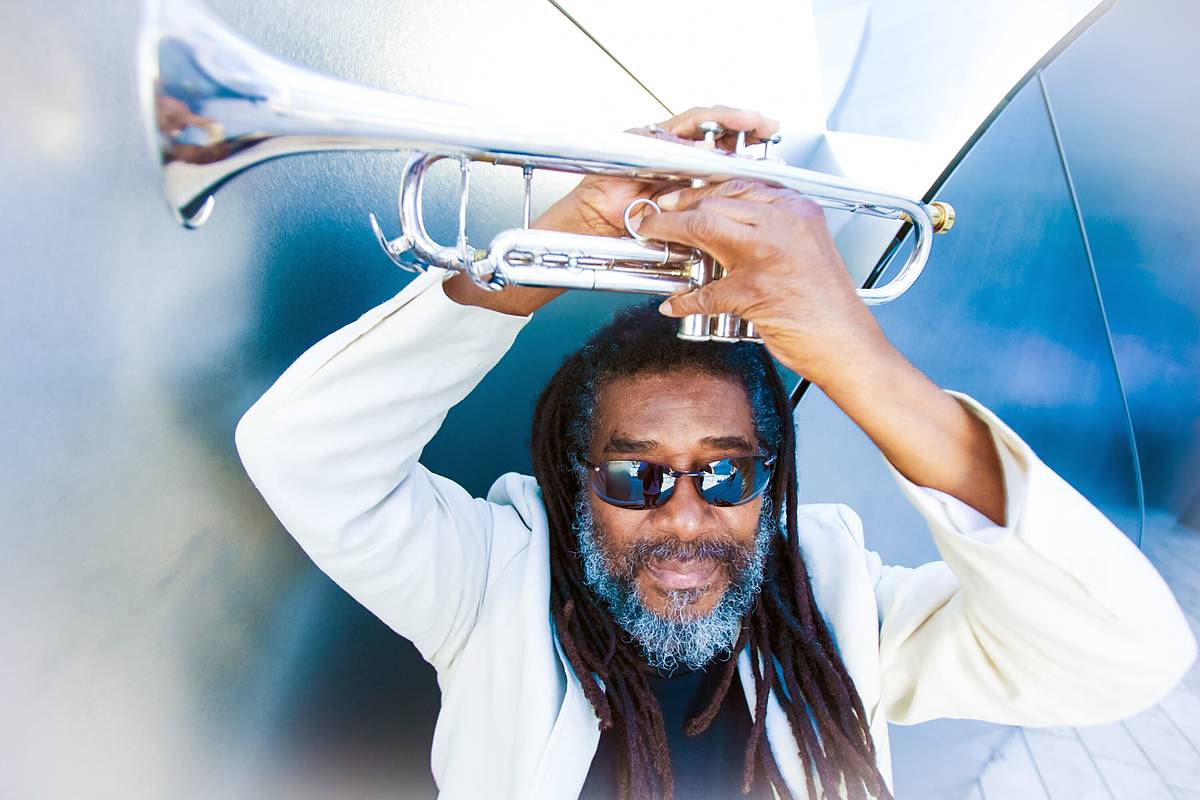 Friday, April 17, 2020
8 – 10PM
Baruch Performing Arts Center continues its Milt Hinton Jazz Perspectives Concert Series with pianist Vijay Iyer and trumpeter Wadada Leo Smith performing selections from their 2016 album A Cosmic Rhythm With Each Stroke on April 17, 2020 at 8PM. The concert will be held at Baruch Performing Arts Center, 55 Lexington Avenue (25th Street between Third and Lexington Avenues), NYC. Tickets are $16-$51 and can be purchased online at https://ci.ovationtix.com/1091/production/1014634?performanceId=10437252.

Released in March 2016 on ECM records, A Cosmic Rhythm With Each Strokefeatures Vijay Iyer and his “hero, friend and teacher,” Wadada Leo Smith. Iyer had previously played extensively with Smith in the trumpeter’s Golden Quartet. A particularly inspiring collaboration at New York’s The Stone early in 2015 underlined the affinity of the two musicians’ sounds and concepts and made the documentation of the duo a priority. The resulting album was produced by Manfred Eicher at New York’s Avatar Studios in October 2015, capturing the improvisational magic of the duo, the expressive individuality of the participants and the ways in which they can-as Wadada Leo Smith says-“merge as a single wave, or a single voice.”

The album received acclaim from fans and critics alike. Writer Alec Wilkinson of The New Yorker called it “a two-figure play in which the exchanges involve mortality or impermanence or divinity. The musicians seem to trade remarks and sometimes talk with one another…The discourses are both cultivated and passionate.” For their collaboration on A Cosmic Rhythm With Each Stroke, Vijay Iyer and Wadada Leo Smith were named Duo of the Year in 2017 by The Jazz Journalists Association.

About the Artists
Grammy-nominated composer-pianist Vijay Iyer was described by Pitchforkas “one of the most interesting and vital young pianists in jazz today,” by the Los Angeles Weekly as “a boundless and deeply important young star,” and by Minnesota Public Radio as “an American treasure.” He has been voted DownBeat Magazine's Artist of the Year four times-in 2018, 2016, 2015 and 2012-and Artist of the Year in Jazz Times’ Critics’ Poll and Readers’ Poll for 2017. Iyer was named Downbeat’s 2014 Pianist of the Year, a 2013 MacArthur Fellow, and a 2012 Doris Duke Performing Artist. In 2014 he began a permanent appointment as the Franklin D. and Florence Rosenblatt Professor of the Arts at Harvard University, with joint affiliations in the Department of Music and the Department of African and African American Studies.

The New York Times observed, “There’s probably no frame wide enough to encompass the creative output of the pianist Vijay Iyer.” Iyer has released twenty-three albums covering remarkably diverse terrain, most recently for the ECM label. 2019 saw the release of The Transitory Poems, a live two-piano improvisation with Iyer’s longtime colleague and label-mate, Craig Taborn. Prior to that, Iyer’s sextet album Far From Over (2017) was ranked #1 in US National Public Radio’s annual Jazz Critics’ Poll, surveying 157 critics. It was named among the best jazz albums of the year in the Los Angeles Times, Chicago Tribune, Boston Globe, Slate, and The New York Times, and the only “jazz release” in Rolling Stone’s list of the 50 best records of 2017. Iyer’s Sextet was voted 2018 Jazz Group of the Year by the Jazz Journalists Association.

Iyer’s previous ECM releases include A Cosmic Rhythm With Each Stroke(2016) with Wadada Leo Smith; Break Stuff (2015), with a coveted five-star rating in DownBeat Magazine, featuring the Vijay Iyer Trio, hailed by PopMatters as “the best band in jazz”; Mutations (2014), featuring Iyer’s music for piano, string quartet and electronics, which “extends and deepens his range… showing a delicate, shimmering, translucent side of his playing” (Chicago Tribune); and Radhe Radhe: Rites of Holi (2014), “his most challenging and impressive work, the scintillating score to a compelling film by Prashant Bhargava” (DownBeat), performed by the International Contemporary Ensemble.

Iyer’s trio made its name with three tremendously acclaimed and influential albums: Break Stuff (2015), Accelerando (2012) and Historicity (2009).  Accelerando was voted #1 Jazz Album of the Year for 2012 in three separate critics polls surveying hundreds of critics worldwide, hosted by DownBeat, Jazz Times, and Rhapsody, respectively, and also was chosen as jazz album of the year by NPR, the Los Angeles Times, PopMatters, and Amazon.com. The Vijay Iyer Trio was named 2015 Jazz Group of the year in the DownBeat International Critics Poll, with Iyer having earlier received an unprecedented “quintuple crown” in the 2012 Downbeat Poll (winning Jazz Artist of the Year, Pianist of the Year, Jazz Album of the Year, Jazz Group of the Year, and Rising Star Composer categories), as well as a “quadruple crown” in the JazzTimes extended critics poll (winning Artist of the Year, Acoustic/Mainstream Group of the Year, Pianist of the Year, and Album of the Year). Iyer received the 2012 and 2013 Pianist of the Year Awards and the 2010 Musician of the Year Award from the Jazz Journalists Association, and the 2013 ECHO Award (the “German Grammy”) for best international pianist.  Historicity was a 2010 Grammy Nominee for Best Instrumental Jazz Album, and was named the #1 Jazz Album of 2009 in The New York Times, The Los Angeles Times, the Chicago Tribune, the Detroit Metro Times, National Public Radio, PopMatters.com, the Village Voice Jazz Critics Poll, and the Downbeat International Critics Poll, and the trio won the 2010 ECHO Award for best international ensemble.

Iyer’s 2013 collaboration with poet Mike Ladd, Holding It Down: The Veterans’ Dreams Project, was hailed as #1 Jazz Album of the Year by the Los Angeles Times. Along with their previous projects In What Language? (2004) and Still Life with Commentator (2007), Holding It Down rounded out a trilogy of politically searing albums about post-9/11 American life.

Iyer is the Artistic Director of The Banff Centre’s International Workshop in Jazz and Creative Music, the 2015-16 Artist-in-Residence at the Metropolitan Museum of Art, and Musical Director for the 2017 Ojai Festival. He holds a doctorate in music cognition from University of California, Berkeley, and his writings have appeared in Journal of Consciousness Studies, Wire, Music Perception, JazzTimes, Journal of the Society for American Music, Critical Studies in Improvisation, and The Oxford Handbook of Critical Improvisation Studies. He is a Steinway artist. https://vijay-iyer.com.

Trumpeter, multi-instrumentalist, composer, and improviser Wadada Leo Smith is one of the most boldly original and influential artists of his time. Transcending the bounds of genre or idiom, he distinctly defines his music, tirelessly inventive in both sound and approach, as “Creative Music.”

For the last five decades, Smith has been a member of the legendary AACM collective, pivotal in its wide-open perspectives on music and art in general. He has carried those all-embracing concepts into his own work, expanding upon them in myriad ways.

Throughout his career, Smith has been recognized for his groundbreaking work. A finalist for the 2013 Pulitzer Prize in Music, he received the 2016 Doris Duke Artist Award and earned an honorary doctorate from CalArts, where he was also celebrated as Faculty Emeritus. In addition, he received the Hammer Museum’s 2016 Mohn Award for Career Achievement “honoring brilliance and resilience.” In 2018 he received the Religion and The Arts Award from the American Academy of Religion. In November 2019, he received the UCLA Medal, the university’s highest honor, during a ceremony and concert at UCLA’s Herb Alpert School of Music.

In October 2015 The Renaissance Society at the University of Chicago presented the first comprehensive exhibition of Smith’s Ankhrasmation scores, which use non-standard visual directions, making them works of art in themselves as well as igniting creative sparks in the musicians who perform them. In 2016, these scores were also featured in exhibitions at the Hammer Museum, the Kalamazoo Institute of Arts, and Kadist in San Francisco.

Born December 18, 1941 in Leland, Mississippi, Smith’s early musical life began at age thirteen when he became involved with the Delta blues and jazz traditions performing with his stepfather, bluesman Alex Wallace. He received his formal musical education from the U.S. Military band program (1963), the Sherwood School of Music (1967-69), and Wesleyan University (1975-76).

Smith has released more than 50 albums as a leader on labels including ECM, Moers, Black Saint, Tzadik, Pi Recordings, TUM, Leo and Cuneiform. His diverse discography reveals a recorded history centered around important issues that have impacted his world, exploring the social, natural and political environment of his times with passion and fierce intelligence. Rosa Parks: Pure Love, an Oratorio of Seven Songs was released on February 15, 2019 via TUM Records. His 2016 recording, America’s National Parks earned a place on numerous best of the year lists including The New York Times, NPR Music and many others. Smith’s landmark 2012 civil rights opus Ten Freedom Summers was called “a staggering achievement [that] merits comparison to Coltrane's A Love Supreme in sobriety and reach." www.wadadaleosmith.com

Baruch Performing Arts Center is an acclaimed performing arts presence. Located in the heart of Manhattan just east of Chelsea and the famed flatiron building, BPAC presents renowned classical music, opera, jazz, theater, dance, discussion, film, and innovative cross-genre programming. BPAC has presented over 1,000 cultural programs in its 5 spaces since 2003. Its curated season of 30 programs annually emphasizes new work experienced in intimate settings, the diversity of American culture as exemplified by Baruch students (who come from 130 different countries) and work that lives at the confluence of art and social justice.