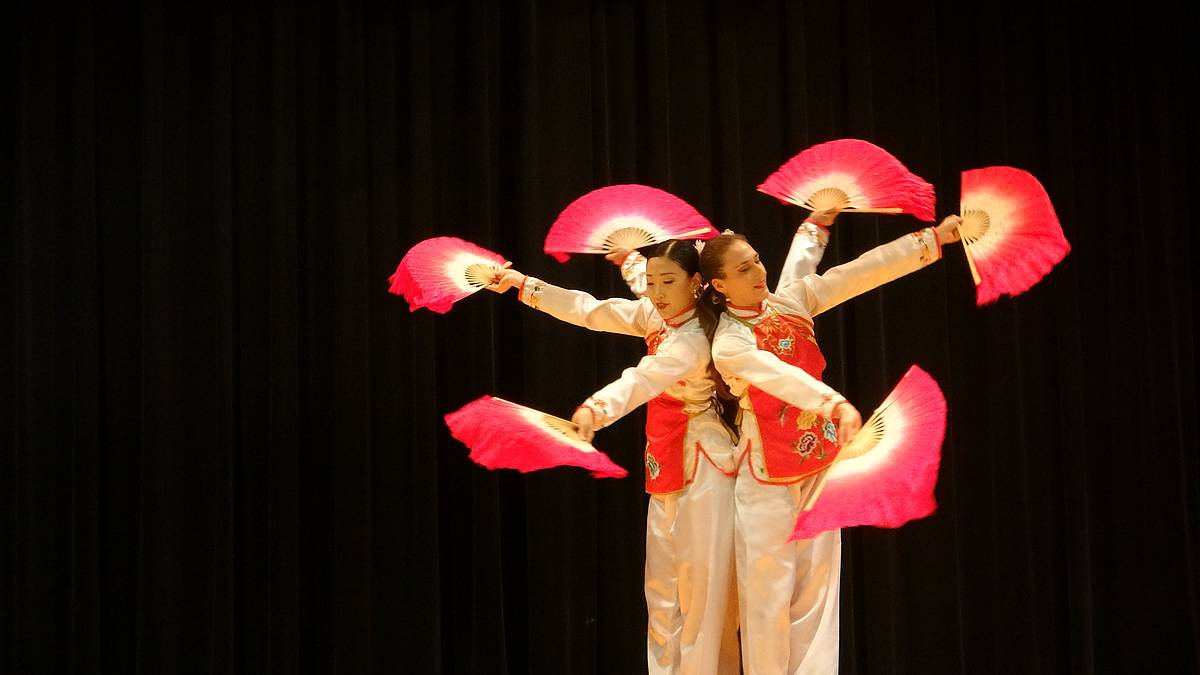 Nai-Ni Chen Dance Company will present three dances that chronicled Nai-Ni Chen’s choreographic history and personal journey as an immigrant.  The Company will show a range of works that take inspiration from nature to telling a story that pays tribute to the contribution of Asian American who came to build the Continental Railroad that connected the eastern United States with the west.   The Company will begin with Raindrops, a meditation on the childhood memory of the choreographer before she came to America, Way of Five - Fire explores the element Fire in the context of the five elemental energies in the cycle of nature which manifests in all aspects of life, including the inner fire that enable us to move forward with confidence and faith. The new dance, Ten Miles A Day chronicles a record-breaking day for Chinese immigrants laying tracks for the transcontinental railroad.

Nai-Ni Chen Dance Company, New Jersey Tap Ensemble and Umoja Dance Company join forces to bring the excitement of three different styles of dance to the SOPAC stage. One incredible evening features performances inspired by the art of Chinese writing, the joy and infectious spirit of the uniquely American art form called tap and a multi-cultural company of dancers that serve as a vehicle to educate, preserve and present dance as a communal and spiritual expression of life. Join us for a magical night to celebrate the beauty, inspiration and elegance of dance.

About the Nai-Ni Chen Dance Company
Bringing the dynamic freedom of American modern dance together with the elegant splendor of Asian art, the Nai-Ni Chen Dance Company is one of the most visible Asian American dance companies in America.  Ms. Chen’s unique choreography transports audiences beyond cultural boundaries to the common ground between tradition and innovation, rising beyond form into the spirit.

One of the few Asian American professional dance companies with an extensive season of touring and performing around the world, Nai-Ni Chen has also developed Arts in Education residency programs in school districts to bring culture and arts into educational settings.  Its colorful and engaging programs and workshops have reached over one million young audience members in the NY/NJ area. The Company is currently in residence at New Jersey City University and has been a Principal Affiliate of the New Jersey Performing Arts Center since its inception.

The Nai-Ni Chen Dance Company has the honor of having received more than fifteen awards from the National Endowment for the Arts and numerous Citations of Excellence and grants from the New Jersey State Council on the Arts, Department of State, a Partner Agency of the National Endowment for the Arts, the New Jersey Cultural Trust, the New York State Council on the Arts with the support of Governor Andrew M. Cuomo and the New York State Legislature.  Additional funding for the company have come from: the Geraldine R. Dodge Foundation, DanceNYC Dance Advancement Fund, the Hyde and Watson Foundation, E.J. Grassman Trust, The Horizon Foundation for New Jersey, New Music USA, the Blanche and Irving Laurie Foundation, American Dance Abroad, the Association of Performing Arts Presenters’ Cultural Exchange Fund, supported by the Andrew W. Mellon Foundation, PSEG, Proskauer, WAC Lighting and the Glow Foundation.

Nai-Ni Chen, Choreographer/Artistic Director of the Nai-Ni Chen Dance Company
Nai-Ni Chen is one of the few professional touring Asian American dance companies that is led by a woman in the United States. Since the inception of her Company in 1988, Ms. Chen has created a wide-ranging repertory, from dances that originated thousands of years ago to highly abstract, modern works which were presented in numerous theaters throughout 41 states in the United States and in Europe, Asia and the Americas.

Coming from a rich dance tradition, Nai-Ni Chen was a renowned traditional dancer in Taiwan and served on several ambassadorial culture missions to nineteen countries around the world. An early member of the Cloud Gate Dance Theater in Taiwan, she came to America to seek her own voice in the world of contemporary dance in 1982. Winning critical acclaim worldwide, Ms. Chen has received Choreographer’s Fellowship from the National Endowment for the Arts and from New Jersey State Council on the Arts. Her work has been commissioned by the Joyce Theater Foundation, the New Jersey Performing Art Center, the Lincoln Center Institute, the Geraldine R. Dodge Foundation, Dancing in the Streets and the Mid Atlantic Arts Foundation. She has taught master classes and set her choreography at colleges and universities throughout the United States such as Ailey School, Case Western Reserve and Long Island University. She has been a principal affiliate artist of the New Jersey Performing Arts Center since its inception. On television, Ms. Chen is an often-featured artist on Sino Vision and PBS’s “State of the Arts.” For her contribution to the community, she has won numerous awards as “Culture Ambassador” from OCA, NJ Chinese American Chamber of Commerce and others.

New Jersey Tap Ensemble
New Jersey Tap Ensemble (NJTAP) is a professional touring dance company founded in 1994 by professional tap dancer Deborah Mitchell with a mission to preserve and celebrate the American art form of rhythm tap dancing. Based in Bloomfield, New Jersey, the company has developed some of today’s most notable tap dancers that have appeared on Broadway, in film and television. The Company’s presentation called “It’s About Time” gives the audience a glimpse of the tap dancers’ broad range of expression from the simplistic to sophisticated and intricate patterns of rhythm that are rooted in the art forms most basic and fundamental concept of keeping time.

Deborah Mitchell, Founder/Artistic Director of New Jersey Tap Ensemble
Deborah Mitchell celebrates 25 years as Founder and Artistic Director of New Jersey Tap Ensemble. Ms. Mitchell has a rich, extensive background and career with the art form of tap dancing.  As protégé of Leslie “Bubba” Gaines of the Copasetics, this award-winning tap professionals’ credits include The Cotton Club (Motion Picture), Tony-Award Winning Broadway Production of Black and Blue, PBS Great Performances and international tours with the legendary Cab Calloway performing with Germaine Goodson as The Rhythm Queens. She is one of the subjects of Tap-Dancing America by Constance Valis Hill and the documentary Gotta Move, Women in Tap by Lynn Daly. Under her direction, NJTAP Dance Ensemble has receive both 2018 and 2019 Jersey Arts People’s Choice Award Favorite Modern /Cultural Dance Company, and the Company has been a recipient of the New Jersey State Council on the Arts
Citation of Excellence.

Umoja Dance Company
Umoja Dance Company was established in 1993 by Karen L. Love. It is a New Jersey based multi-cultural company of dancers and serves as a vehicle to educate, preserve and present dance as a communal and spiritual expression of life. Umoja, the Kiswahili word for “Unity”, creates a nurturing environment that encourages cross-cultural exchange and celebrates the human spirit. Through ongoing research, the company continues to adapt aspects of African culture, aesthetics and values that are paramount to the work. In December 2012, the Umoja Dance Studio opened its doors in Vauxhall, New Jersey. The Studio offers classes, residencies, open workshops, master classes, lecture demonstrations as well as outdoor performances and is an integral part of the community. During this performance, Umoja Dance Company will present a fusion of West African dance and contemporary modern that reflects the evolution of movement and spirit. Our dances celebrate family, culture and abundant blessings. The captivating Djembe Orchestra will uplift and inspire the audience while the dancers will use their movement to take you on a journey of the African Diaspora.

Karen Love, Founder/Artistic Director UMOJA Dance Company & Usaama Dance Company
Ms. Love earned her MFA from New York University Tisch School of the Arts and her B.F.A. from Montclair State University. Love is the Founder/Artistic Director of Umoja Dance Company (1993) and Usaama Dance Company (1995). In 2006, Love created Wofabe African Dance & Drum Festival, the only African dance & drum festival in the state of New Jersey. Love has been teaching dance at Hillside High School and directing the after-school dance program for the Hillside Public School District for the past seventeen years. She is a former faculty member in the Junior Division at The Alvin Ailey American Dance Theatre, former Visiting Artist in Residence at Kent State University and a former adjunct professor at Montclair State University. Love is a Co-Chair for the New Jersey Performing Arts Center (NJPAC) Dance Advisory Committee, Board Member of DANCENJ, a certified Pilates teacher, certified yoga teacher and member of NDEO. Love was recognized in Who’s Who Among American Teachers 2004 and 2005, honored as one of the “50 Women You Should Know in Montclair, NJ” and received the “Women of Distinction,” award from the YWCA of Essex and West Hudson. Her choreography has been commissioned and presented at University of Illinois Urbana-Champaign, DTW Freshtracks, Aaron Davis Hall, The Yard, Symphony Space, Bates Dance Festival, Duke University, Northern Illinois University, MSU, NYU, Montclair High School and Newark Arts High School.