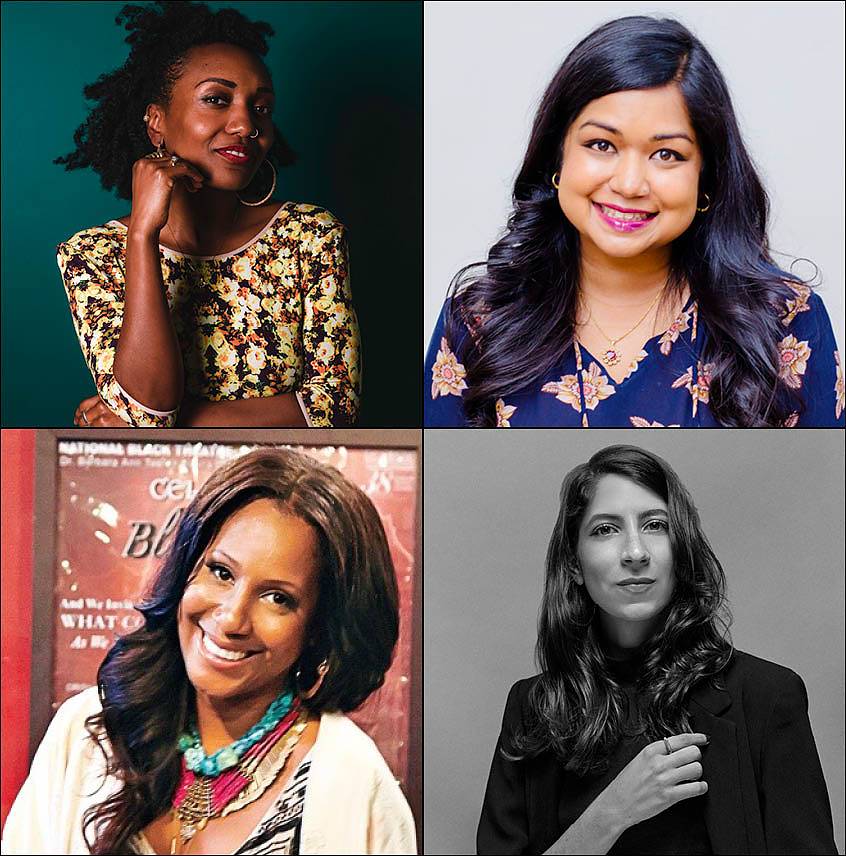 What Does Racial Diversity Look Like in a Race-Specific Organization?

What Does Racial Diversity Look Like in a Race-Specific Organization?
A Conversation with Sade Lythcott, Jafreen Uddin, and Natalia Viera,
Moderated by Rebecca KellyG

In this moment of pandemic-related loss and renewed public awareness of racial injustice, we find ourselves overwhelmed by proliferating accounts of racism, from assaults targeting Asian American communities in the name of COVID-19 to the long history of police brutality against Black communities. As a race-specific organization, A4 reflects on our efforts and practices toward not only allyship, but also representation. In order to find a way forward, we are asking: What does diversity and racial equity look like in a race- and/or ethnically-specific organization? And how can race- or ethnicity-specific organizations and communities work together?

Access Information: This performance includes live ASL interpretation and captioning.
Please register for the Zoom event via the link provided.

Rebecca KellyG (she/her), founder of Rebecca KellyG Consulting, is an Equity and Justice facilitator, interdisciplinary artist, and former civil rights attorney. Her practice centers on working with people in creative communities to separate themselves from socially prescribed identities, decolonize the imagination, generate collective growth, and move culture and institutional practices toward equity. Select speaking appearances include The United State of Women, UC-Berkeley, LCT3, The Broadway Advocacy Coalition, and The New England Bar Association. She holds such honors as The Diversity and International Action Council Adjunct Professor Award for Diversity and Inclusion from Wagner College; George N. Lindsay Civil Rights Legal Fellow with The Lawyers’ Committee for Civil Rights Under Law; and American University Washington College of Law MBP Catalyst for Change Award. Her work has been included in The Guardian, Rolling Stone, and Elia Alba’s book The Supper Club. She has a J.D. from the University of Connecticut School of Law and a B.A. in Theatre Performance from Wagner College. Visit www.rebeccakellyg.com for more information about Rebecca.

Harlem native Sade Lythcott is the Chief Executive Officer of the historic National Black Theatre (NBT), the nation’s first revenue generating Black arts complex and the longest run theater by a woman of color. Sade is the daughter of the late Dr. Barbara Ann Teer, founder of NBT and legendary champion of African-American arts and culture. Sade currently serves as the chair of the Coalition of Theaters of Color, an alliance of 52 theaters across New York City, founded by Ossie Davis and Ruby Dee in 2004 to combat the systemic inequities in the field and to ensure that theaters of color are funded equitably. Most recently, Sade co-leads Culture @ 3, a daily call that brings together more than 300 cultural leaders from across NYC to help navigate COVID-19 and leads its reopening working group, helping New York’s cultural sector navigate reopening post the COVID-19 statewide quarantine. Lythcott also proudly sits on the National Board of Advisors for Art in a Changing America. Sade’s activism work has been written about in national publications including The New York Times, Harper’s Bazaar and Essence. She is the recipient of numerous awards including the Key to Harlem for her excellence in the Arts, the Networks Journal’s Top 40 under 40 Award, the Legacy Award from Black Theatre Network, and the Cultural Icon Award by Harlem Fashion Week. In 2012, Lythcott wrote and produced the highly acclaimed musical A Time To Love, garnering three AUDELCO nominations and currently in development in partnership with the world famous Apollo Theater.

Jafreen Uddin is the Executive Director of the Asian American Writers’ Workshop. She is the first woman to lead the organization since its founding in 1991. With over a decade of experience working in the public sector, she specializes in communications, education, and fundraising. She most recently served as Deputy Director of Development for Special Events with PEN America, managing a high-level portfolio of events and cultivation activities. Prior to joining PEN America, she helped oversee Executive Education as an Assistant Director with NYU’s Stern School of Business, developing and coordinating both degree and non-degree programming for cohorts of senior-level executives. She began her career with a nearly-eight-year stint at the Brennan Center for Justice at NYU School of Law, where she helped create the infrastructure for the public programming calendar of events, and spent nearly three years managing an online Book Salon for Asian Media, spotlighting writers and artists from the greater Middle East/South Asia region. She regularly volunteers her time with a number of local South Asian and Muslim organizations in New York City, including serving as Chairperson of the Columbia Muslim Alumni Association from 2011-2015 and as a current Board Member for Laal-NYC. She received her B.A. in political economics from Barnard College, Columbia University, and her M.A. in Global History from NYU’s Graduate School of Arts and Science.

Natalia Viera Salgado was born in San Juan, Puerto Rico, and has worked as a curator, researcher, and curatorial consultant in Puerto Rico and New York City. In 2017 she co-founded Pública Espacio Cultural, an independent art space in her hometown that aims to provide a platform for local and international artists and strengthen relationships between Puerto Rico and a global audience. Her art historical research focuses on contemporary art in relation to decolonial practices, architecture, social and environmental movements, and new media, with a keen interest in hybrid and multidisciplinary projects. Previously she worked at institutions such as Instituto de Cultura Puertorriqueña for the 4th Poly/Graphic Triennial: San Juan, Latin America and the Caribbean; El Museo del Barrio; Art in General; Socrates Sculpture Park; the Center for Puerto Rican Studies at Hunter College; and The Nathan Cummings Foundation. Viera received an Andrew W. Mellon Foundation grant as part of La Residencia, a co-located residency program in partnership with Pública Espacio and the Abrons Arts Center. She earned an M.A. in Curatorial Practice from the School of Visual Arts, New York, where she was awarded the Alumni Scholarship Award for her thesis exhibition Isla Imaginaria (2018). Viera is a founding member of Colectivo se habla español, a collective established in 2017, that develops artistic and social projects that expand the limits of language while addressing migration, identity, human rights, and memory. Viera is currently the Assistant Curator of Visual Arts at Americas Society, New York.

The Rubin Foundation believes in art as a cornerstone of cohesive, sustainable communities and greater participation in civic life. In its mission to make art available to the broader public, in particular to underserved communities, the Foundation provides direct support to, and facilitates partnerships between, cultural organizations and advocates of social justice across the public and private sectors. Through grantmaking, the Foundation supports cross-disciplinary work connecting art with social justice via experimental collaborations, as well as extending cultural resources to organizations and areas of New York City in need. sdrubin.org