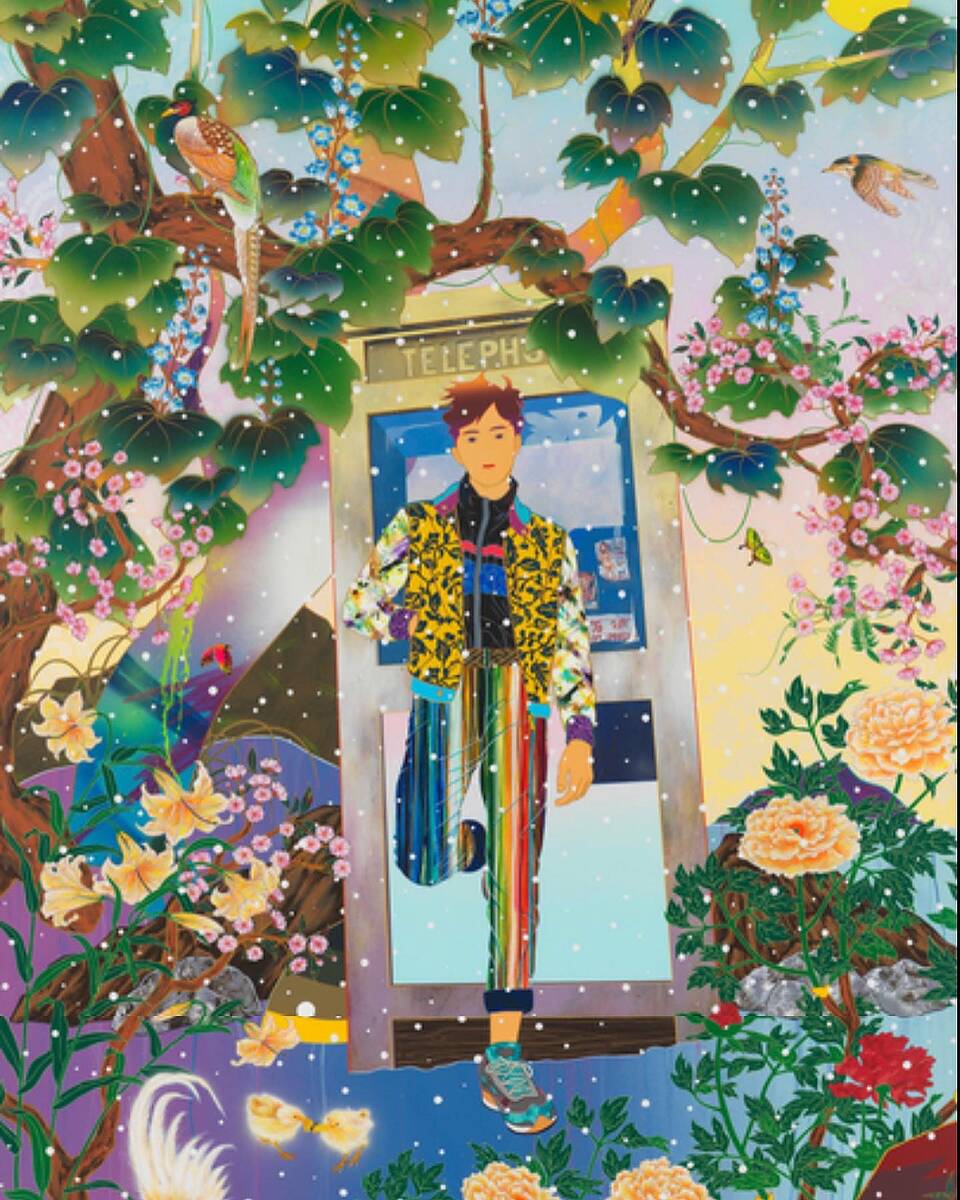 Artsy Impact Auction
Tomokazu Matsuyama’s Another Believer, from his renowned “Fictional Landscapes” series, encapsulates the most pertinent themes explored throughout the artist’s oeuvre. The painting’s aesthetic is derived from an amalgamation of inspirations taken from diverse cultures, and range from Pop art, Abstract Expressionism, consumer commodities and contemporary advertising to Japanese art from the Edo and Meiji eras. Matsuyama meticulously distributes these influences over the surface of his work as a way to vibrantly depict our transient and diverse society in which the border of the real and the non-real is blurred. Well rooted in the art historical canon, Another Believer is a preeminent example of the artist’s incorporation of Eastern and Western art historical principles which echo his own bicultural background, as the artist grew up living between Japan and America.

Describing his “Fictional Landscapes” series, the artist explains: “…I’ve used people and iconography found while browsing fashion and interior design magazines at New York newsstands, exquisite plants and animals from traditional Chinese and Japanese paintings, and the embodiment of abstract expressionism born in 1950s America. I then remix and imbue everything with information until I’ve created something new. By naturally juxtaposing all the different elements I’m attempting to free them from the constraints of time, locality and context.”

Another Believer is a fully developed embodiment of the “Fictional Landscapes” series, exploring the relationships between connectivity and dysconnectivity, linear and dimensional time, and rural and urban landscape by depicting the central figure stepping out of a London telephone booth overlain with poster ads from the 1980s and 1990s into an extratemporal surrealist garden. Degeneration and renewal is also explored in the painting as exemplified by the two chicks tearing apart the butterfly in the lower left quadrant. Aspects from all four seasons surround the central figure: the bright and budding flowers of spring, the luscious greenery of summer, the turning leaves of fall, and winter snow, blurring the line between the bordered time-stamped interior of the phone booth and the expansive timeless natural surroundings.

Matsuyama also expressed being influenced by the delicate simplicity of Henri Rousseau’s works, which is evident in the forms of the plants and flowers often referenced from a variety of historical paintings.The figure’s clothes further reflect the harmonious melange of different influences as exemplified by the meticulous depiction of leaves on the figure’s jacket which intertwine him within the natural landscape but stylistically cement him in modern times. The patterned sleeves of the figure’s jacket are a nod to American abstraction, and the bright bands of color on his pants serve as a kaleidoscopic runway. In the revelation of these unified elements, Another Believer justifies the coexistence of paradoxical truths to highlight the transient nature of our modern world.

Another Believer is characteristic of Matsuyama’s most desired ephemeral hallucinatory dreamscapes exploring contemporary identity and a balanced contemporary ecosystem. The detailed surface is the outcome of over three months of layered brushwork, resulting in intricate flowers, animals, fabrics and patterns that demand and satisfy a deeper study. The central figure’s thoughtful glimmering framing is reminiscent of a gilded manuscript as he stands suspended between time, land and sea, access and disconnect, interior and exterior. The composition highlights the artist’s mastery of flat yet dynamic perspective, at once bringing the viewer into the figure’s world through channeled openings and the mountainous background, and pushing the viewer back out with intentional lines that emphasize the surface’s two-dimensionality. Another Believer, derived from the title of a song on the artist’s playlist, also invites the viewer to bring their own interpretation to the work based on their individual and shared histories, resulting in a fluid and thoughtful exchange.

Tomokazu Matsuyama’s Another Believer is one of the most important paintings by the artist to be presented at auction. Another Believer is a rare example of a large-scale rectangular canvas by the artist, and is one of the most complex, intricate, dynamic and mature paintings in his oeuvre. Matsuyama’s works have been exhibited globally and most recently the artist had a solo exhibition at The Long Museum West Bund in Shanghai in November 2020 which traveled to The Long Museum Chongqing in Chongqing, China in the Spring of 2021.