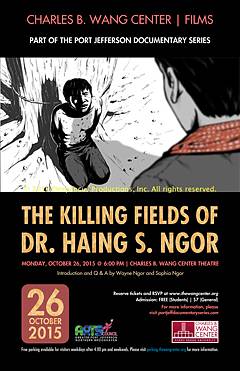 Set against the backdrop of Cambodia’s Khmer Rouge reign of terror, The Killing Fields of Dr. Haing S. Ngor chronicles a powerful journey of love, loss and reconciliation. The years encapsulating this horrific period are seen through the eyes of Dr. Haing S. Ngor, who escaped to America and recreated his experiences in The Killing Fields, winning an Oscar® for his first film. From 1975 to 1979, the Khmer Rouge’s social experiment transformed the country into a communist agricultural utopia, causing the deaths of some two million Cambodians who perished from mass starvation, forced labor, torture, slavery, ethnic cleansing and political executions. Dr. Ngor became the de facto worldwide ambassador for truth and justice in his homeland, only to be gunned down in an alley in Chinatown Los Angeles – a case still surrounded by transnational conspiracy theories.