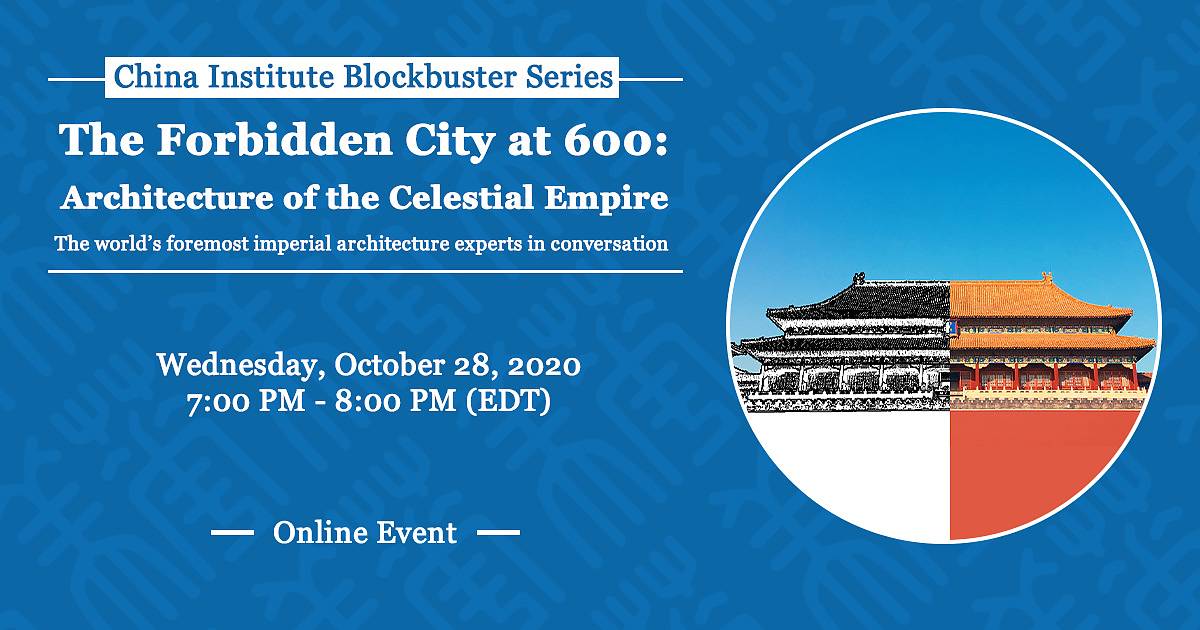 The Forbidden City at 600: Architecture of the Celestial Empire

To commemorate the 600th anniversary of the Forbidden City, China Institute and the AIA Center for Architecture co-present an intimate conversation between the world’s top experts on Chinese architecture. Liu Chang, China’s preeminent authority on imperial architecture, joins American China scholar Nancy Steinhardt to discuss the beauty and meaning of the Forbidden City and its importance to Chinese architecture today. Palace Museum official REN Wanping will open the program with behind-the-scene stories.

For more than 500 years, the Chinese Empire was ruled from behind the vermillion walls of Beijing’s Forbidden City, which was the home of the Emperor and the imperial court. The design of this city-within-a-city reflects China’s philosophical traditions, as well as deep beliefs about man and nature. Its history and design continue to inspire China’s top architects today.

This event is part of Archtober, the AIA Center for Architecture’s tenth-annual festival of architecture activities, programs and exhibitions taking place during the month of October.

Speakers’ Bios
LIU Chang is widely considered to be one of China’s top experts on the architecture of the Forbidden City. An Associate Professor at the School of Architecture, Tsinghua University, Dr. Liu received his fundamental education on architecture at Tsinghua, and then worked at the Palace Museum. During his time at the Palace Museum, he broadened his knowledge about Chinese historic architecture and began training and working as an architectural conservator. In 2000, Dr. Liu became China’s representative of the World Monuments Fund. Dr. Liu’s doctoral dissertation, “Studies on Interior Design of Qing Court”, launched him as a leading thinker in architectural history and architectural conservation. His academic publications include 10 books and over 100 journal papers.

Nancy S. Steinhardt is one of the world’s leading experts on Chinese architecture. Steinhardt is Professor of East Asian Art and Curator of Chinese Art at the University of Pennsylvania, and the author of more than 10 books, including the recently published, Chinese Architecture: A History (Princeton University Press, 2019). She is a recipient of grants from the Guggenheim Foundation, Institute for Advanced Study, National Endowment for the Humanities, American Council of Learned Societies, Getty Foundation, and many more. She has been an advisor, guest curator, and author for exhibitions at China Institute, Asia Society, the Metropolitan Museum, Japan Society, Chicago Art Institute, Smart Museum, and the Penn Museum. We at China Institute know her for her long service on the Gallery Committee.