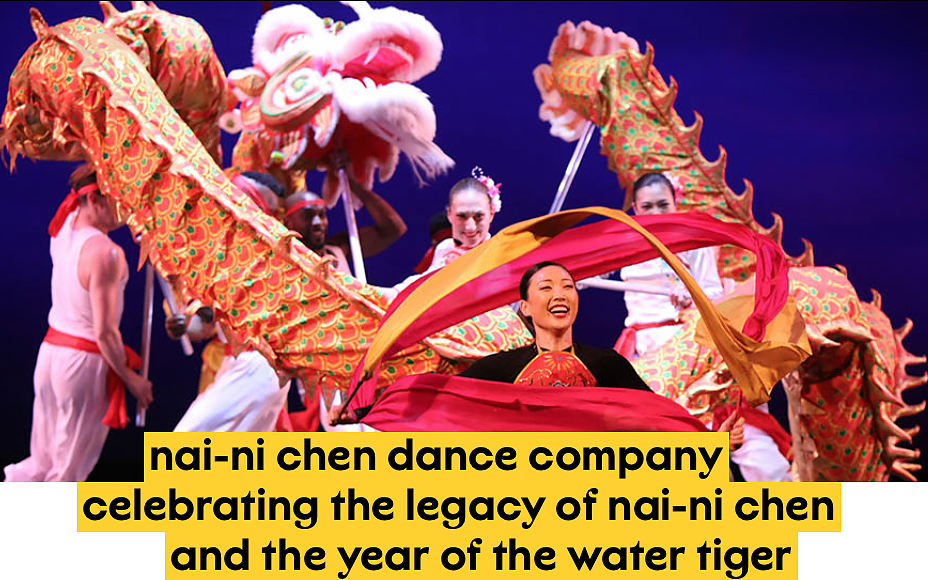 (NEWARK, NJ) – The critically acclaimed Nai-Ni Chen Dance Company presents Year of the Water Tiger at the New Jersey Performing Arts Center (NJPAC) in a family-friendly matinee celebration on Saturday, May 21, 2022. Paying tribute to the incredible dancer, choreographer, and educator Nai-Ni Chen, this marks the Company’s return to NJPAC after Chen’s untimely passing in December 2021. Nai-Ni Chen Dance Company has been a beloved presence at NJPAC since it first opened its doors in 1997.

In addition to vibrant dance commemorating the Year of the Water Tiger, NJPAC will also welcome the innovative classical music group, the Ahn Trio. (Program details are below.)

The afternoon begins with demonstrations and fun activities staged in the lobby before the performance. Year of the Water Tiger celebration combines the elegance of traditional Asian art and the beauty of American modern dance with thrilling choreography, exotic music and dazzling acrobats. Audiences get close to the exciting sights of dancing lions and dragons, the lilting sound of Chinese pipa and erhu, and vibrant gold and red costumes and props.

On stage, the first part of the program starts with one of the most popular dances performed in the Chinese New Year Double Lions Welcome Spring and the most colorful Chinese traditional dances in the repertory, Festival and Dragon Dance. Sandwiched between is one of Na-Ni Chen’s most iconic dances, Raindrops, which takes the audience to the choreographer’s childhood. To express the Company’s hope for the next generation, Company Director Ying Shi brings Green Lotus by eight junior dancers from her academy.

In the second half of the program, the dancers of Nai-Ni Chen pay tribute to the grace and power of Nai-Ni Chen’s work by performing her signature work, Incense. Making its NJPAC debut is the chamber music ensemble, Ahn Trio. Hailed by The Los Angeles Times as “exacting and exciting musicians,” the three sisters (pianist Lucia, violinist Angella, and cellist Maria) have earned a distinguished reputation for embracing 21st century classical music with their unique style and innovative collaborations. The Ahn Trio is a longtime collaborator of Nai-Ni Chen and they will play Ave Maria by Bach; Concrete Stream with music composed by Kenji Bunch, their first collaboration with Nai-Ni Chen, and Skylife, one of their signature works.

The program ends with UNITY, one of Nai-Ni Chen’s final work, completed by PeiJu Chien-Pott, the Company’s current Director of New and Creative Dance who worked with composer Jason Kao Hwang to finalize the powerful work that is Nai-Ni Chen’s urgent call to the world.

Bridging the grace of Asian elegance and American dynamism, the Nai-Ni Chen Dance Company is a premier provider of innovative cultural experiences that reflect the inspiring hope and energy of the immigrant’s journey. The company’s ground-breaking works have focused on themes from ancient legends that reflect issues of the present time to purely abstract, contemporary dances influenced by a mix of cultures Nai-Ni Chen experienced in New York. An Asian American company that celebrates cross-cultural experience, the Company’s productions naturally bring forth issues of identity, authenticity, and equality. The Company’s repertory is based on the works of its recently passed founder, Choreographer/Dancer, Nai-Ni Chen who is a unique artist whose work crosses cultural boundaries. Each of her dances reflect her personal vision as an immigrant and an American female artist with deep roots in the Asian culture. From this very personal perspective, she creates new works that reflect current issues with global influences. Many of her works have been developed in collaboration with renowned artists such as the Ahn Trio, Glen Velez, Joan La Barbara, Myung Hee Cho, Karen Young, Bei Dao among others. The Nai-Ni Chen Dance Company is currently directed by Artistic Director Greta Campo, Director of Traditional Dance, Shi Ying, and Director of Contemporary/Creative Dance, PeiJu Chien-Pott.

The Company has presented at some of the most prestigious concert halls such as the Joyce Theater, Lincoln Center in New York, and the Tampa Bay Performing Arts Center in Florida. The Company appears annually at the New Jersey Performing Arts Center, Queens College, the College of Staten Island and on Ellis Island. Internationally, the Company has presented at international festivals including Open Look Festival in Russia, the Silesian International Contemporary Dance Festival, the Konfrontations International Festival in Poland, the Chang Mu International Dance Festival in Korea, the Meet in Beijing International Arts Festival in China, and the Tamaulipas International Arts Festival in Mexico.
The Nai-Ni Chen Dance Company has received more than 20 awards from the National Endowment for the Arts and numerous Citations of Excellence and grants from the New Jersey State Council on the Arts. Advancing Dance Education, the Nai-Ni Chen Dance Company is currently in residence in New Jersey City University pioneering a program with the University’s A Harry Moore Laboratory School teaching dance to urban children with disabilities. For additional Company information, visit their website, www.nainichen.org; write to Nai-Ni Chen Dance Company, P.O. Box 1121, Fort Lee, NJ 07024; or call (800) 650- 0246.

About NJPAC
The New Jersey Performing Arts Center (NJPAC), located in downtown Newark, N.J., is America’s most diverse performing arts center, and the artistic, cultural, educational and civic center of New Jersey – where great performances and events enhance and transform lives every day. NJPAC brings diverse communities together, providing access to all and showcasing the state’s and the world’s best artists while acting as a leading catalyst in the revitalization of its home city.

Through its extensive Arts Education programs, NJPAC is shaping the next generation of artists and arts enthusiasts. NJPAC has served more than 10 million visitors (including over 1.9 million students and families) since opening its doors in 1997, and nurtures meaningful and lasting relationships with each of its constituents.

One of the most popular dances performed in the Chinese New Year Celebration. The Lion Dance is a prayer for peace on earth as a child is able to play with a ferocious beast in harmony.

There are many styles of the Lion Dance in China, this program showcases the Northern style that combines the dancers’ acrobatic skills, coordination and concentration to create a fun and dramatic story. The Lion Dance is said to have originated in the Tang Dynasty over 1,000 years ago when the Emperor held a festival where people dressed in animal costumes.

This dance draws inspiration from the choreographer’s childhood memory of the city where she was born, Keelong. The city is also known as the “Rain Harbor” in Taiwan.

There are many celebrations in the Chinese tradition. One of the most colorful is the Dragon Boat Festival. In this dance, the blue flag symbolizes the waves in the water, which lead the dancers and racers to their victory. The colorful ribbons symbolize the prosperity of the village. The possession outside of the village temple further enhances the festive atmosphere. In the end, the Dragon Parade brings good luck and prosperity to everyone.

This dance was originally inspired by the sculpture titled Nine Muses by Carlos Dorian installed at Grounds for Sculpture in Hamilton, New Jersey. The choreographer draws ideas from the offering of incense in the long corridors of an ancient temple in her childhood. The rising white clouds of the incense is said to bring the believer’s prayer from their hearts to God’s ears. The music reminds her of the mystical elements of nature and the more abstract, formal elements that give structure to our faith and thus our lives. Dancers have chosen this dance to remember the power and grace of Nai-Ni Chen’s choreography.

One of the last and final works of Nai-Ni Chen, completed by PeiJu Chien-Pott with commissioned music by Jason Kao Hwang. Unity was inspired by the story that a single stick is easy to break but a bunch is not easily breakable. In this dance, the choreographer integrated numerous elements of Chinese Martial Art into the dance, and all the company dancers received regular training from Martial Arts champion Sifu Yuan Zhang. The story speaks to the power of gathering and Nai-Ni Chen’s hope for community unity during our struggle for equity and anti-hate. The chopstick bundle in the dance also represents the dynamite that the Chinese workers used to blast the mountains of the American West when building the Continental Railroad.