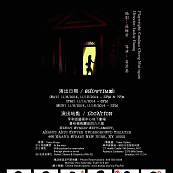 Jealousy. Guilt. Paranoia. This intense psychological thriller will draw you into the hidden conflicts of three protagonists as it probes the layers of human emotions and relationships, between husband and wife, between old friends. An unexpected visit triggers a series of tragic events, exposing dark secrets. These irreversible turns quickly plunge into a spiral of suspicion, manipulation and humiliation. The play premiered in Hong Kong to rave reviews and has had three sold-out runs. It swept four major awards at the 2009 Hong Kong Drama Awards, including Best Script, Best Director and Best Actress.

Four Seas Players was established as a community outreach program for old and new Chinese immigrants of different generations. It cultivates an interest in and appreciation for the performing arts, through artistic involvement, thus nurtures a harmony of spirits in the Chinese community.