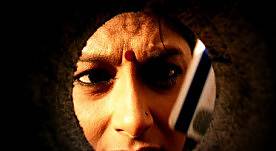 In Focus: An Afternoon of Film and Video

An afternoon of sessions focusing on current film and video practices of South Asian women artists. We begin with spotlighting acclaimed filmmaker Shalini Kantayya in conversation with NYU professor, Tejaswini Ganti on the subject of fact vs. fiction in film, followed by a screening of short experimental videos by 10 international artists.

$5 Suggested donation. Open to the public.

Where do the lines between fact and fiction blur and what are the ethics of representing the truth? Filmmaker and eco-activist Shalini Kantayya will present her work, ranging from science fiction to documentary film. Shalini will then be joined by NYU professor, Tejaswini Ganti, in a discussion on fact vs. fiction in filmmaking and storytelling. Join us for a conversation that explores these central questions in crafting and representing stories through film.

Patterns of Interaction A screening of short experimental videos, followed by a Q & A and reception. 3:30pm

“Patterns of Interaction” constructs an interplay between short experimental videos by 10 international artists. The videos address a range of subjects including capitalism, war, mortality, cultural and corporeal memory, and various perceptual and spatiotemporal experiments. The artists utilize abstract, non-linear and/or repetitive structures and motifs to construct vivid forms of sensory immersion for the viewer.

This screening is co-sponsored by 3rd i NY