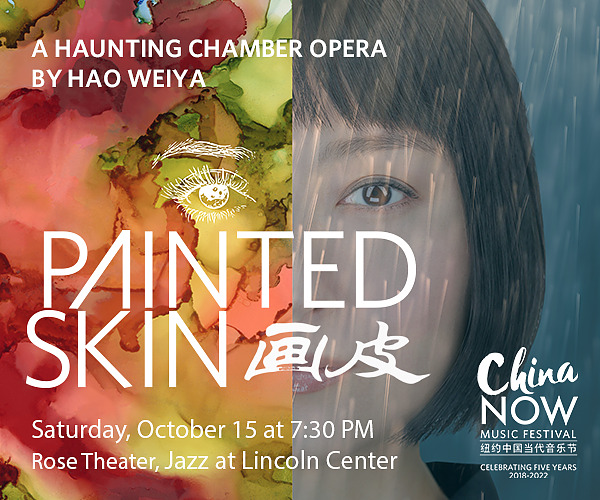 Saturday, October 15, 2022
7:30PM
“Painted Skin” will take place on October 15 at Rose Theater, Jazz at Lincoln Center. It features the US premiere of Painted Skin, a chamber opera based on a ghost story by the early 18th century Qing Dynasty author Pu Songling, which was originally published in Strange Tales from a Chinese Studio. Pu’s story is about a demon who presents herself as a beautiful woman; if she can capture the heart of a young (and happily married) scholar, she will be able to permanently assume human form. In this performance of Hao’s opera, co-produced by the US–China Music Institute and the Central Conservatory of Music and conceived by Michael Hofmann, the story is transported to a contemporary American college setting. All three roles—the demon, the professor, and his wife— are performed by women. Mezzo-soprano Kristin Gornstein, who plays the professor, and coloratura soprano Holly Flack, who plays the professor’s wife, will both sing entirely in Chinese. The Kunqu opera singer Qian Yi—who first came to the attention of American audiences with her star performance in Lincoln Center’s 1999 staging of the 19-hour opera Kunqu opera Peony Pavilion—plays the demon, and was praised by The New York Times “radiant and energetic…a graceful charmer”.