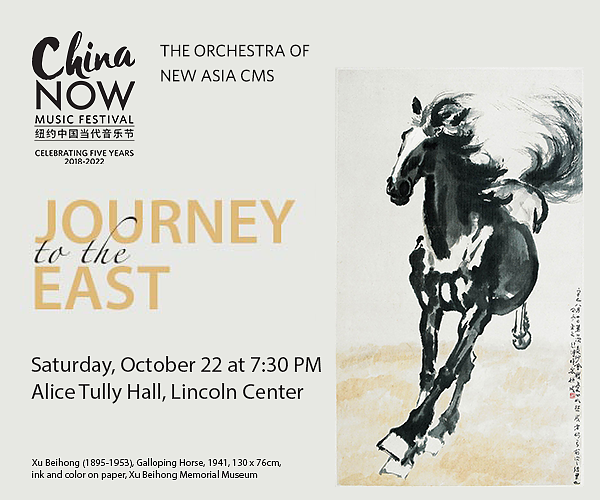 Saturday, October 22, 2022
7:30PM
“Journey to the East” will take place on October 22 in Lincoln Center’s Alice Tully Hall. The first half of the concert will include the concert version of a rarely performed work, The Nymph and the Farmer, a 35-minute, one-act chamber opera on Chinese themes by composer Alexander Tcherepnin. The opera, based on an old Chinese folk tale, is sung in French with English and Chinese subtitles and features American soprano Lucy Fitz Gibbon as the nymph and Chinese tenor Yi Li as the farmer. Tcherepnin taught at the Shanghai Conservatory in the 1930s and nurtured the early generation of Chinese composers, including Jiang Wenye, the composer whose works are featured in the second half of this concert, beginning with Taiwan Dance, which is perhaps the most representative of Jiang’s works. The next work is the third movement of a piano concerto composed by Jiang in 1964 which had been lost during the cultural revolution and was only recently discovered. The movement is called Rooster Crowing in the Rain—Recalling Past Valor (Xu Beihong’s Color-and-Ink Paintings). The concerto is dedicated to Fangfang Xu—who will perform it for us with The Orchestra of New Asia CMS—and was inspired by the art of her father Xu Beihong, the renowned Chinese painter. Images of Xu’s paintings will accompany his daughter’s performance. The program will conclude with the world premiere of Capriccio Xu Beihong which was commissioned by the festival and written by Chinese-Canadian composer Huang Anlun. This closing concert is dedicated to Alexander Tcherepnin and Xu Beihong, who sought throughout their lives to connect East and West through their art and simultaneously nurtured generations of artists who did the same.