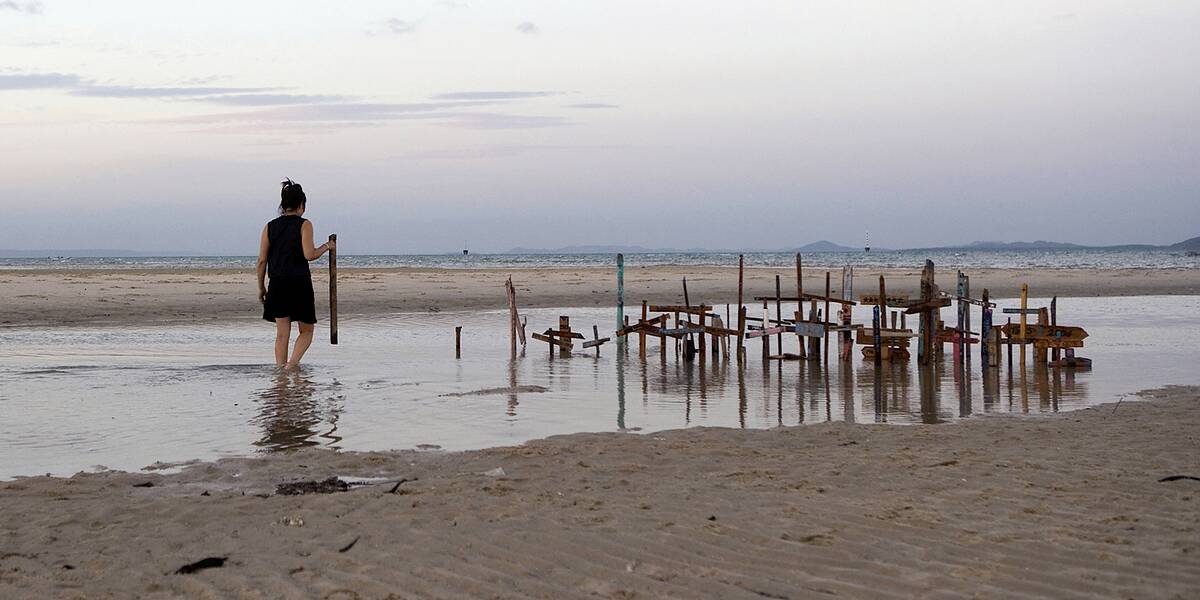 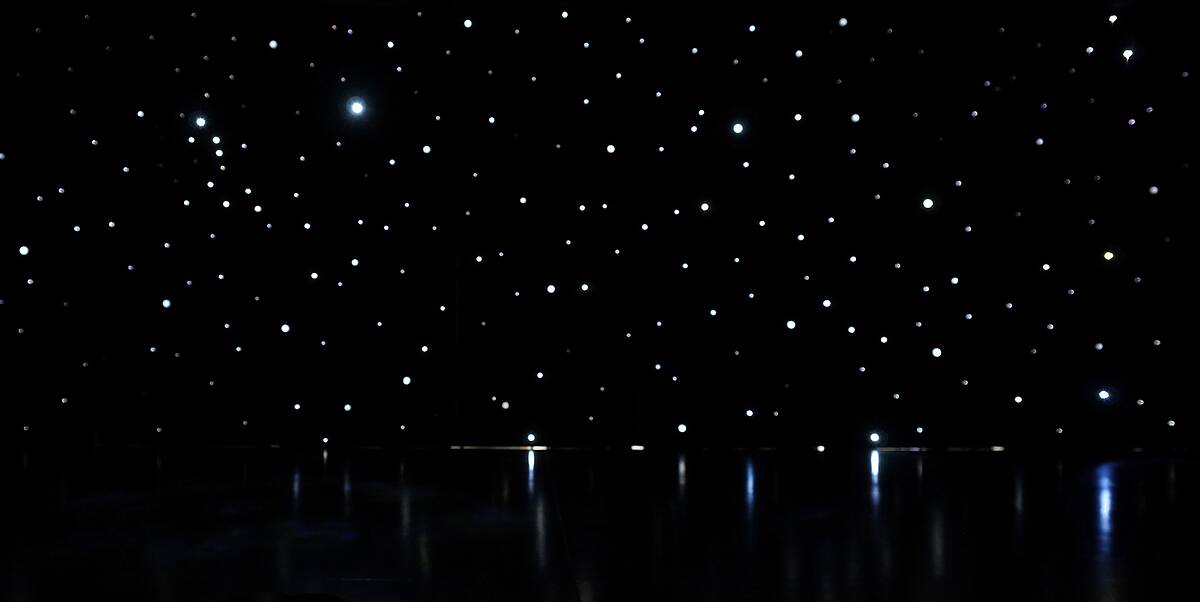 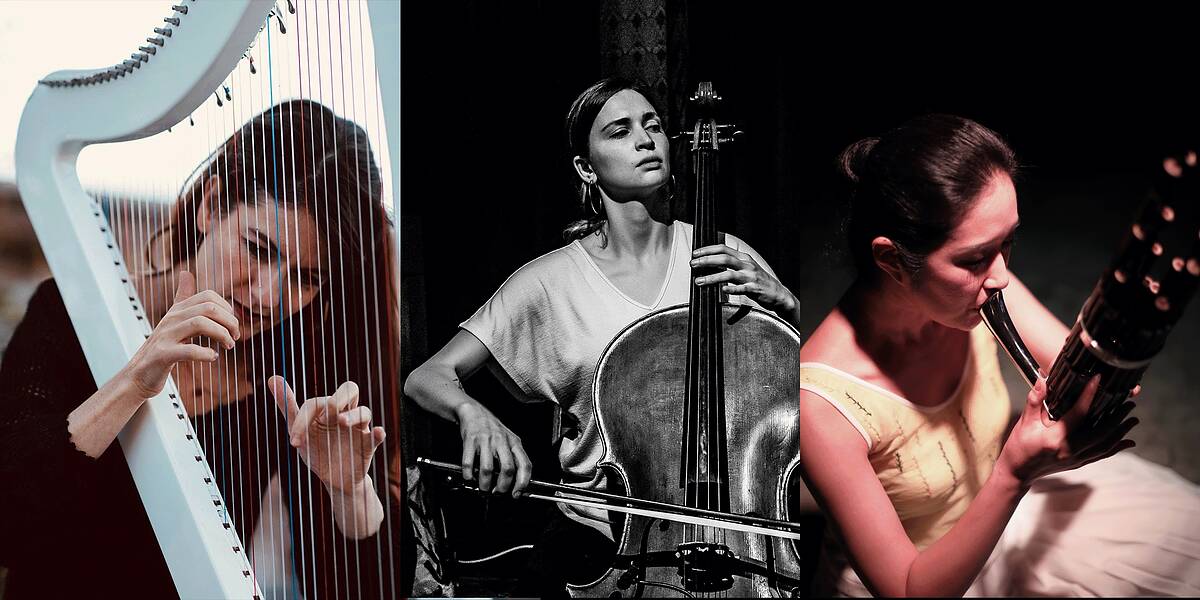 Crossing Boundaries Vol. 17: Through Her Eyes

CRS presents Crossing Boundaries Concert Series Vol. 17: THROUGH HER EYES on June 25, 2022 at 7 pm in the award-winning White Room at CRS. The program features three female musicians — gamin (piri, saenghwang), Jacqueline Kerrod (electric harp), and Mariel Roberts (cello) — and video by Sook Jin Jo from her art installations in Brazil and South Korea, including her installation of 304 lights in remembrance of the Sewol Ferry disaster in which 304 people, mostly high school students, died en route to Jeju island, South Korea on April 16, 2014. This concert is dedicated to those beautiful spirits who became stars.

Curated by multi-Instrumentalist gamin, this fifth season of Crossing Boundaries consists of three concerts exploring the theme of WOMEN IN MUSIC performed by female and female-identifying musicians. Following the performance there will be a conversation with the audience about the concert and the theme of gender in the music industry.

Tickets are $20 – $30 and are available online through eventbrite.com and at the door for cash only, if not sold out. Seating is limited and includes floor seating on blankets. All patrons must show proof of vaccination at the door in order to be admitted, no exceptions. In addition, masks must be worn throughout.

Photo credits: The photo of the beach is a still from the video of “Crossroads,” a one-hour installation & performance copyright @ 2008 by Sook Jin Jo, which took place in Itaparica, Brazil in 2008, sponsored by the Sacatar Foundation, photo: Sang-Taek Oh. The photo of the stars is of “The Face of Heaven,” a 304 LED light Installation copyright @ 2016 by Sook Jin Jo, which was commissioned by Gyeonggi Museum of Modern Art for April: the Eternal Voyage, an exhibition memorializing the 304 victims of the Sewol ferry disaster in 2014, photo: Tae Hoon Lee.

“Gamin is one of the most celebrated piri, taepyeongso and saengwhang performers in Korea today.” — Silkroad

“Cellist Mariel Roberts has evolved to become one of the most adventurous figures on New York’s new music scene—one with a thorough grounding in classical tradition but a ravenous appetite for and tireless discipline in new work.” — Bandcamp Daily

“Many people think of original music in a hierarchical sense, looking down on pure improvisation as something that doesn’t require mastery or discipline. One listen to Jacqueline Kerrod’s solo harp debut will serve as an epiphany for those cynics. In fact, I found myself awestruck by Kerrod’s seemingly limitless expressive range.”
— Yoshi Maclear Wall The Whole Note

“Jo’s work operates at the intersection of abstraction and human need, creating intimate spaces and experiences of peace and solace that acknowledge emotional or spiritual connections.” — Sculpture

Face of Heaven
“The Face of Heaven” is a memorial Installation for the Sewol Ferry disaster in which 304 people, mostly high school students, died en route from Incheon to Jeju, South Korea on April 16, 2014.

The work is an experiental installation composed of 304 lights shining like stars through different size holes; offering a metaphor of longing, remembrance and comfort for those who died in the Sewol ferry tragedy, and shedding light on the dark reality of an unsolved issue.

“When he shall die,
Take him and cut him out in little stars,
And he will make the face of heaven so fine
That all the world will be in love with night
And pay no worship to the garish sun.”
– William Shakespeare

Crossroads
Inspired by: “It is a true philosophy to meditate on death.”

While working at a Sacatar Foundation residency in Brazil in late 2007 and early 2008, the artist spent a great deal of time observing nature: The sun rising in the morning and the coming of night everyday….The water coming in and out everyday. The ebb and flow of the tide which is different every day.

This is a piece to reflect the artist’s observations, experiences and thoughts.

Wooden grave markers, reminiscent of primitive crossroad signs, were placed in an elemental meeting of earth, sea, and sky. Installed at sunset on the shore at low tide, I gathered them up before they washed away.

CROSSING BOUNDARIES is a concert series devoted to dissolving boundaries between performers and audiences, the traditional and contemporary, classical and experimental, and the culturally specific and the global. Series curators are given the opportunity to create unique performance events in collaboration with musical, visual, and/or movement artists of their choosing.

Inaugurated in 2018, Crossing Boundaries is made possible in part with public funds from Creative Engagement, supported by the New York City Department of Cultural Affairs in partnership with the City Council and the New York State Council on the Arts with the support of Governor Andrew Cuomo and administered by LMCC. LMCC empowers artists by providing them with networks, resources, and support, to create vibrant, sustainable communities in Manhattan and beyond.

GAMIN is a Korean-born NYC-based multi-instrumentalist specializing in traditional Korean wind instruments. She tours the world performing both traditional Korean music and cross-disciplinary collaborations. She is a scholar and designated Yisuja, official holder of Korea’s Important Intangible Cultural Asset No. 46. From 2000 to 2010, gamin was the principal player at the National Gugak Orchestra. gamin has received several cultural exchange program grants, including Artist-in-Residence at the Asian Cultural Council, and has collaborated in cross-cultural improvisation with world-acclaimed musicians, presenting premieres at Roulette Theater, New School, and Metropolitan Museum. gamin was featured artist at the Silkroad concert, Seoul, 2018, performing on-stage with the founder, Yo-Yo Ma. For 2020, gamin was selected as artist-in-residency at the HERE Arts Center, NYC, and her album “Nong” was released by Innova Records. gamin’s Carnegie Hall solo début, accompanied by Nangye Gugak Orchestra, scheduled for March 2020, was postponed by Covid 19.

Classically trained from the age of 9, South African harpist JACQUELINE KERROD has worked at the highest level in the classical, pop, free jazz and improvised music worlds. Her debut solo record “17 Days In December” (2021) released on LA-based label Orenda Records was noted as a best debut 2021 by The New York City Jazz Record and selected as an album to listen to by JazzIs Magazine (December 2021). She has toured nationally and internationally with composer and multi-reedist Anthony Braxton, both in duo and as part of his ZIM music ensemble. Their live duo recording was released on Italian label I dischi di Angelica (2020). She was a founding member and co-songwriter of the pop duo Addi & Jacq, who were winners of NYC’s Battle of the Boroughs WNYC 2015, and toured her show “Harps Uncovered” featuring vocalist Hannah Sumner through twelve states of the US. She has played principal harp with top orchestras and performed with elite chamber groups, contemporary music ensembles, and pop superstars including Anohni, Rufus Wainwright and Kanye West.

American cellist and composer MARIEL ROBERTS is widely recognized not just for her virtuosic performances, but as a “fearless explorer” in her field (Chicago Reader). Her ravenous appetite for collaboration and experimentation as an interpreter, improvisor, and composer have helped create a body of work which bridges avant-garde, contemporary, classical, improvised, and traditional music. Roberts is widely recognized for her “technical and interpretive mastery” (I care if you listen) and for performances which seethe with “excruciating intensity” (The Whole Note).

Roberts’ compositions have been performed at venues such as Merkin Hall and Miller Theater in New York City.

Korean born, New York based artist SOOK JIN JO is a multidisciplinary artist. Over the past 30 years, Sook Jin Jo has produced drawings, collages, photographs, sculptural assemblages, performances, installations, public works, and architectural design works. Originally because canvas was too expensive for her as a young artist, she started to use plywood and began to explore found wooden materials. Continuing her work with this medium, she has discovered infinite possibilities for painting, sculpture, installation and beyond. She often chose marginalized sites for her outdoor installations and public artworks. Most of them are site-specific and collaborative, working with professionals and local peoples from diverse communities in many countries, including Sweden, India, Poland, Switzerland, Korea, Bolivia, Nicaragua, Brazil and the United States.

CRS (CENTER FOR REMEMBERING & SHARING) is a spiritual healing and art center founded in 2004 by the writer/lecturer/spiritual counselor Yasuko Kasaki and artist Christopher Pelham. Our mission is guided by A Course in Miracles (ACIM). ACIM says that recognizing that you and your brother are actually one is the only way to experience peace. The mission of CRS is to promote the awareness that limitless creativity lives within each of us. We train minds to recognize the light in themselves and others and provide them opportunities to share their inner vision through the healing and creative arts. Since its founding CRS has provided numerous residencies and performance and exhibition opportunities to artists from all over the world. Currently, CRS is a lead sponsor of M³ (Mutual Mentorship for Musicians), a platform created to empower, elevate, normalize and give visibility to women, non-binary musicians and those of other historically underrepresented gender identities in intersection with race, sexuality, or ability across generations in the US and worldwide, through a radical model of mentorship and musical collaborative commissions.