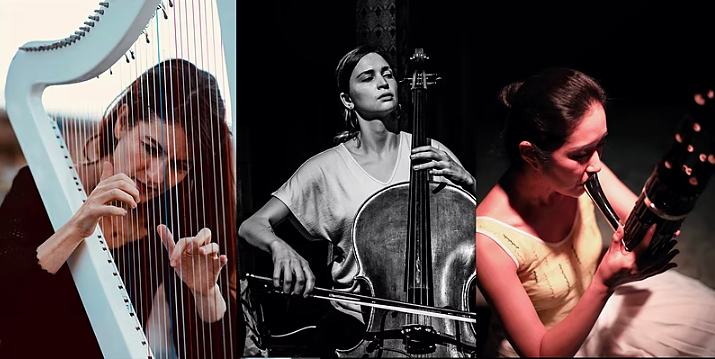 We are excited to invite you to our first in-person Crossing Boundaries concert since 2019! This thrilling program features four stellar artists: musicians gamin (piri, saenghwang), Jacqueline Kerrod (electric harp), and Mariel Roberts (cello) will perform live to video by visual artist Sook Jin Jo from her art installations in Brazil and South Korea, including her installation of 304 lights in remembrance of the Sewol Ferry disaster in which 304 people, mostly high school students, died en route to Jeju island, South Korea on April 16, 2014. This concert is dedicated to those beautiful spirits who became stars.

Curated by multi-Instrumentalist gamin, this fifth season of Crossing Boundaries consists of three concerts exploring the theme of WOMEN IN MUSIC performed by female and female-identifying musicians. Following the performance there will be a conversation with the audience about the concert and the theme of gender in the music industry.

Tickets are $20 – $30 and are available online through [eventbrite.com](eventbrite.com) and at the door for cash only, if not sold out. Seating is limited and includes floor seating on blankets. All patrons must show proof of vaccination at the door in order to be admitted, no exceptions. In addition, masks must be worn throughout.