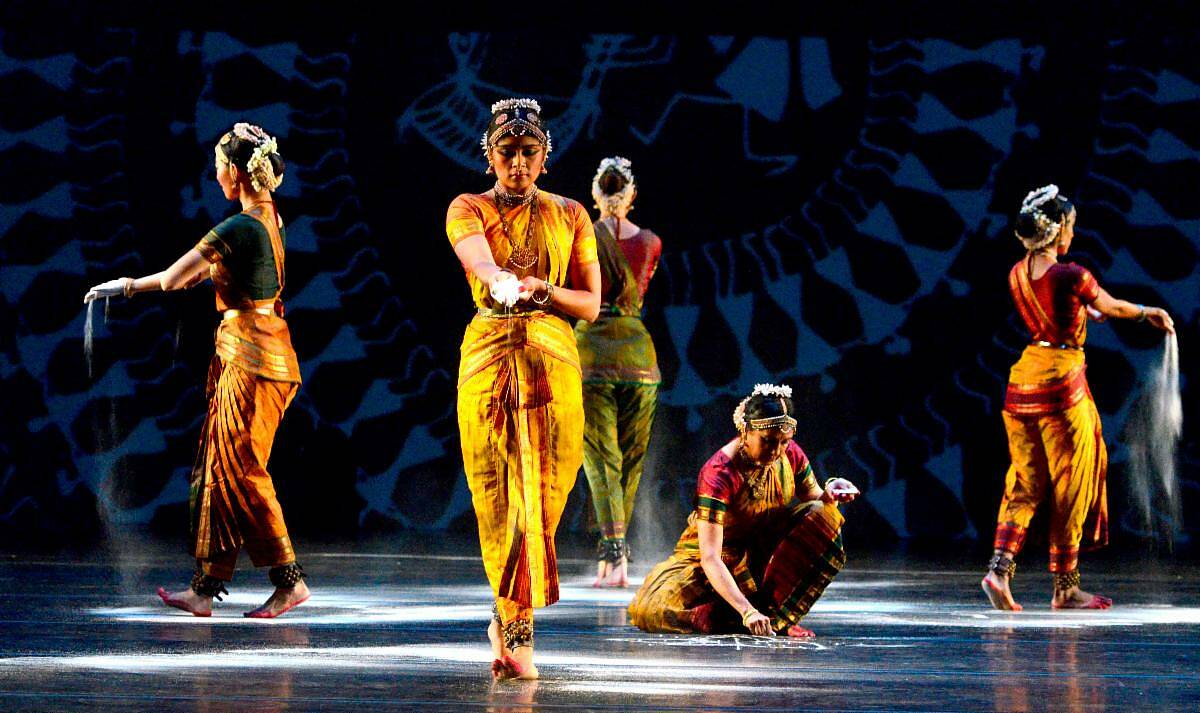 Ragamala Dance Company's Sacred Earth will be presented on July 22, 2022 at 8pm as part of BRIC
Celebrate Brooklyn! At the Lena Horne Bandshell, 9th Street & Prospect Park West, Brooklyn, NY. Sacred Earth is an enchanting work for seven dancers and five musicians that explodes with color, rhythm, and ecstatic movement. To RSVP for the FREE event, visit bricartsmedia.org/events-performances/bric-celebrate-brooklyn-festival/ragamala-dance-company-sacred-earth.

“[the] universal and visual atmosphere is intoxicating, no matter your background…a wholly magnificent piece of live art.” – The Chicago Tribune

Rooted in the expansive South Indian dance form of Bharatanatyam, Ragamala Dance Company manifests a kindred relationship between the ancient and the contemporary. Sacred Earth explores the interconnectedness of our physical environments and our inner states of being. Performed with a stellar musical ensemble from India, the dancers create a sacred space to honor the divinity in the natural world and the sustenance we derive from it. Inspired by the philosophies behind the ephemeral arts of kolam and Warli painting, and the Tamil Sangam literature of India, Sacred Earth is Ranee and Aparna Ramaswamy's singular vision of the beautiful, fragile relationship between nature and man. RSVPs are encouraged by not required. Entry is first come, first served, and RSVPs help you stay up-to-date on show information.

Support for the creation of Sacred Earth was made possible in part by the National Endowment for the Arts, the National Dance Project of the New England Foundation for the Arts (with lead funding from the Doris Duke Charitable Foundation and additional funding from the Andrew W. Mellon Foundation, the Community Connections Fund of the MetLife Foundation, and the Boeing Company Charitable Trust), and generous support from members of Ragamala’s Rasika Circle.

About Ragamala Dance Company
Ragamala Dance Company is the vision of award-winning mother/daughter artists Ranee Ramaswamy and Aparna Ramaswamy. Over the last four decades, Ranee and Aparna’s practice in the South Indian dance form of Bharatanatyam has shifted the trajectory of culturally rooted performing arts in the United States to create an exemplary company within the American dance landscape. Through both intimate solos and large-scale theatrical works for the stage, Ranee and Aparna empower the South Asian American experience. By engaging the dynamic tension between ancestral wisdom and creative freedom, they reveal the kindred relationship between ancient and contemporary that is urgently needed in today’s world.

ABOUT BRIC
BRIC is a leading arts and media institution anchored in Downtown Brooklyn whose work spans contemporary visual and performing arts, media, and civic action. For over forty years, BRIC has shaped Brooklyn’s cultural and media landscape by presenting and incubating artists, creators, students, and media makers. As a creative catalyst for their community, BRIC ignites learning in people of all ages and centralizes diverse voices that take risks and drive culture forward. BRIC builds Brooklyn’s creative future.