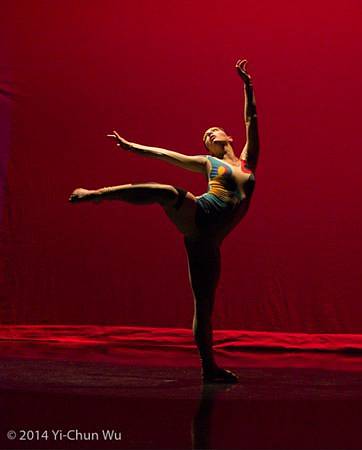 BodyStories: Teresa Fellion Dance presents The Mantises Are Flipping W.3 as part of the DANCE: Access series* at Danspace Project from May 21-23, 2015 at 8pm at St. Mark’s Church, 131 E. 10th Street, NYC. Tickets are $20 ($15 for Danspace members) and can be purchased on danspaceproject.org, by calling the Danspace Project box office at 866.811.4111, or by visiting the box office in person. For more information, please visit http://bodystoriesfellion.org.

Derived from Teresa Fellion’s original solo work, Mantises utilizes contrasting movement qualities, while creating polyrhythmic movement where the upper and lower body performs separate dynamics and rhythms. With Fellion’s direction, the company dancers are investigating themes including: the nature of opposites, “sanity versus insanity”, the effects of sound on the body both internally and externally, and the changing psychological states of several individuals in a thread of isolation. These have informed their ever-changing imaginative development process to cultivate new discoveries.

“The Mantises Are Flipping W.3 is a long-term contemporary dance project which has evolved during three separate, detailed stages of fresh development, exploring duality that creates a voyeuristic point of observation into idiosyncratic worlds and relationships among individuals,” said Teresa Fellion, Artistic Director of BodyStories: Teresa Fellion Dance. “World One premiered at ICA Boston and CPR-Center for Performance Research in 2013, exposing our sound and movement vocabularies, created to contain opposing qualities simultaneously. World Two premiered at Manhattan Movement and Arts Center and Bryant Park Summerstage in 2014, offering layers of cohesion to four distinct, rich environments. Through further movement and sound development, as well as extended spatial and interactive design research, in May 2015 we will premiere a new work, Mantis W.3, which will give the audience an immersive experience in the imaginative, playful, yet ‘unfortunately adult’ world of Mantises Are Flipping.”

“Bodystories: Teresa Fellion Dance have stepped bravely up to the mirror and refused to shy away from our most unpleasant characteristics, while unfailingly celebrating the potential for beauty within each of us. Through repeated movements, loving touches and some of the angriest dance I have ever seen women undertake on the stage, this group has created true magic.”