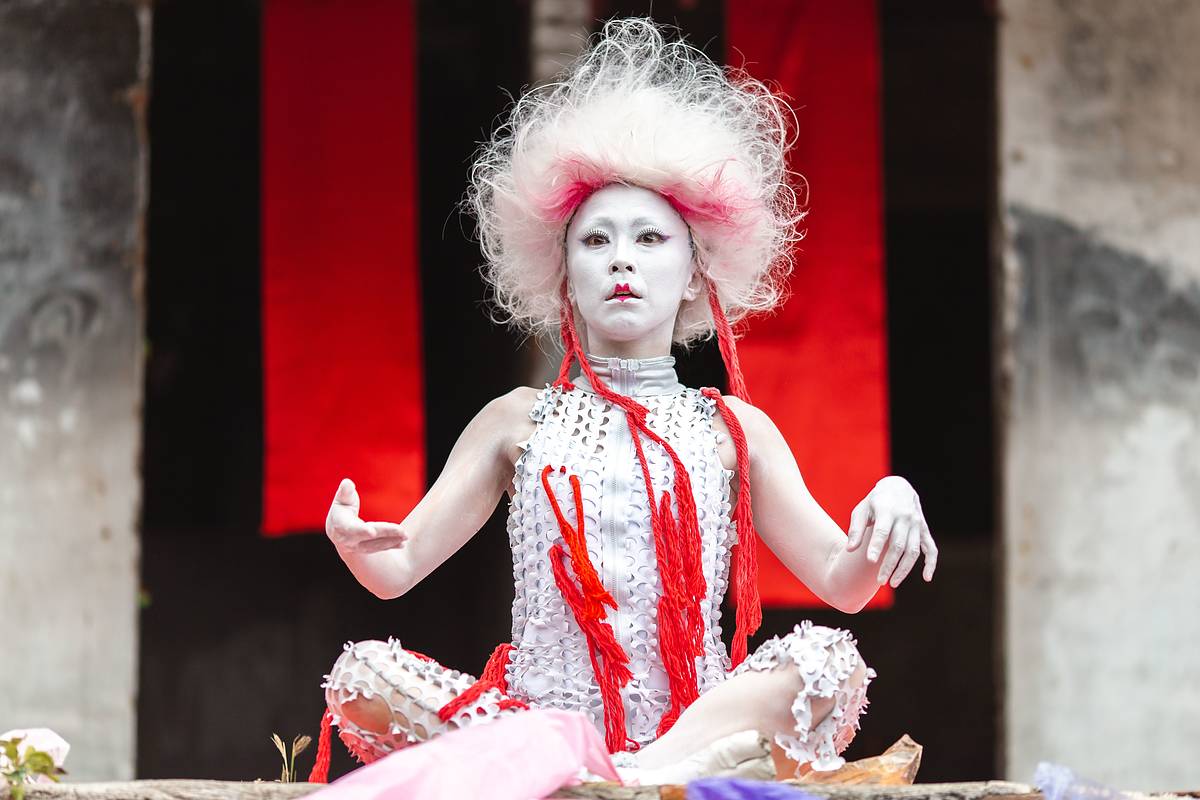 The Battery Dance Festival brings together 52 filmed performances including 28 premieres from 19 countries. Themed evenings include World and U.S. film Premieres from the Middle East, Africa, Europe, Japan and North America.  The centennial of the ratification of the 19th Amendment, which recognized the woman’s right to vote, serves as a focus for a program by women choreographers. Works that focus on Black voices in dance, the resiliency of New York City and the Festival itself and a special program celebrating India’s Independence Day round out the Festival.

Established in 1982, the Battery Dance Festival (BDF) is New York City’s longest-running free public dance festival and one of its most wide-ranging.  Its annual live audience of over 12,000 will be multiplied many times over with the ability to attract viewers from the entire world this year.

“Constricted by the pandemic and uncertainties over how to safeguard both performers and audience members, we’ve decided to go virtual in our 39th year.  In doing so, our curators have discovered a wealth of beautiful material on film, most of which has never been seen before by our audience. So let’s celebrate silver linings and look forward to nine nights of rare and inspiring dance across a world of genres,” said Battery Dance founder and Artistic Director Jonathan Hollander.

Ervs Works Dance kicks off the Festival with I-will I-Will I-WILLLLL, investigating the complications of one’s relationship to the self by choreographer Will Ervin. Festival favorite Jamal Jackson Dance Company presents grEeneR grASsEs exploring the impact of migration. Kafago Dance Ensemble, steeped in traditions from West Africa and the Caribbean, presents CROSSROADS, with the deity Eshu as its guardian.  D, founded by director Dorchell Haqq, presents the Company’s work tenderheaded…, examining the process of rediscovering ourselves.

Diverse dance-makers from Iraqi Kurdistan, Palestinian Territories, Iran and Lebanon challenge stereotypes and encourage the deepening of trust and mutual understanding through art. In the U.S. premiere of The Dérive, Tanin Torabi moves among the people in an old bazaar in Tehran where dance is prohibited.  The world premiere of Project TAG's A Call for Prayer encourages the making of peace with our own conflicted selves. Hoedy Saad, a choreographer and voguer from Lebanon performs TBD, a world premiere. Battery Dance remembers the life of Ayman Safiah, a 29-year-old Palestinian dance artist born in Galilee, who tragically died in May. A selection of films prepared by choreographer Samar Haddad King reveals the impact Ayman had on a generation of Palestinian and Israeli dancers as a choreographer, director, mentor, and role model.

Future Temple by Japanese choreographer Emiko Agatsuma imagines the changing perception of the soul from past to future. Commissioned by the Romanian Cultural Institute, Ana Maria Lucaciu and Razvan Stoian present Almost,a story of two echoing universes that aim to align; the air between two bodies resonate with what could have been. Sisters, an award-winning dance film choreographed by Emma Evelein, portrays three sisters growing up in a broken family, revealing their inner world and unbreakable relationship. In the U.S. premiere Trans-tánc Budapest by TranzDanz / cie. Gerzson Péter Kovács, young dancers repeat a sequence inspired by Hungarian folk dances as they traverse the emblematic sites of Budapest. Strikingly filmed on sand dunes in Greece, the U.S. premiere of Anasa is contributed by Odos Productions, the work of Swiss choreographer Maja Zimmerlin and French filmmaker Thomas Delord. Ludivine Large-Bessette's Drop Out Bodies questions the fatality of the human body and our individual and collective responsibilities in this complex time.

Battery Dance Festival honors female choreographers in a program co-curated by Catherine Tharin. Combative Echoes by Ashley Menestrina investigates the role of memory and transient energy in the human experience. Annalee Traylor’s
the nearness of you metaphorically depicts four vignettes universally connected through aspects of relationships. Inspired by the Persian tale of Shahrzad, Rosanna Gamson's Layla Means Night reveals our insatiable desire to be entertained. Set to Steve Reich’s Pulitzer-winning Double Sextet, Kathryn Posin adds a third sextet of dancers to the polyrhythmic interlocking musical network. Futorian Dance Theatre presents a world premiere suite with the theme of compassion, nurturance, and dedication. In Hamadryad with choreography by Jean Erdman, a dancer rehearses alone in a studio enchanting herself back into the forest as a wood nymph, while Isadora Duncan's Revolutionary, as danced by Lori Belilove, and Doris Humphrey’s
Quasi Waltz as danced by Meggi Sweeney Smith round out Tharin’s legacy suite.

African artists draw from their traditional dance, culture and communities in creating original contemporary works. Moving Into Dance Company performs
Road and Everlast, fusing African and Western contemporary movement, ritual and music. Thina, created by Phumlani Nyanga and performed by the dancers of Luthando Dance Academy, portrays a young South African family as they struggle to maintain harmony. Abdul Kinyenya's Twete attracted worldwide attention when shown on Battery Dance TV in May, earning a reprise in the Festival.

Toronto-based Kaeja d'Dance presents XDTO with 22 dancers improvising one-minute solos in an urban glade at the edge of Lake Ontario with the skyscrapers and harbor of Toronto in the background. National Ballet of Canada’s offers Gratitude, choreographed by the dancers of the company who perform on balconies and in homes, yards, woods, gardens and parks.  Cornfield Dance's Portal denotes the passageway from one state to another-agitation into peace and quotidian into sacred. Choreographed by David Dorfman, Imagine, If You Will…  is performed by Dancing Wheels, the first professional physically integrated dance company in America, uniting dancers with and without disabilities.  Mexico’s Delfos Danza presents Telempathies, a U.S. Broadcast premiere of an experimental work using dance on Zoom.

As our festival takes the virtual stage for the first time, we explore the past, present, and future of Battery Dance and the Festival. Based on Greek mythology, Battery Dance Company’s world premiere Icarus, choreographed by company member Razvan Stoian, reflects on hubris as our society’s demise. Partnering with artist/technologist Ellen Pearlman and Thoughtworks Arts, Art-a-Hack joins Battery Dance’s Stoian and Hussein Smko in collaboration with 25 international art hackers exploring the intersection between dance and cutting edge technologies. Curaçao-based dancer/choreographer Reuel Rogers, mentored by Battery dancer Sean Scantlebury and a highlighted performer in last year’s festival, presents his new work
Hero, a motivational piece about how to become your own personal hero.

Battery Dance Festival dedicates its final day to New York City. #NYTOUGH #ILOVENYC. The world premiere of Tom Gold Dance's Plan & Elevation, set to Caroline Shaw’s string quartet, imagines an encounter among four individuals on a summer day in a garden. hi are you like me choreographed by Dolly Sfeir is an ironic presentation of the finance world and its inhabitants. Pony Box Dance Theatre’s
No Man is an Island explores the feeling of isolation arising from the virus lockdown of 2020 as four dance artists of color reach out to one another in the cleared streets of NYC. Fractal Collective presents From the Streets to the Seats, with breakdance hitters around the globe from Amsterdam to the NYC subways in a documentary and performance story about hustle, hope & hierarchy. Accent Dance's Naranjo en Flor crafts an abstraction of the tango form, blending ballet and contemporary vocabularies set against a live performance of the most traditional song in the tango canon.

ABOUT BATTERY DANCE
Battery Dance created its outdoor festival in 1982 in lower Manhattan, the community where it was founded in 1976. As one of America’s leading cultural ambassadors, Battery Dance connects the world through dance. The Company pursues artistic excellence and social relevance by creating vibrant new works, performing on the world’s stages, presenting dance in public spaces, serving the field of dance and teaching people of all ages with special attention to the disadvantaged and areas of conflict. Battery Dance is committed to enhancing the cultural vibrancy of its home community in New York City, extending programming throughout the U.S., and building bridges worldwide through international cultural exchange with programs in 70 countries to date.  Faced with the curtailment of all of its live programs in March, the Company went online and invented Battery Dance TVwith hundreds of classes, performances and interviews broadcast across 135 countries, achieving over 400,000 views within just four months.  www.batterydance.org