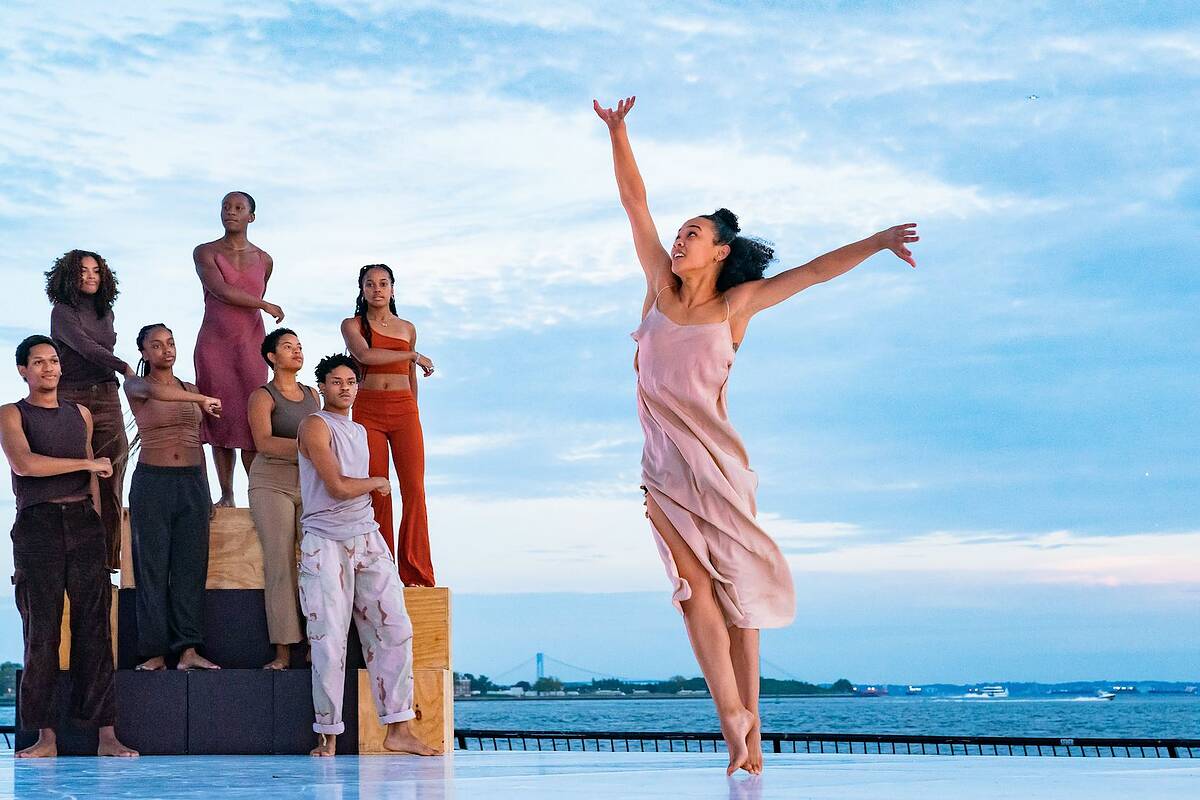 Battery Dance Festival, New York City’s longest-running free public dance festival, was established by Battery Dance as the Downtown Dance Festival in 1982. Pre-pandemic, it drew audiences of approximately 2,000 people each night in its iconic setting. The Festival went virtual in 2020, attracting 30,000 viewers across 206 countries. In 2021, it ran as a hybrid model with over 10,000 in-person and over 21,000 virtual audience members. This year, the Festival returns to welcome in-person and livestreamed audiences.

“When Super Storm Sandy flooded lower Manhattan eight years ago, Battery Park City Authority reached out a helping hand, providing a beautiful site for the Battery Dance Festival which we’ve all enjoyed every summer since 2013. With the prospect of rising seas in future, BPCA is enacting a pro-active resiliency plan, lifting Wagner Park up to 12 feet, making it inaccessible this summer. But fear not! BPCA has invited us to move to Rockefeller Park this summer where we’ll benefit from the large lawn and river-front views, as we bask in the glow of performances by local and international companies.” – Jonathan Hollander, President and Artistic Director of Battery Dance

Ballet Inc., Touche, - World Premiere
Set to Debussy and Brahms, “Touche” is a contemporary ballet that investigates the idea of the female and male emotive response to difficult decisions.

Ballet Nepantla, Let Down and Huasteca Suite
“Let Down” is the story of a lost love that confronts gender normative dancing, while providing representation for queer females in dance. “Huasteca Suite” is an excerpt of Ballet Nepantla’s “Valentina.”

Buglisi Dance Theatre, Threads
“Threads” takes inspiration from the Universal Declaration of Human Rights, as narrated by people from all over the world, beginning with Eleanor Roosevelt. Buglisi’s newest exploration also includes indigenous voices that expose the traumatic unraveling of our society. These human stories create intimately woven threads that make up the fabric of life.

Dancing Wheels Company, Imagine, If You Will…
Inspired by the current social and political climate in the United States filtered through the lens of those with disabilities, David Dorfman says of his work, “I often marvel at how much we as ‘able bodied’ dancers take for granted and at the same time, how much we as Americans take for granted.” Set to music by Liz de Lise, Omar Souleyman, and Wovenhand, Dorfman has attempted to let the audience imagine a life of differing physical or emotional abilities.

Demi Remick & Dancers, Sweet Nothings
“Sweet Nothings” is a tap dance work energized by genuine affection for the ones we love, illustrated with profound reverence for the masters of the dance form. In this work, the most nostalgic recollections are romanticized with help from the vintage melodies of the Golden Era.

Floyd McLean Jr., Cold - NYC Premiere
“Cold” explores the importance of holding one another up in a world that seems like it has its cards stacked against you. The individuals in this duet are revisiting earth from another realm, navigating prejudice, hate crimes, and so much more due to how you look or identify.

Gaudanse, nanibu - NYC Premiere
“nanibu” investigates what it means to be royalty through imagery and movement. The choreography uses bird-like movement along with the feelings attached to colors to create the idea of a queen.

Ntrinsik Movement, Kindred Spirit
“Kindred Spirit” is an excerpt of a multi-disciplinary production entitled “House of Love” that reflects our culture and heritage. The dancers pay homage to the ones that came before us and celebrate the cultural rhythms instilled deep within our souls.

Peridance Contemporary Dance Company, Just Above the Surface
Created as part of a residency program commissioned by Western Michigan University, this piece explores the electric connection of human interaction—the sensations that pull people together or apart. Conceptually rooted in Yin Yue’s FoCo technique, which fuses movement from both Chinese folk and contemporary dance, the work communicates non-traditional narratives atop a buzzing and complex musical undercurrent by Michel Banabila, Shifted, Machinefabriek, and Metamorphoses.

Tati Nuñez, Touch - Returned - World Premiere
“Touch - Returned” explores how physical touch can create both an internal and external presence in space around you, exposing both vulnerability and humility as the dancers experience one another.

Tina Croll + Company, Balkan Bacchanal
“Balkan Bacchanal” explores the intricate rhythms and moods found in the music from Bulgaria, Macedonia, and Romania. The dances are often rituals that range in mood from wild and playful, slow and stately, harsh and driven to gentle and almost trance-like.

Xing Dance Theater, Citizen
“Citizen” interrogates the labels we receive – foreigner, immigrant, gay, white, black, Asian, poor, old, young. Standing on the stage, after the dancers share their stories and expose their inner selves, what labels do you actually see?

AWA, As You Want, Luxembourg - U.S. Premiere
A duet created by Baptiste Hilbert and Catarina Barbosa as a reminder that all human beings come from the same place, although individual life experiences make each of us different characters.

Compagnie Virginie Brunelle, Les Corps Avalés, Canada - U.S. Premiere
A living fresco of today’s society amalgamating beauty and ugliness as they rub shoulders, “Les Corps Avalés” depicts these tired women and men who are sucked into a socio-political chaos, their arms hanging down in tears.

Dos Proposiciones Dance Theatre, Pacto de Fuga, Spain – U.S. Premiere
“Pacto de fuga” is the answer to the choreographer’s concern for exploring the coexistence between contemporary dance and urban landscape. The creation process was based on the three dancers’ research and immersion in a concrete public venue: a popular traditional square in Seville, Spain.

Julienne Doko, Lost Memories, Norway – U.S. Premiere
The Greek myth of Sisyphus is reinterpreted through Gbaya, the choreographer/dancer’s native Central African culture and language. She invites us to see and feel the connectivity between different arts and cultural backgrounds.

TeaTime Company, Stick-Stok, Netherlands – U.S. Premiere
“Stick-Stok” reveals the human desire for constant discovery and the tumbling effects this brings about . No matter how much we want time to pause, the technological era we live in continues to rapidly change and tumble.

ABOUT BATTERY DANCE
Battery Dance created its outdoor festival in 1982 as a way of engaging with its home community of lower Manhattan where it had been based since its founding in 1976. As one of America’s leading cultural ambassadors, Battery Dance connects the world through dance. The Company pursues artistic excellence and social relevance by creating vibrant new works, performing on the world’s stages, presenting dance in public spaces, serving the field of dance and teaching people of all ages with special attention to the disadvantaged and areas of conflict. Battery Dance is committed to enhancing the cultural vibrancy of its home community in New York City, extending programming throughout the U.S., and building bridges worldwide through international cultural exchange with programs in 70 countries to date. www.batterydance.org