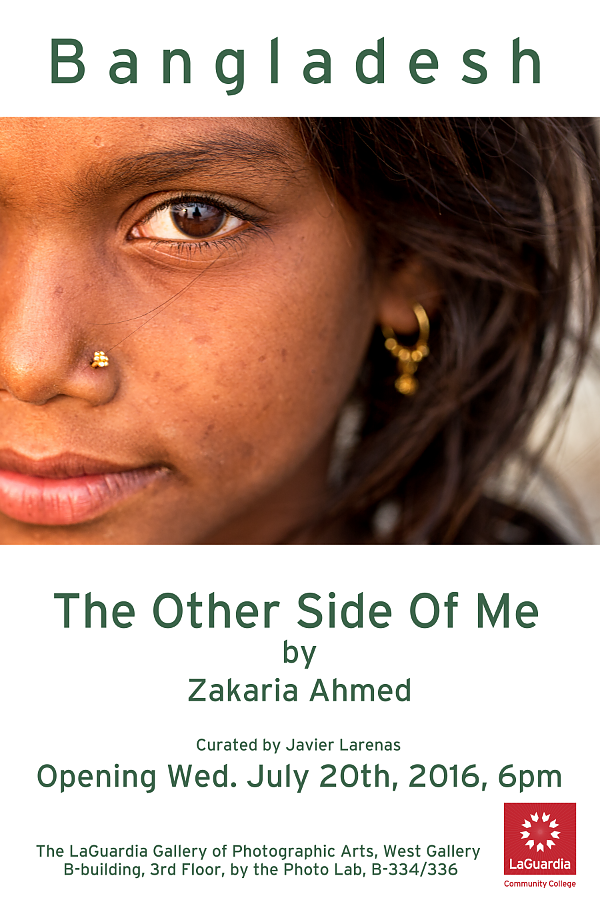 Bangladesh - The Other Side of Me

Zakaria “Zak” Ahmed, a graduate of LaGuardia Community College’s esteemed commercial photography program, who is now an employee there, is showcasing photos he took on a trip back to the country where he was born, Bangladesh.

Featured in a gallery on the third floor of LaGuardia’s “B” Bldg.—30-20 Thomson Ave.—the exhibit is free and open to the public. Access is available 9am-9pm Monday through Thursday until August, and then open Friday as well through the end of September.

Artist Statement: “This photographic series is my portrayal of Bangladesh, a country that is defined by its lands, rivers, poverty and class. The country sits atop the world’s largest river delta, close to sea level, at the juncture of several active tectonic plates, which cause frequent earthquakes, with a secondary risk of tsunamis and severe flooding in a quake’s aftermath, which inherently has subtropical monsoon weather patterns that causes wide seasonal variations in rainfall, due to high humidity and temperatures. In addition, because of the country’s booming population and mass migration, this has contributed to both poverty and a water crisis. Since I came to United States in 2004, I have strongly felt that this is a story that needs to be told. Finally, after 11 years, I had the opportunity to go back and document people’s lives. While photographing this project, it took on an unexpected level of significance to me, coming to the realization of just how many have lost their homes and all of their belongings due to floods. As I was alongside of them, it drew me closer to them, by both actually facing and listening to their life’s struggles for survival. It grounded me to my roots, my days as a child, moments of self-reflection, and it inspired me even more to visually capture “The Other Side of Me”. These photographs closely portray a community on the fringes—environmentally, geographically and economically—yet whose ‘fringed’ presence became more evident, when their vulnerability became more than notional—whose children will one day inherit this world.—Zakaria “Zak” Ahmed