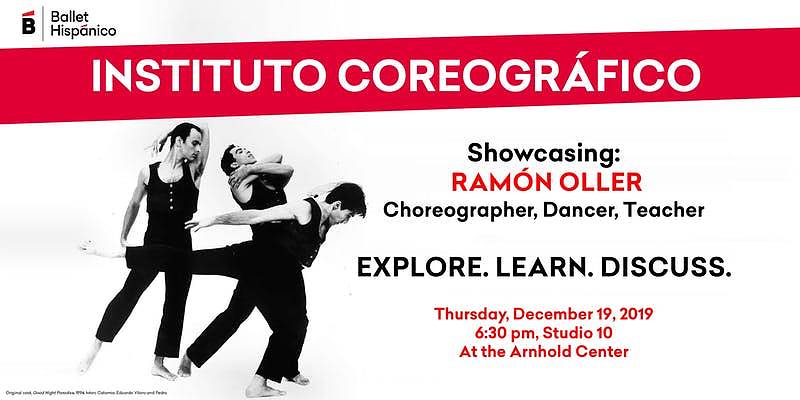 Ballet Hispánico announces Instituto Coreográfico on Thursday, December 19, 2019 at 6:30pm at Studio 10 at the Arnhold Center at Ballet Hispánico, 167 West 89th Street, New York, NY 10024. Get a free, inside look a the reconstruction of Good Night Paradise from Choreographer, Ramón Oller which will return to The Joyce Theater in April 2020 for Ballet Hispanico’s 50th Anniversary New York Season. Complementary wine and beverages will be served. Reserve your seat at https://www.eventbrite.com/e/instituto-coreografico-showcasing-ramon-oller-tickets-83703394105.

Instituto Coreográfico allows the audience to respond, reflect, and enter into cultural dialogue with the artists about dance and culture. With this invaluable platform, Ballet Hispánico continues to give a voice to artists and opens access to the dance-making process for all audiences.

Ramón Oller
Born in Esparraguera (Barcelona) in 1962, he studied at the Theatre Institute of the Barcelona regional government, debuting with the Gelabert-Azzopardi Company. His first choreography, Dos Dies i Mig won second prize at the ‘Tórtola Valencia’ Choreography Competition in 1984, He founded the Metros Company in 1985 where he premièred most of his work. He choreographed Naranjas y Limones alongside Jean-Christophe Maillot for the National Choreography Centre in Tours. He has served as choreographer for other companies such as the Spanish National Dance Company of the National Ballet of Spain. He won the best dance show award from the New York Times for his work Good Night Paradise.

Ballet Hispánico, the premier Latino dance organization in the United States, has been bringing individuals and communities together to celebrate and explore Latino cultures through dance for nearly 50 years. Whether dancing on stage, in school, or in the street, Ballet Hispánico creates a space where few institutions are breaking ground. The organization’s founder, National Medal of Arts recipient Tina Ramirez, sought to give voice to the Hispanic experience and break through stereotypes. Today, Ballet Hispánico is led by Eduardo Vilaro, an acclaimed choreographer and former member of the Company, whose vision of social equity, cultural identity and quality arts education for all drives its programs. Ballet Hispánico, a role model in and for the Latino community, is inspiring creativity and social awareness in our neighborhoods and across the country by providing access to arts education.