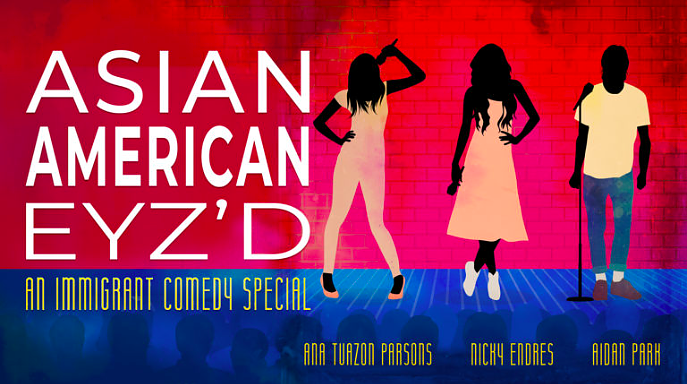 Asian-American Eyz’d: An Immigrant Comedy Special– an illuminating, heartfelt, and edgy show by a trio of stand-up comics – will join the lineup on the Reel Women’s Network in May 2022!

Asian-American Eyz’d: An Immigrant Comedy Special– an illuminating, heartfelt, and edgy show by a trio of stand-up comics – will join the lineup on the Reel Women’s Network starting in May 2022!
Directed by Felipe Figueroa (Medium), the special brings three Asian American immigrant comics together for a revealing one-night performance, each sharing their personal journey to America as immigrants. Ana Tuazon Parsons (Filipino) was smuggled from the Philippines by her biological Mom, becoming her hope for The American Dream. Nicky Endres (Korean, Trans) was adopted by a white family and sent here with a Korean cookbook; Aidan Park (Korean, Queer) learned English by watching the movie Sister Act. He was diagnosed with HIV as a homeless teenager and fought his way to success.

Ana Tuazon Parsons is an actress, comedian and writer/producer known for appearances in Adam Ruins Everything (TruTV) The Affair and Dexter (Showtime). She’s worked with Philip Seymour Hoffman’s Labyrinth Theatre Company at New York’s Public Theatre and appeared at numerous theaters around the country performing both contemporary and classical works. Previously seen in Broadway houses on the international tour of Sherlock Holmes with David Arquette. As a stand-up comic, writer and multi - hyphenate Ana has been a Main Stage regular and performer; stages include the Comedy Store in Los Angeles, Ice House Pasadena, and Gotham Comedy in New York. Her semi–autobiographical pilot, The Asian That Didn’t, a finalist for Sundance Episodic Lab, Showtime’s Tony Cox Award, and The Orchard Project.

Mx. Nicky Endres (they/she) has long defied convention. An adopted Asian-American Non-Binary Transfeminine Queer actor, comic, voice artist, and audiobook narrator, they have long challenged cultural categories to forge their own way. Nicky has enjoyed a wide variety of roles in TV, film, and theatre — recurring on One Day at a Time (Netflix; PopTV) and with notable guest stars in The Dropout (Hulu) and NCIS: Los Angeles (CBS). Nicky also provides the English-language voice for the starring role of Spanish Trans icon Christina Ortiz Rodriguez in Veneno, the limited series about her life (HBO Max).

Aidan Park is a comedian, best-selling author, and international keynote speaker known for Totally Street Fighter! (2009), Trauma (2009) and Jeremy Lin, the Unauthorized Musical: A Journey to Linsanity (2014). Aidan work as a comedian has also been seen on Comedy Central, Tru TV, and his comedy special The Art of Being Gay and Aidan’s book “The Art of Being Yay” in which he advocates for joyful living became a best seller in 2021 and has a foreword by LGBT icon and comedy legend Margaret Cho. Aidan also uses his comedy to promote wellness and joyful living to organizations such as American Cancer Society, Special Olympics, AIDS Healthcare Foundation, Soaring Spirits International and more.

This powerful, poignant, unique trio take the audience on a journey between laughter and heartbreak in a contemporary standup mash of (Ali Won’gs) Baby Cobra meets (Hannah Gadsby’s) Nannette.

Bringing a fresh perspective to the world of streaming, the Reel Women’s Network advances the unique voice of Women Filmmakers and Creators to Viewers Worldwide. Its team brings together years of production and content management experience, as well as thousands of viewers and subscribers.

“Asian American Eyz’d: An Immigrant Comedy Special” will be available for rental and/or purchase. Visit www.reelwomensnetwork.com.