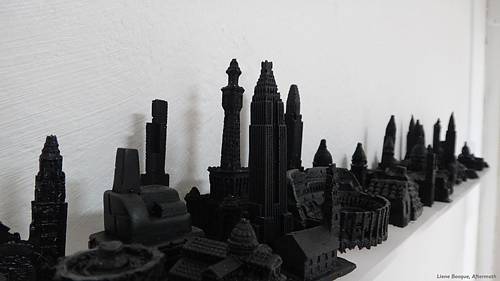 The New York Art Residency and Studios (NARS) Foundation is delighted to announce the opening of F_ll in the bl_nk, a group exhibition curated by Shlmoit Dror, winner of the 2013 annual NARS Emerging Curator Program Open Call.

The exhibition contains artworks whose visual and conceptual gaps evoke opposing elements of presence and absence. Fragmentation, disassembled forms and (in)visibility are core principles that the artists in the show convey through their creative process. Fragments shown in the artworks reference an experience from the past, a historical moment, a geographic location, a voyage or a situation. The absent section in the work, the “negative” space (that is the void which in fact references the presence of something that was there) becomes the main visual experience. The fragments and other elements that used to be part of a whole (which is now absent) have new meanings (detached from their origin) and hence are visibly dominant. The negative and empty spaces challenge the viewers’ expectations. Using our visual memory and archive, we find links to fill in these gaps, which are contingent on our past experiences and pre-conceived notions. The remnants existing in these works are linked to sources that cannot be retrieved, and as a result, these traces reclaim the original contexts (the source), and become the origin themselves.

Revealing only fractions of a structure, image or object, these oeuvres compellingly raise issues of memory, loss, destruction, disassembly, emptiness, temporality and infinity. Consequently, these works also create an interesting tension between the invisible and visible as well as between the corporeal and the cerebral. They invite us to consider which we are more likely to notice, things that are present or absent?

The idea of displacement and traces from the past (origin) comes through in many of the artworks in the show. These traces, which serve as evidence for something that is absent, become present. In other words, finding “presence in absence” means that the absence presents something that is not there, and as a result, that great abyss (the absence) becomes the prominent element, and therefore is still present. The artists in the show Keren Benbenisty, Liene Bosquê, Paul Clay, Ellie Krakow, Ann Oren and Lindsay Packer incorporate text, found objects and popular culture imagery from film and magazines, emphasizing the simultaneous encounters of absence and presence, fraction and whole, as well as reality and illusion. The works in the exhibition are both two and three-dimensional and include video, works on paper, sculpture and installation.