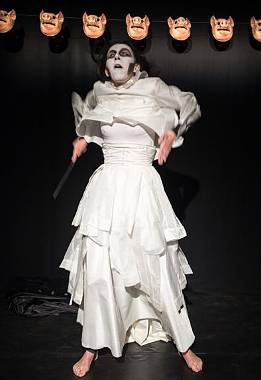 the New York Premiere of

The word “Eclipse” is derived from the ancient Greek noun ἔκλειψις (ékleipsis), meaning “abandonment,“ “downfall,” or “the darkening of a heavenly body” which in turn stems from the verb ἐκλείπω (ekleípō) which means “to abandon,” “to darken,” or “to cease to exist.” Butoh is likewise the “Dance of Darkness” where performers first appear human, then as ghosts. BUTOH BEETHOVEN: ECLIPSE (Admiring Tatsumi Hijikata), is a solo piece that illuminates the darkness of Butoh with the addition of cutting edge lighting technologies such as the futuristic creations of European designer Tilen Sepič and fiber optic costume by the French company LumiGram. After touring this show for the past two years and receiving four stars at the Edinburgh Fringe Festival and critical acclaim in the United States, Vangeline shines a new light on Butoh and will transport audiences.