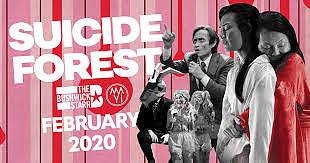 Returning by popular demand, following a sold-out run at The Bushwick Starr, Haruna Lee’s Suicide Forest is a bilingual nightmare play excavating the Japanese American consciousness and its intimate relationship with sex, suicide, and identity.

In 1990’s Japan, a teenage girl grapples with her sexuality in a male-defined society as a salaryman desperately tries to escape his masochistic psyche. Both are clawing for their self-worth. When their journeys collide, they expose their darkest desires fueled by shame as they now confront life and death with the notorious Suicide Forest looming over their imagination. Performed by a Japanese heritage cast, Suicide Forest breaks through the silence and submissiveness often associated with Japanese and Asian American identity, examining the role of community and the struggles of emotional, psychic and social suicide through the playwright’s lived stories.