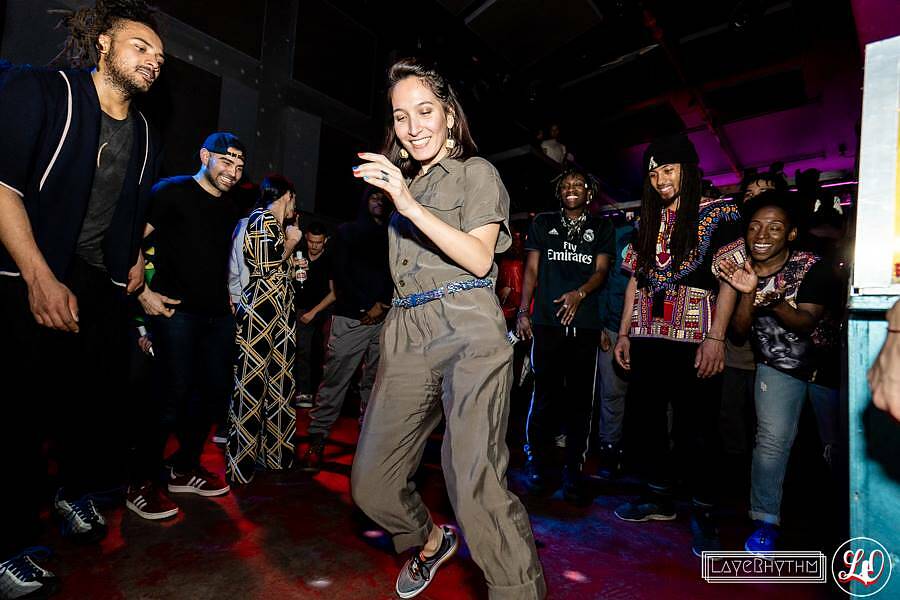 LayeRhythm - A Jam Session of Music and Dance

[LayeRhythm is a] brew of partying and performing that unfolds as a series of interactive sessions in which suggestions from the crowd beget songs and steps. Imagine an improv comedy show where dancing, not laughs, is the currency. Then imagine a musicians’ jam session where the band is compelled to keep the dancers’ pace instead of the other way around. […] [W]hat’s distinct about LayeRhythm is the way it bridges the two groups with crowd participation" (The New York Times).

Since 2015, LayeRhythm (LR), led by Founder/Artistic Director Mai Lê Hô, has offered NYC interactive, improvisational street/club music and dance jam sessions at Meridian 23 and Nublu. In 2018, The LayeRhythm Experiment (TLE) was formed as a collective with the addition of audio/visual theatrical elements and some choreography on a stage. Composed of 4 dancers, 3 musicians, 2 emcees, the collective performed their first work “It Takes Two” at 92Y, Jacob’s Pillow, and Purdue U (online). LR incorporated as a nonprofit in 2020. In 2021, TLE was invited to Bridge Street Theater for a 2-wk residency to start production of SWITCH. TLE was selected by CUNY Dance Initiative to partner w/ Brooklyn College for the Performing Arts for a residency (2021-2022). LR has partnered w/ Hook Arts Media, Rolling Stone, Teatro Yerbabruja, Queens County Farm Museum, Downtown Brooklyn Partnership, PotaY.