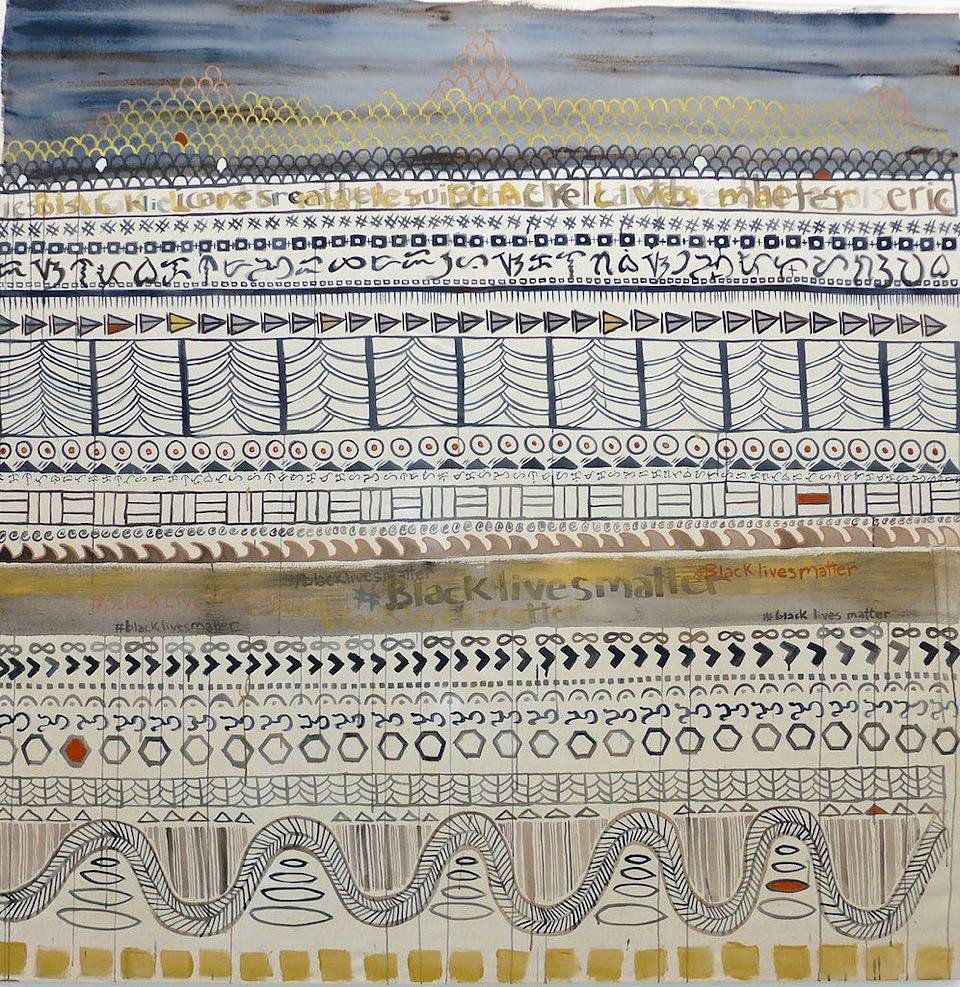 Isabel Manalo is an interdisciplinary visual artist whose work addresses ideas of power and identity as defined by race, ethnicity, geography and class. Combining photography with drawing, painting, sewing and writing, her work embraces visual clues and coding.

Manalo’s recent projects include a suite of paintings inspired by traditional Filipino tattoos. Relating to her Filipino heritage as well as her global perspective, these works incorporate imagery of pre-colonial Filipino script and indigenous tattooing, along with her own symbols and icons from contemporary culture.

Manalo’s latest works respond to trends in social media surrounding potent issues such as racially charged police violence in the United States and the refugee crisis in Syria. The exhibition includes work from these series, as well as a new large stitched wall piece she is creating specifically for the Zuccaire Gallery’s expansive space.

Isabel Manalo has shown her work internationally since 1999, including solo and group shows in New York, Washington DC, Orlando, Baltimore, Chicago, Los Angeles, San Francisco, Seattle, Philadelphia and Berlin. Her work is a part of numerous public and private collections including the National Academy of Sciences in Washington, DC, and the permanent collections of the US Embassies in Bulgaria, Kazakhstan and Nepal. She was featured in New American Paintings and was awarded Fellowships at the Virginia Center for the Creative Arts.

Manalo received her MFA in Painting from Yale University, a BFA from the School of the Art Institute of Chicago and a BA from the University of Wisconsin-Madison. She is rep­re­sented by Addi­son Rip­ley Fine Art in Wash­ing­ton D.C. and is included in the Drawing Center and White Columns curated artist registries. She taught at Amer­i­can University’s Depart­ment of Art and was on the Board of Direc­tors and the Visual Arts Com­mit­tee at Dis­trict of Colum­bia Arts Cen­ter and recently served as a Vis­it­ing Artist and Cura­tor at Takt Inter­na­tional Artist Res­i­dency in Berlin. Manalo is the Found­ing Direc­tor and Edi­tor of TSV (The Studio Visit).