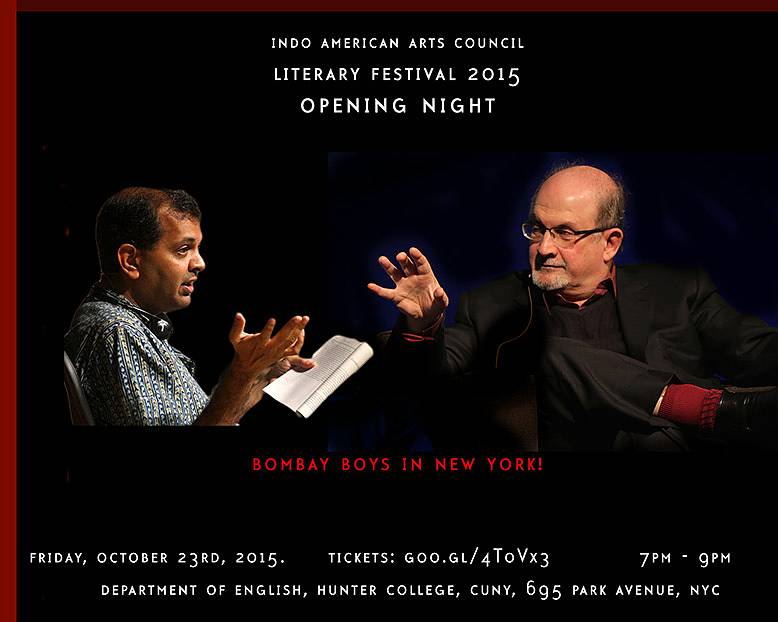 Friday, October 23, 2015
7 – 9PM
Sir Salman Rushdie is the author of twelve novels: Grimus, Midnight’s Children(which was awarded the Booker Prize in 1981), Shame, The Satanic Verses, Haroun and the Sea of Stories, The Moor’s Last Sigh, The Ground Beneath Her Feet, Fury, Shalimar the Clown and The Enchantress of Florence, Luka and the Fire of Life and his latest book Two Years, Eight Months & Twenty Eight Days. A Fellow of the British Royal Society of Literature, Sir Salman Rushdie has received, among other honours, the Whitbread Prize for Best Novel (twice), the Writers’ Guild Award, the James Tait Black Prize, the European Union’s Aristeion Prize for Literature, Author of the Year Prizes in both Britain and Germany, the French Prix du Meilleur Livre Étranger, the Budapest Grand Prize for Literature, the Premio Grinzane Cavour in Italy, the Crossword Book Award in India, the Austrian State Prize for European Literature, the London International Writers’ Award, the James Joyce award of University College Dublin, the St Louis Literary Prize, the Carl Sandburg Prize of the Chicago Public Library, and a U.S. National Arts Award. He holds honorary doctorates and fellowships at six European and six American universities, is an Honorary Professor in the Humanities at M.I.T, and University Distinguished Professor at Emory University.

Suketu Mehta is the New York-based author of ‘Maximum City: Bombay Lost and Found,’ which won the Kiriyama Prize and the Hutch Crossword Award, and was a finalist for the 2005 Pulitzer Prize, the Lettre Ulysses Prize, the BBC4 Samuel Johnson Prize, and the Guardian First Book Award. He has won the Whiting Writers’ Award, the O. Henry Prize, and a New York Foundation for the Arts Fellowship for his fiction. Mehta’s work has been published in The New Yorker, The New York Times Magazine, National Geographic, Granta, Harper’s Magazine, Time, and Newsweek, and has been featured on NPR’s ‘Fresh Air’ and ‘All Things Considered.’ Mehta is an Associate Professor of Journalism at New York University. He is currently working on a nonfiction book about immigrants in contemporary New York, for which he was awarded a 2007 Guggenheim fellowship. He has also written original screenplays for films, including ‘New York, I Love You.’ Mehta was born in Calcutta and raised in Bombay and New York. He is a graduate of New York University and the Iowa Writers’ Workshop.