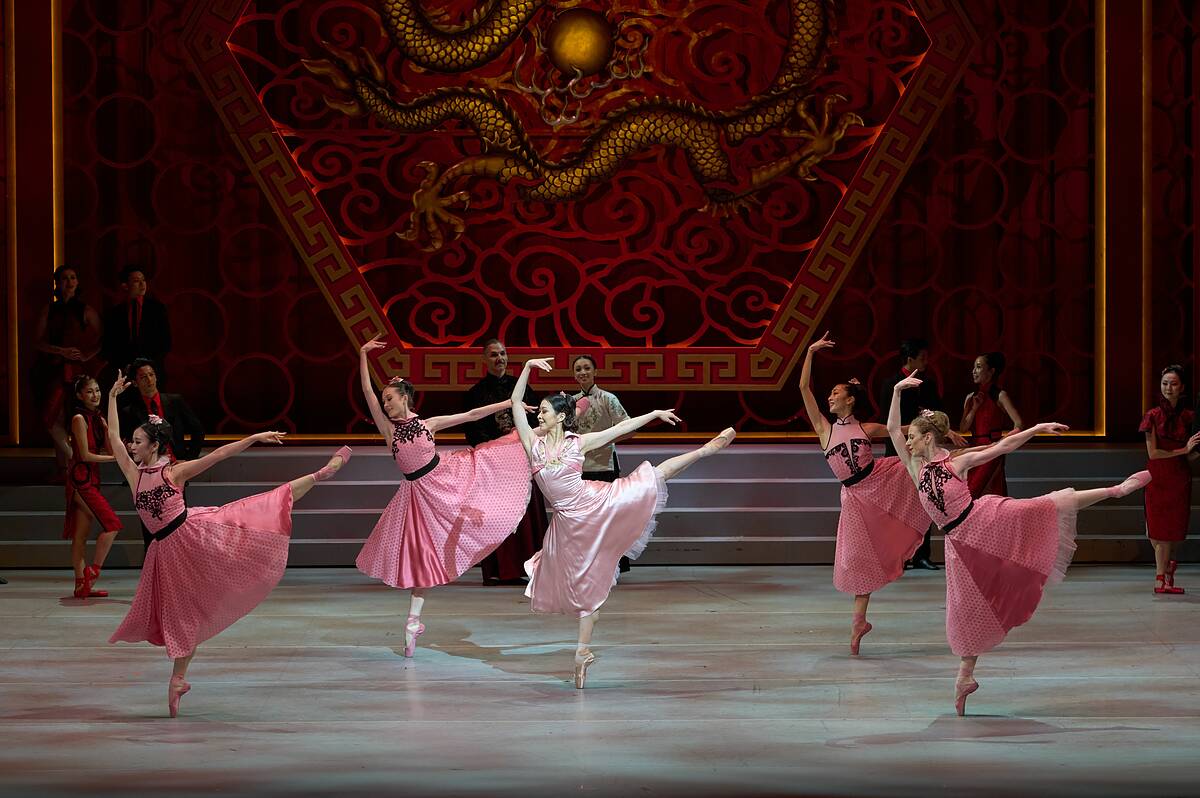 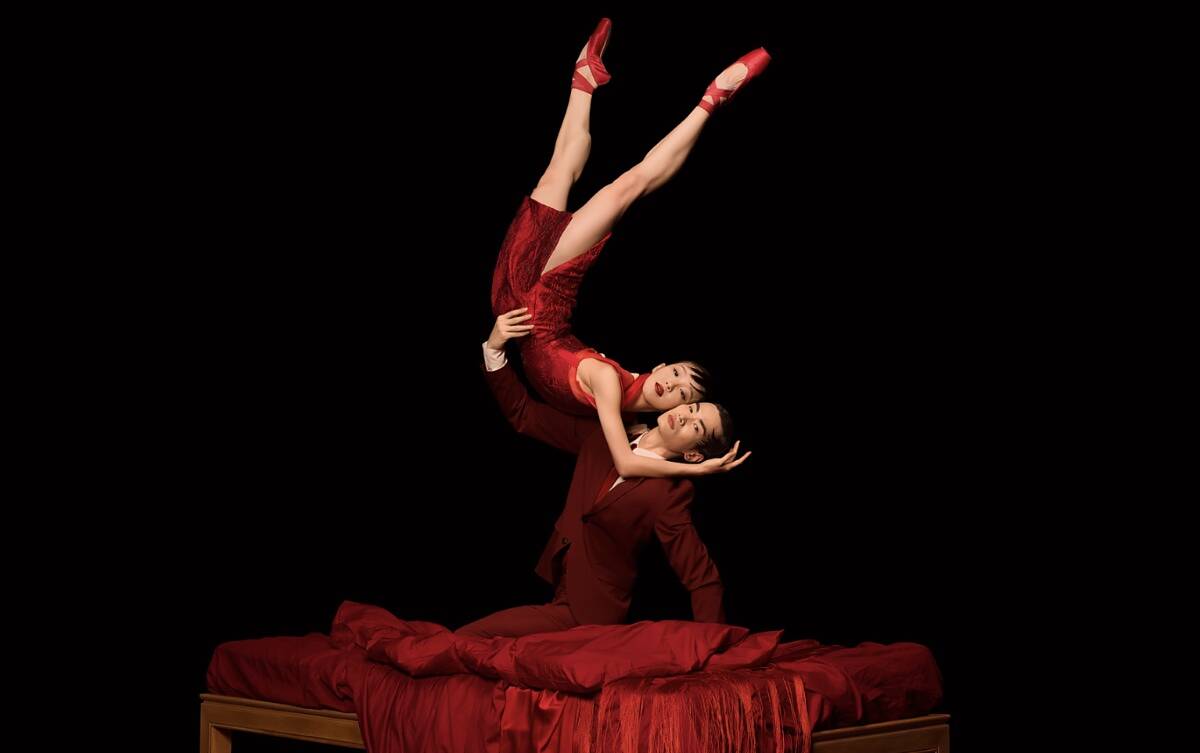 Hong Kong Ballet (HKB) presents the U.S. Premiere of Romeo + Juliet on Friday, January 13 at 8pm and Saturday, January 14 at 2pm at New York City Center, 131 W. 55th Street (between Sixth and Seventh Avenues) NYC. Tickets begin at $35 and can be purchased online at nycitycenter.org, by phone at (212) 581-1212, or in person at the New York City Center Box Office.

Ancient grudges between triad families. Passion and tragedy. The iconic balcony scene. Set in Hong Kong in the turbulent 1960s, Shakespeare’s timeless tale of star-crossed lovers is given a fresh and thought-provoking retelling in Septime Webre’s new Romeo + Juliet. Juliet’s father is an unrelenting Shanghainese tycoon who is determined to marry his only daughter off to a wealthy gweilo (Caucasian), and Webre’s original choreography seamlessly incorporates intense street battles rendered in traditional Hong Kong-style kung fu. Accompanied by Prokofiev’s dramatic score, retro Hong Kong is vividly brought to life in the epic love story’s captivating dancing, complex drama and sumptuous cheongsams. This brilliantly imagined adaptation is especially relevant for contemporary audiences as it fuses dance and drama against a backdrop of a world in flux.

“Transposing the action from medieval Italy to 1960s Hong Kong is an ingenious idea which serves the dual purpose of appealing to the local audience while offering a uniquely Hong Kong product for international tours. Visually the production is stunning." — South China Morning Post

One of Asia’s premier ballet companies, Hong Kong Ballet (HKB) is internationally recognized as a world-class institution which represents Hong Kong’s unique character. Since its inception in 1979, HKB has evolved into a vibrant performing arts organization with a dynamic repertoire, forward-thinking community engagement initiatives and an emphasis on excellence. Septime Webre joined HKB as its Artistic Director in July 2017.

With almost 50 tours to 11 countries, HKB most recently toured Europe, Mainland China and the US, at Jacob’s Pillow Dance Festival and in New York at the Joyce Theatre and the renowned Fall for Dance Festival. In addition to its performances on stage at home and abroad, HKB maintains a full schedule of community engagement initiatives throughout Hong Kong to ensure the art of ballet is accessible to all. Since its debut in 2020, the HKBALLET@HOME online channel has garnered over 2 million views, connecting with ballet lovers across the globe.

Born in Liaoning, China, Ye Feifei trained at Xun Yan Ballet School in Shenyang and Goh Ballet Academy in Canada. She joined Hong Kong Ballet as a Corps de Ballet member in 2006, was named Coryphée in 2009 and became Soloist in 2010. She left the Company in 2014 and returned as a Principal Dancer in 2016.

Taras Domitro was born and raised in Havana, Cuba. Former Principal Dancer with National Ballet of Cuba and San Francisco Ballet. He trained at Alejo Carpentier School and the National Ballet School in Havana.

Mr. Domitro was nominated for best male dancer at the 2013 Benois de la Danse. He also won the 2008 Gold Medal at the World Ballet Competition in Orlando, Florida, the Grand Prix at Peru’s International Ballet Festival in 2003, and in 2000, 1st Prize and the Revelation Award at International Ballet Competition and Ballet Academies Festival in Havana, Cuba. At age 20, he became a Principal Dancer with the National Ballet of Cuba. He built an incredible career sharing the stage with renowned dancers such as Italian Prima Ballerina Carla Fracci. Later he continued acquiring an extensive and versatile repertoire at San Francisco Ballet. Domitro’s major roles as a principal dancer include Albrecht in Tomasson’s & Alonso’s "Giselle,” Snow King and Nutcracker Prince in Thomasson’s “Nutcracker,” Prince & Sugar Plum Cavalier in Alonso’s “Nutcracker,” Mercutio in Tomasson’s “Romeo and Juliet,” Romeo & Mercutio in Alonso’s “Shakespeare & the Masks,” Prince Siegfried in Tomasson’s “Swan Lake,” Basilio in Tomasson’s/Possokhov’s & Alonso’s “Don Quixote,” Franz in Balanchine’s & Alonso’s “Coppelia,” Lensky in Cranko’s “Onegin,” Benjamin in Wheeldon’s “Cinderella,” Prince in Consuegra’s “Cinderella,” Solor in Makarova’s “Kingdom of the Shades” from “La Bayadere,"The Creature in Scarlett’s "Frankenstein,” Brown in Robbins’ “Dances at a Gathering.” In addition, he created the role of Giovanni and The Swimmer, respectively, in Possokhov’s Francesca da Rimini and Swimmer.

Cheng’s notable principal roles include Odette/Odile in Christopher Stowell’s and Kevin Irving's Swan Lake, and she was the first Chinese dancer to perform the role of Teresina in August Bournonville’s full-length Napoli. Additionally, she has performed almost all the lead roles in classical ballets like The Sleeping Beauty, The Nutcracker, Giselle, Cinderella, Don Quixote, Romeo and Juliet, La Bayadere and ALICE (in wonderland) and has danced leading and original roles created by world class choreographers, including George Balanchine, William Forsythe, Nacho Duato, Jiří Kylián, Édouard Lock, Nicolo Fonte, Trey McIntyre and Val Caniparoli. With La La La Human Steps, she toured 20 countries across Europe, Asia and North America. Cheng also guest performed with Barak Ballet and HKB and in the International Ballet Gala IX with Ballett Dortmund in 2009.

Cheng is a guest faculty member of Guangzhou Arts School and the School of Oregon Ballet Theatre. In 2015, she co-founded Oregon International Ballet Academy with her husband and served as the Artistic Director, overseeing ballet education programs and full-length productions.

During Webre’s tenure at The Washington Ballet, the institution’s budget grew by 500%, and it enjoyed unprecedented advances in the scope and quality of its work on stage, in the size and reach of its professional school, and in the development of several far-reaching community engagement programmes, which he founded. Webre launched an array of artistic initiatives including The American Experience, which developed great works of literature into full-length ballets, including The Great Gatsby and Hemingway’s The Sun Also Rises among others.

As a dancer, Webre was featured in solo and principal roles from the classical repertoire as well as in contemporary works by choreographers such as Twyla Tharp, Paul Taylor and Merce Cunningham. He has served on the juries of a number of international ballet competitions, including those in Varna, Bulgaria, Istanbul, Cape Town, New York, Seoul, and elsewhere. He has served on the board of Dance/USA and his work has received numerous honors, grants and awards. He holds a degree in History/Pre-Law from the University of Texas at Austin, and is the seventh son in a large, boisterous Cuban American family.

After 14 years in the West, Sergei Prokofiev returned to Soviet Russia and composed his first full-length ballet score, Romeo and Juliet, commissioned by Serge Diaghilev. His score has a wonderful lyricism depicting Juliet’s innocence and Romeo and Juliet’s tender love for each other. A Czech company first staged the ballet, followed by the Kirov in 1940, and in 1946, the Bolshoi staged it a decade after Prokofiev had finished it. There were those who wanted a happy ending, so Prokofiev had to fight to retain Shakespeare’s tragic ending. Romeo and Juliet is now one of the most popular ballets today.

Mandy Tam has designed costumes for more than 80 productions in Hong Kong, Beijing, Shanghai, Guangzhou, Shenzhen, Macao, Taiwan, Berlin, Singapore and other cities in North America, encompassing Chinese and Western opera, dance, drama, musical and physical theatre. In 2004 and 2015 she won twice the “Best Costume Award” from the Hong Kong Federation of Drama Societies. In 2008, she was awarded the Lee Hysan Foundation Fellowship of the Asian Cultural Council.

One of the most prominent set and costume designers in Hong Kong, Ricky Chan is the Head of Theatre Design in The Hong Kong Academy for Performing Arts. Chan has designed for more than 150 productions of various genres, including opera, Chinese opera, Chinese dance, contemporary dance and drama, winning much critical acclaims. His most representative works include the award-winning Hong Kong Repertory Theatre’s Dr Faustus and the large-scale Cantonese opera production Shade of Butterfly and Red Pear Blossom. He has worked extensively in the theatre, commercial fields and interior design and actively promoted theatre arts education and given talks on set and costume design. He was the chairman of Hong Kong Association of Theatre Technicians and Scenographers from 2008 to 2012.

Award-winning playwright, director and educator Yan Pat To is Artistic Director of Reframe Theatre. His works have been performed in Berlin, London, Munich, New York, Taipei, Mannheim, Seoul, Montreal and Hong Kong. His play A Concise History of Future China was the first ethnic Chinese play ever selected by Berliner Festspiele Theatertreffen Stuckemarkt and premiered at the 2016 Hong Kong New Vision Arts Festival. Yan is currently Lecturer (Dramaturgy) at The Hong Kong Academy for Performing Arts and Chairman of the Literary Art committee for Hong Kong Arts Development Council.

NEW YORK CITY CENTER has played a defining role in the cultural life of the city since 1943. The distinctive Neo-Moorish building was founded by Mayor Fiorello La Guardia as Manhattan’s first performing arts center with the mission of making the best in theater, dance, and music accessible to all audiences. This commitment continues today through celebrated dance and musical theater series like the Fall for Dance Festival and the Tony-honored Encores! series, as well as new dance series Artists at the Center and the City Center Dance Festival. Dedicated to a culture built on the principles of diversity, equity, and inclusion, City Center welcomes more than 300,000 annual visitors to experience internationally acclaimed artists on the same stage where legends like George Balanchine, Leonard Bernstein, Barbara Cook, José Ferrer, Martha Graham, and Paul Robeson made their mark. Home to a roster of renowned national and international companies including Alvin Ailey American Dance Theater (City Center’s Principal Dance Company) and Manhattan Theatre Club, City Center’s dynamic programming, art exhibitions, and studio events are complemented by education and community engagement programs that bring the performing arts to thousands of New York City students, teachers, and families every year, in all five boroughs. NYCityCenter.org