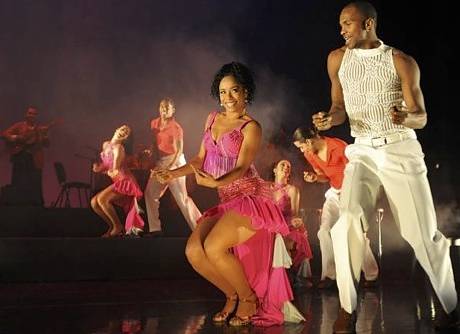 Havana Rakatan is a high-energy slice of Havana culture that charts the evolution of Cuban music and dance over the country’s 500-year history, from

the West African rhythms brought by slaves beginning in the mid-16th century, to the jazz, mambo and bolero of the 1940s, the rumba and cha-cha of the 1970s, and the salsa and son of modern-day Havana. Today’s son music, a combination of elements of Spanish guitar and song with African rhythms and percussion, is the heart of modern music and dance.

Ballet Rakatan is one of Cuba’s most successful cultural exports. The company was founded by dancer- turned-choreographer Nilda Guerra in 2001, when she was just 24. Havana Rakatan made its hugely successful debut in 2007 at the Peacock Theatre in London and has since toured all over the world. Nilda Guerra directs a versatile company of dancers, most of whom are graduates of the renowned Escuela Nacional de Arte de la Habana, which combines contemporary dance training with Cuban dance and Latin styles.