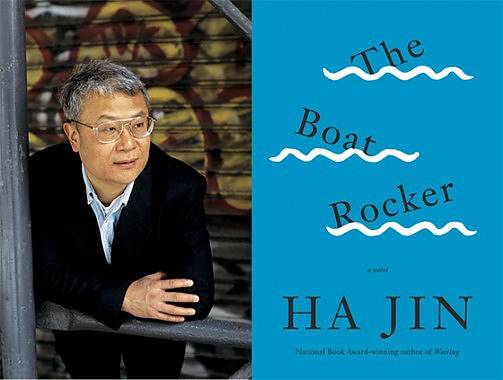 Ha Jin will discuss his experience as a Chinese American novelist, writing in English (his second language), and his new book, in a conversation with Orville Schell, Arthur Ross Director of the Asia Society Center on U.S.-China Relations. He will also share his reflections on China from the vantage point of having lived in the U.S. since the 1980s.

Ha Jin’s latest novel, The Boat Rocker, follows the story of Chinese expatriate Feng Danlin, a fiercely principled reporter at a small news agency that produces a website read by Chinese all over the world. Danlin’s explosive exposés have made him legendary among readers—and feared by Communist officials. But his newest assignment may be his undoing: investigating his ex-wife, Yan Haili, an unscrupulous novelist who has willingly become a pawn of the Chinese government in order to realize her dreams of literary stardom.

Ha Jin left his native China in 1985 to attend Brandeis University. He is the author of six previous novels, including Waiting and War Trash; four story collections; three volumes of poetry; and a book of essays. He has received the National Book Award, two PEN/Faulkner Awards, the PEN/Hemingway Foundation Award, the Asian American Literary Award, and the Flannery O’Connor Award for Short Fiction. In 2014, he was elected to the American Academy of Arts and Letters. Ha Jin lives in the Boston area and is a professor of English at Boston University.

Orville Schell, Arthur Ross Director of the Center on U.S.-China Relations at Asia Society, is a long-time China observer, journalist, and former Dean and Professor at the University of California, Berkeley. He is the author of numerous books on China, most recently Wealth and Power: China’s Long March to the Twenty-first Century.

The Boat Rocker will be available for sale and book signing at the event, and can be purchased through the Asia Store website.