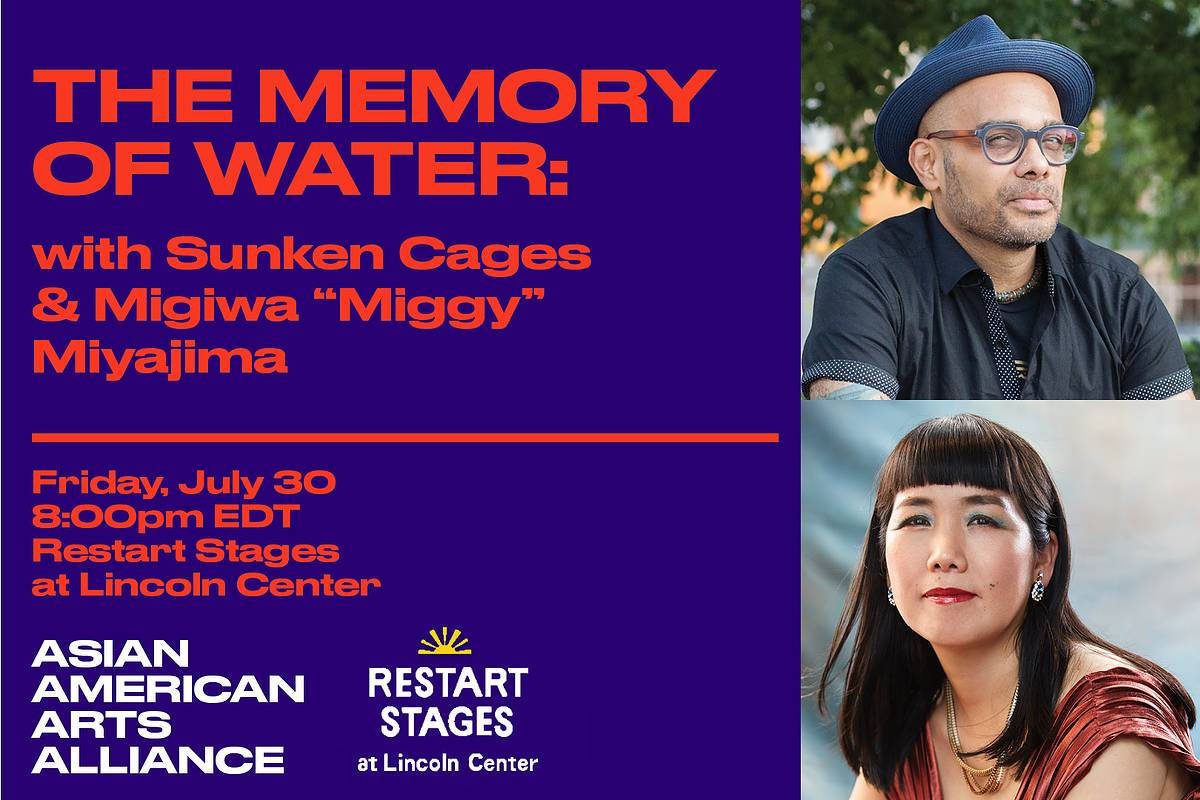 A4 + Restart Stages: The Memory of Water

As a part of the A4 community, use code: WATER21 and receive FREE priority tickets to The Memory of Water.

The Asian American Arts Alliance (A4), in partnership with Restart Stages, is pleased to present The Memory of Water, a full-length creative collaboration between beat-based experimental artist Ravish Momin, performing as Sunken Cages and jazz composer/performer Migiwa “Miggy” Miyajima with her quintet. This performance, which celebrates the mosaic-like patchwork of Asian American Pacific Islander identity and speaks to this current moment of renewal and civic collaboration, will take place on** Friday, July 30, 2021** at 8:00 p.m. at *Lincoln Center’s Damrosch Park.

Curated by the Asian American Arts Alliance, The Memory of Water will illuminate the power of oceans, with visuals depicting how water shapes our lives and music that evokes memories of the Japanese waters and the tenacious resiliency of the 2011 tsunami survivors. The performance will open with a set by Sunken Cages, accompanied by guest dancer Ishita Mili, followed by a set of original compositions by Miyajima’s quintet featuring musicians Steve Wilson, Freddie Hendrix, Pete McCann, and Noriko Ueda. The program will feature an interlude with the world premiere of “The Golden Miracles,” composed by Miyajima, featuring a blending of Sunken Cages’ beguiling visual and electronic textures alongside the acoustics of Miyajima’s ensemble. “Miracles” is dedicated to all American immigrants, the ancestors of today’s New Yorkers, who came here from beyond our immediate waters.

The Memory of Water will be presented as part of Restart Stages, the new outdoor performing arts center constructed on the Lincoln Center campus. As New York emerges from this pandemic, Lincoln Center has 10 outdoor performance and rehearsal spaces and civic venues to help kickstart the performing arts sector and contribute to the revival of New York City. Visit RestartStages.org for more.

Free tickets to attend The Memory of Water will be made available through the TodayTixLottery, the Official Ticketing Partner of Restart Stages. The TodayTix Lottery will open for entries two weeks before the performance and close three days prior to the performance at 12:59 p.m. Attendees who secure tickets will be required to follow safety protocols and follow recommended guidelines as the public health situation evolves. For more information, visit TodayTix.com or download the TodayTix app.

SUNKEN CAGES
Sunken Cages is the moniker of Ravish Momin, an Indian-born drummer and electronic music producer residing in New York City. His unique approach quickly led him to work with a diverse cast of musicians ranging from legendary avant-saxophonist Kalaparusha Maurice McIntyre (of the AACM) to pop-star Shakira. In the past, he led the Global/Jazz band Tarana whose line-ups had included violinist Jason Kao Hwang, Trina Basu, and many others. Tarana performed on international stages for 14 years and recorded several albums to critical acclaim.

MIGIWA “MIGGY” MIYAJIMA
Hailing from Japan, composer, producer, pianist, and bandleader of the 17-piece Miggy Augmented Orchestra, Migiwa “Miggy” Miyajima creates large-scale works manifesting her distinct life experiences. Formerly editor-in-chief of a magazine in Japan, Miyajima trusted the power of music and became a full-time musician at the age of 30. In four years, the Grammy-winning Vanguard Jazz Orchestra found her and brought her two Grammy nominations as its associate producer. After surviving the 2011 Great East Japan Earthquake, Miyajima received a Japanese government grant and a Japan-U.S. Friendship Commission Fellowship, and relocated to the United States. She is the recipient of numerous grants and awards including the 2019 Jerome Hill Artist Fellowship, 2020 NYC Women’s Fund for Media, Music and Theatre, and a 2021 Creative Engagement award from the Lower Manhattan Cultural Council.